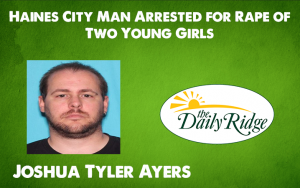 Joshua Tyler Ayers is being held on charges of 20 counts of custodial sexual battery and one count of sexual battery. One of the victims told police she was battered about 20 times. Another was sexually battered by Ayers last month. The two victims had become friends via social media and had arranged to have a sleepover and go to Legoland Florida last month. On Jan. 9, Ayers picked up one of the victims from Alachua County and drove her to his Haines City home where the other victim was also staying that night. On Jan. 11, Ayers sexually battered both victims at his home. The incident was reported by the mother of one of the victims on Thursday. Police obtained social media exchanges between a victim and Ayers referencing the incident. Ayers acknowledged the incident for one victim, but denied allegations made by the other. Police have obtained a search warrant and will review Ayers’ electronics. The investigation is ongoing. “The suspect’s actions are reprehensible, disgusting and unfathomable,” Chief Jim Elensky said. “We are going to do everything in our power to get justice for these victims. We will see to it that this suspect never harms anyone ever again.”
February 29, 2020