Frostproof Man & Others Charged With Trafficking In Methamphetamine 6.7 Pounds Seized 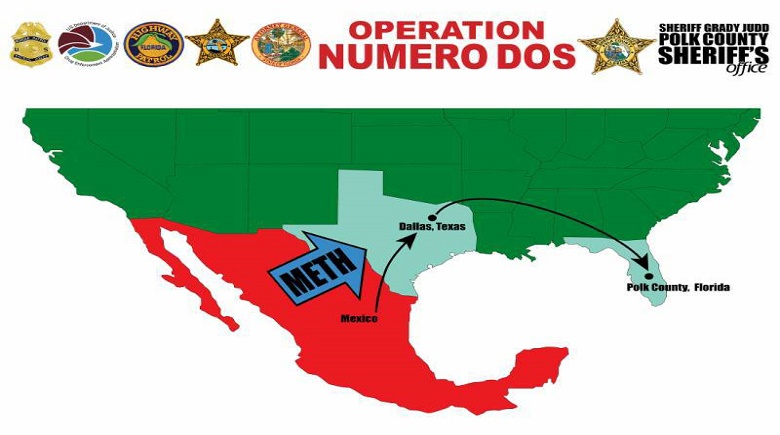 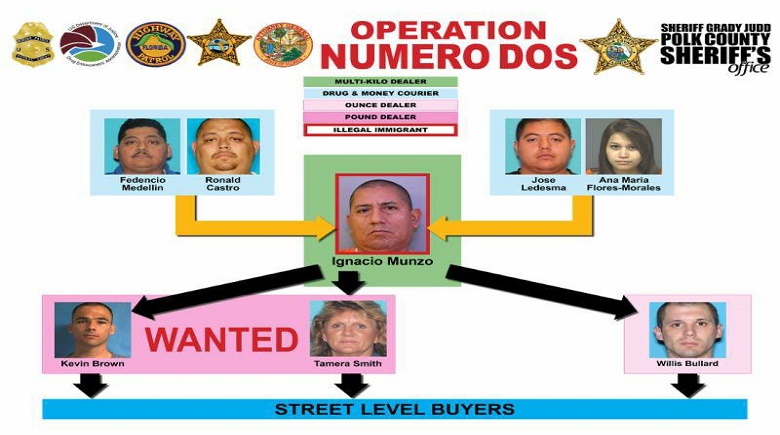 Frostproof, Florida – Don’t be fooled by those who would have you believe drug traffickers are somehow ‘minor, non-violent’ offenders. The drug trafficker in this case, Ignacio Munoz-Delgado, was armed to the teeth, including two AR-15s, a shotgun, and two rifles. And he was
arrested for armed Cocaine trafficking in 2009. He was in the country illegally then as he is now—he served a short sentence in prison and was deported to Mexico in 2010. Guess what: he came back again. Now he’s dealing in Methamphetamine. Lots of it. We know
Meth is one of the most destructive illegal drugs on the streets in central Florida.  It ruins lives, destroys families, fuels violence, drives up property crime, and wrecks neighborhoods. Anyone associated with it—especially those who sell and traffic it—are
doing violence to people and causing harm in our communities.” – Sheriff Grady Judd

“Munoz is exactly the kind of guy, a drug dealer with firearms charges, that the current administration is commuting sentences for or out-right pardoning. Of the 1,176 commutations during the Obama administration (so far), 211 included firearms charges.
Munoz was in the country illegally—he was released from prison, deported, and he’s right back at it again, trafficking in Methamphetamine, a drug that is so devastating to our community. Munoz is exactly the kind of guy—a convicted criminal drug trafficking
illegal alien—that the next president wants to deport to his country of origin after he serves his prison term.”  —Sheriff Grady Judd

From the first investigation detectives learned of a Polk County distributor who was receiving shipments of Methamphetamine from an unknown Mexican source. As a result of the follow-on investigation, the following were arrested here in Polk County:

43-year-old Ignacio Munoz-Delgado, 4 Garcia Lane, Frostproof – head of the Polk County organization; charged with Trafficking in Methamphetamine over 200 grams (F1), Possession of Drug Paraphernalia (M1), two
counts of Maintaining a Structure for drug trafficking (F2), Conspiracy to traffic in Meth over 200 grams (F1), unlawful use of a two- way communication device (F3), maintaining a residence for drug trafficking (F3), possession of stolen firearms (F3). (Munoz-Delgado
was arrested in April 2009 charged with Armed Trafficking in Cocaine and Conspiracy to Traffic Cocaine under an unrelated 2009 PCSO case.  After receiving a plea deal and serving approximately one year in prison, Munoz-Delgado was released in October 2010,
and deported to Mexico.)

Four suspects were arrested in Texas:

24-year-old Ana Maria Flores Morales, Hudspeth Avenue, Dallas, Texas – charged with Conspiracy to traffic in Meth over 200 grams, and unlawful use of a two-way communication device

25-year-old Jose Antonio Ledesma Rosa, Hudspeth Avenue, Dallas, Texas – charged with Conspiracy to traffic in Meth over 200 grams, and unlawful use of a two-way communication device

41-year-old Federico Antonio Medellin, East Corporate Drive, Lewisville, Texas – charged with Conspiracy to traffic in Meth over 200 grams, and unlawful use of a two-way communication device

39-year-old Ronald Castro, South Carrier Parkway, Grand Prairie, Texas – charged with to traffic in Meth over 200 grams, and unlawful use of a two-way communication device   There are two suspects at large with outstanding warrants.

Deputies are looking for:   55-year-old Tamara Smith, Chuck Wagon Way, Lake Wales – wanted for Conspiracy to traffic in Meth over 200 grams, unlawful use of a two-way communication device, and maintaining a residence for drug trafficking.

36-year-old Kevin Brown, Luke Street, Frostproof – wanted for Conspiracy to traffic in Meth over 200 grams, and unlawful use of a two-way communication device

During Operation Numero Dos, detectives identified the distributor who was receiving shipments of Methamphetamine from a Mexican source as
43-year-old Ignacio Munoz-Delgado. Munoz-Delgado had been previously arrested and convicted on Polk County drug charges and ultimately deported to his country of origin, Mexico. He since illegally returned to the U.S and to Polk County.

Through the investigation, detectives learned Munoz-Delgado was using local distributors and out-of-state curriers to run his drug trafficking business in Polk County.  Through the investigation, detectives learned
Munoz-Delgado provided Tamara Smith, Willis Bullard and Kevin Brown with large quantities of Meth which they would in turn resell to their own customers in smaller increments.

Detectives also learned Ana Maria Flores Morales, Jose Antonio Ledesma Rosa, Federico Antonio Medellin, and
Ronald Castro acted as curriers bringing shipments of Meth to Munoz-Delgado from Texas and taking payments back to an unknown source.  (The original source is thought to be from Mexico – the investigation is ongoing.)

On October 19, 2016, detectives coordinated a traffic stop by the Florida Highway Patrol and as a result, detectives seized $22,680 from
Flores and Ledesma; payment from Munoz-Delgado.

On November 20, 2016, detectives learned Castro and Medellin delivered methamphetamine to
Munoz-Delgado at his ranch.

4 Garcia Lane, Frostproof (Munoz-Delgado’s residence).  Inside the residence, detectives located five firearms, two of which were reported stolen from Highlands County; approximately $2,000.00 is U.S. currency, drug paraphernalia, and business ledgers
detailing Munoz-Delgado’s transactions. (The guns located were: two AR15s, a 12-guage Kel-Tec rifle, a 22 Marlin rifle, and a Russell 22 – the stolen guns were the Kel-Tec and one of the ARs.)

2942 Chuck Wagon Way, Lake Wales – the residence of Tamara Smith where a small amount of Meth was located.  Smith had left the county prior to the search warrant – she has an outstanding warrant for her arrest.

During the course of this investigation Kevin Brown was positively identified as mid-level methamphetamine dealer being supplied by Munoz-Delgado.  Brown has a long criminal history to include domestic battery, possession of methamphetamine, burglary,
larceny failure to appear, vehicle theft, weapons possession, cocaine possession, and carrying concealed firearm. Detectives learned Munoz-Delgado had been providing
Brown with pound quantities of methamphetamine each week and up to several times a week.
Brown has an outstanding warrant for his arrest.

Detectives traveled to Dallas, and working with the Dallas DEA Taskforce Group 1, conducted warrant arrests in which
Flores and Ledesma were taken into custody.  Flores was located at her residence where detectives seized $14,000 in U. S. Currency.

Munoz-Delgado – five previous felony arrest charges and 1 misdemeanor charge from 2009.
Munoz-Delgado was arrested in April 2009 charged with Armed Trafficking in Cocaine and Conspiracy to Traffic Cocaine under an unrelated 2009 PCSO case.  After receiving a plea deal and serving approximately one year in prison, Munoz-Delgado was released
in October 2010, and deported to Mexico

Willis Bullard IV – 23 previous felony arrest charges, 12 misdemeanor charges, and one failure to appear.
Bullard has been in state prison three times.  Beginning in 2003, Bullard has been charged with crimes such as: Possession of Short Barreled Gun, VOP, Dealing in Stolen Property, Smuggle into Detention Facility (Highlands County), Tamper/Fabricate Evidence,
Maintaining Vehicle/Structure/Dwelling for Drug Use, Possession of Firearm by Convicted Felon, Resisting, and multiple charges of Possession of Drugs-Methamphetamine-Amphetamine, and Possession of Drug Paraphernalia.