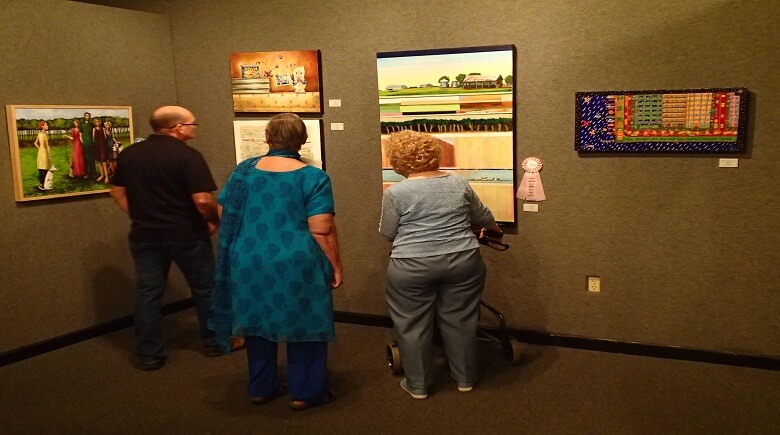 A beaded man with crutches waits patiently for his meal. A woman struggles to smile as she struggles to hold her first catch. A pagan priest walks across a bridge under which lurks a troll.

These three scenes were portrayed in the three winning art pieces at the 69th Anniversary Fine Art Exhibition in Winter Haven on Saturday.

The annual art exhibit honors the legacy of the Ridge Art Association, which has been providing a venue for local artists within Winter Haven and throughout the county since its founding in 1950.

As such, this art show is one of the organization’s most highly-participated event. This year accepted nearly 77 hanging art pieces, with 40 submitted pieces having been declined, explained Christy Hemenway, Executive Director.

“It was a fabulous show,” she said. “You can look around and see the quality of the artwork is amazing.”

Recent years have seen greater participation with art events such as this. This is most likely due to the overall economy having recovered since the economic recession nearly a decade ago, Christy explained.

“In the past few years, when…the economy was not as good, not as many people came out, people did not come as far,” she said. “So the economy is better now that more people are entering, and it is a wonderful thing.”

The awards that evening were provided through checks of $800 for best of show, $100 for awards of excellence, and $75 for honorable mentions.

The winners of the competition were as follows: 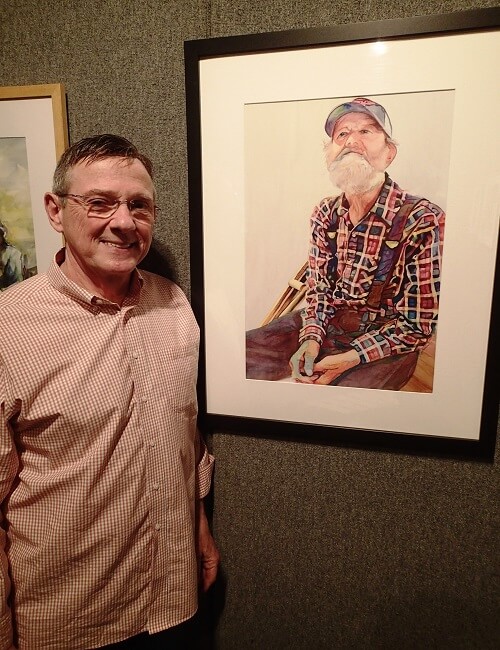 While visiting a small eatery called Aunt B’s in Tennessee, Ron Malone encountered an elderly bearded gentleman who hobbled in on his crutches and sat himself in the corner waiting for a takeout meal.

So awe-struck was Malone of the gentleman that he asked if he could take a picture of him. The old man said yes, and he became the subject of Malone’s award-winning watercolor.

The overall saturation of the color proved remarkable, and the very technique of the artwork created a flat image with tight colors and overall beautiful rendering, making it an obvious choice for first place, Hemenway said.

Though Malone was especially proud of his painting, enough so to enter it into the contest, he did not expect it to win anything, he said.

“I am shocked,” he said. “I never anticipated receiving an award like this.”

Having taken up watercolors three years ago, Malone has painted more than 100 paintings. Several have won awards, with one winning second place at last year’s art show, and another receiving a bronze medal at the Tallahassee Watercolor Competition.

Malone had always dreamed of being a painter, and being able to do so within the short amount of time has allowed him to express himself in ways that even surprise him.

“I wanted to take a break and do nothing but paint,” he said. “I love bringing out the expressions of a person…I enjoy it more and worry less to express what I am thinking about a person.” 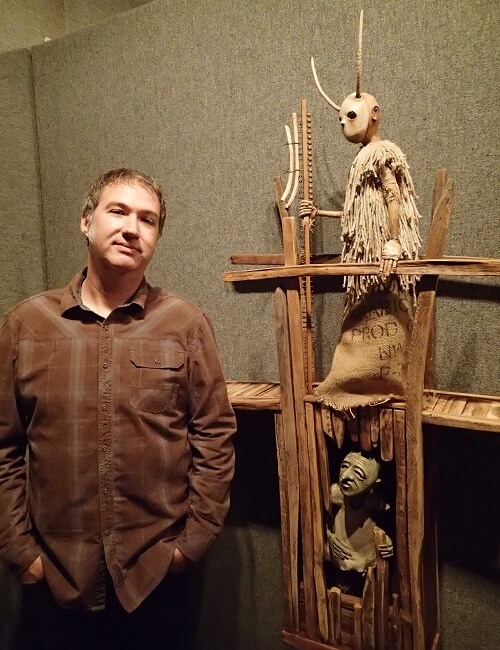 Trent Manning remembers many stories from his childhood fondly, including the subject of his winning piece, “The Billy Goats Gruff.”

Though a fairy tale of Germanic origin, Manning decided to offer the old story a new spin by incorporating elements of African, druid, and other pagan cultures.

As someone influenced by old stories and by other cultures, he uses his art to combine both interests to create something quite unique.

“I kind of put it all in a blender and spit it out as something new,” he said.

His winning piece shows a priest wearing a mask and ceremonial gown and carrying a walking stick as he traverses a wooden bridge, underneath which lurks a troll peering up at him.

As a full-time artist for the past 15 years, he loves the overall creation process, being able to transform his inspirations from his imagination into reality. Being able to showcase his art among other artists proved quite the humbling and honorable experience for him. 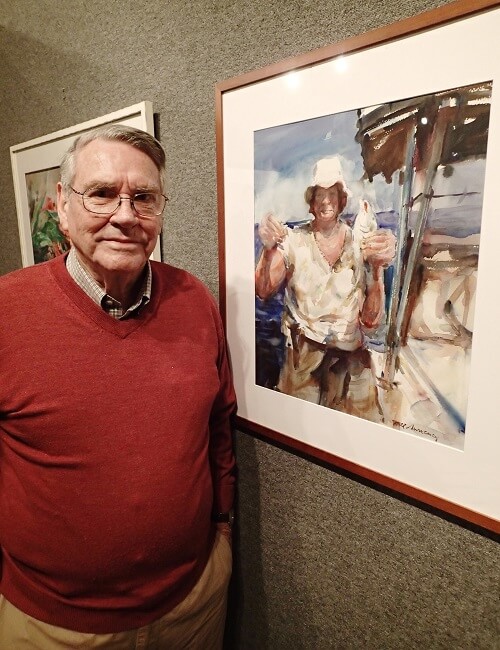 A woman stands upon a boat as she struggles to keep a hold of her first catch. Helping accentuate the entire scene is the cool blue colors of the surrounding water and the sky above.

Such a cool, gentle feeling is something that can only be encapsulated through watercolor painting, an art style most difficult to utilize and even harder to pull off successfully.

Ever since high school, where he received a scholarship from the Florida Federation of Art, Surrency has been interested in the arts and has created numerous art pieces himself both in New York and his home city of Winter Haven.

Currently, he has recently opened a new art gallery, Visual Concepts in Lakeland, which he has re-purposed for his own use and that of other local artists such as Malone.

Surrency has entered and won more than 100 art shows. While he would have loved to have won first place, he remains content with third place. 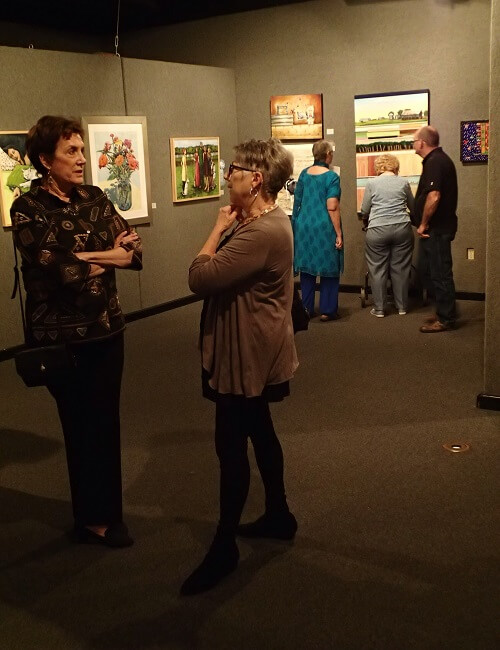 “Stand Off at the Dog Park” (Acrylic), by Pat Gooden (Winter Haven) 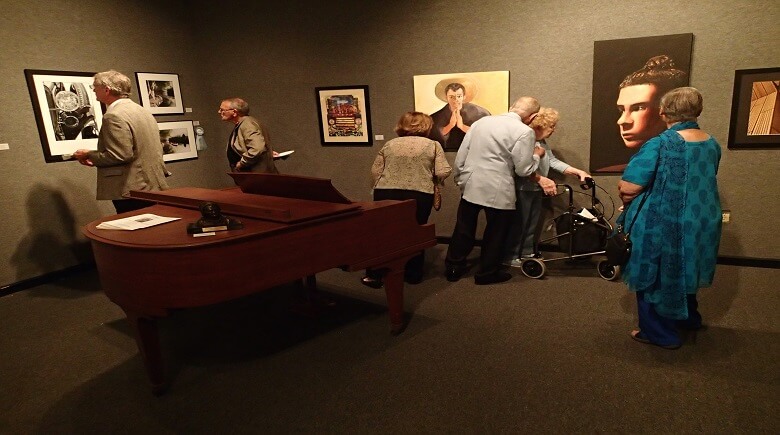 Writers On the Ridge: “The Light Prince: Grail” by J.C. Alexandre