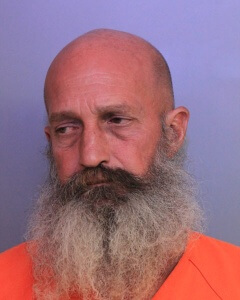 Auburndale, Florida – On Wednesday, August 31, 2016, Polk County Sheriff’s Office detectives arrested 50-year-old Duane Patten of Auburndale charging him with two counts of Lewd Exhibition and two counts of Lewd Conduct.
At approximately 7:00 pm, on Wednesday, August 3rd, Patten was home alone with two children he had access to – both children were under the age of 14. As the children were in the bathroom preparing for a shower, Patten walked in while the children were undressed and began talking about being a nudist with the children.
According to the arrest affidavit: “After the victims finished taking a shower, the suspect again entered the bathroom and offered to pay them both $5 dollars each if they could tear his shorts off his body. The suspect was not wearing any underwear and when the victims ripped his pants it exposed his buttocks. The suspect continued to ask the victims to pull on his pants and when they did it exposed his penis to the victims.