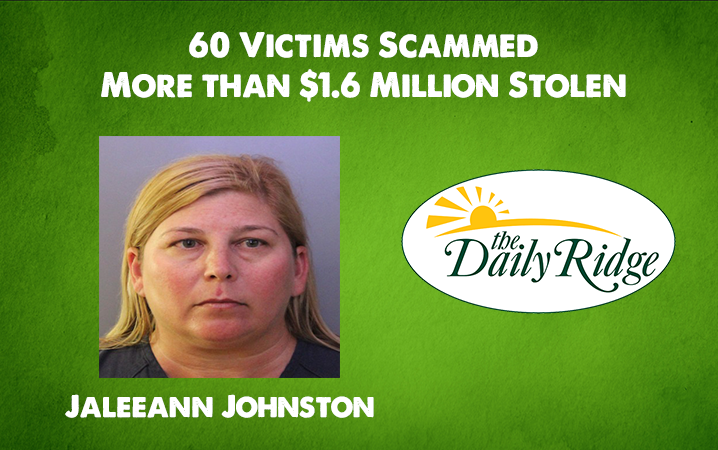 Winter Haven woman arrested by Polk County Sheriff’s Office after more than 60 victims scammed out of more than $1.6 million

Detectives from the Identity Theft Strike Force in the Polk County Sheriff’s Office arrested a Winter Haven woman on Thursday, February 13, 2020, after their investigation concluded that she had stolen or misappropriated approximately $1.6 million. 42-year-old Jaleeann Johnston victimized 64 individuals plus several financial institutions through her position as office manager and travel agent for Cruise Link Travel in Winter Haven.

One of the victims was Johnston’s employer, who was also a relative.

“The biggest victim by far was Johnston’s employer, who was also a close relative, her own flesh and blood. She more or less destroyed the woman’s business, and brought about substantial monetary losses and grief to her customers. Johnston’s scheme was unsustainable, and her greed just kept burying her deeper.”- Grady Judd, Sheriff.

The investigation into Johnston’s fraudulent activity dates back to November 13, 2018, when one of the victims reported that they had put a $339 deposit down on a cruise. The victim never got the cruise, nor a refund. One of the people who was supposed to go on that cruise with the victim then received a credit card charge of approximately $13,000.

From there, detectives uncovered similar cases and the investigation grew. It was found that Johnston used the operational account for Cruise Link Travel for day-to-day business and personal expenditures. She also used other people’s bank information to support her personal lifestyle and to cover costs of other cruises. Johnston would cover her tracks by shifting the blame to other businesses involved in the transactions.

Most of Johnston’s victims incurred losses through fraudulent use of their credit card information.

Most financial institutions were able to complete charge backs which resulted in minimal or no financial losses.

Money was also discovered to have been moved around by Johnston, through accounts with Citizens Bank and Trust, CenterState Bank, and TD Bank. Johnston was also transferring money through the accounts of Florida Best Peaches and Cruise Link Travel, companies which were owned by a close relative of Johnston.  That relative was the victim who suffered the bulk of the losses to Johnston’s fraudulent activity, approximately $1.3 million.

A comprehensive review of accounts and a forensic audit of accounts associated with Cruise Link Travel, Florida Best Peaches, and the primary victim, aided the detectives in tracking Johnston’s illegal activity.  A total of 66 forged checks were found, in addition to phone and electronic transfers that documented the theft.

Johnston is also the subject of similar investigations being conducted by Lakeland and Bartow police.