Duo Paves Their Way To Jail

Last week, Polk County Sheriff deputies arrested 28 year old Brandon Hayes and his “business” partner, co-defendant 25 year old Adam Keel, for grand theft, fraud, failure to secure workman’s comp insurance, and conducting home solicitations without a license. All of which are felonies, except the solicitation charge. Hayes and Keel were spotted by deputies on Gerber Dairy Road in Winter Haven in the work truck you see below, with “Big City Asphalt” on the door, conducting unsolicited paving work at two different houses. 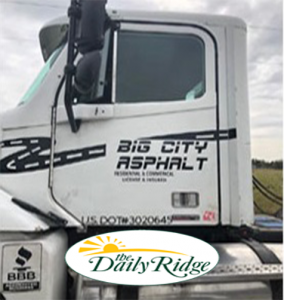 The first victim they approached, they asked for $7,000 cash to pave his driveway. The victim didn’t want the work done, but they wore him down to the point he agreed to pay them $2,000 to pave a portion of it. When we say wore him down, they really aggressively worked on the homeowner – repeatedly calling him and even FaceTiming him. The problem is, the work the suspects actually conducted was way below industry standards – they simply threw down a layer of dirt mixed with some asphalt, and sprayed a coat of diesel fuel over the top it. Now he’s out $2,000. While our detectives were investigating this incident, they found another victim down the road. He paid them $5,500 – they swiped his credit card the same day, and that victim’s money is gone. They did the same shoddy job at his house.

Polk County detectives confirmed with the Florida Department of Insurance Fraud that “Big City Asphalt” does not have workman’s comp insurance – a third degree felony. The suspects admitted (and detectives confirmed) that they do not have a permit to conduct home solicitations in the state of Florida. They told our detectives that they stay in hotels along US Hwy 192 in the Kissimmee area (another common tactic of scam artists like these) and they don’t provide invoices or even contact information to their “customers” so there is no recourse. They admitted to putting a mixture of dirt and asphalt on the driveways and spraying it with diesel fuel, and then overcharging the victims.

Both suspects have bonded out of jail, and our concern is that they might still be up to their old tricks. We don’t want anyone else to get scammed, so please be on the lookout for these two, and their truck.

Hayes’ criminal history includes 2 previous aggravated assault charges, Keel has been arrested for violation of bail bond. They now each have 8 felonies on their records. 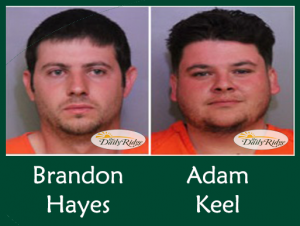 If you’ve dealt with these two suspects or this business and feel you’ve been defrauded, please call PCSO to report it at 863-298-6200.