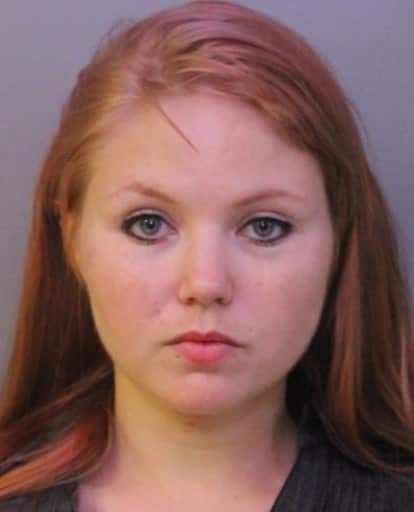 On October 10, 2019 at 12:35 a.m., Highlands County Sheriff’s Office Detective Charlie Peck received information of Doranda Ussery’s location.  He contacted Lake Wales Police Officer Mary Jerome and told her Ussery was at the Imperial Swan Hotel, 4141 South Florida Avenue, Lakeland, FL.  Officer Jerome in turn contacted Lakeland Police Officer Chad Landry and gave him this information and of Ussery’s active warrant.  Officer Landry located Ussery at the hotel.  She barricaded herself inside of one of the rooms upon the sight of law enforcement.  After a short period, Ussery surrendered.  Officer Landry contacted Officer Jerome back and let her know Ussery was in custody.  Lake Wales Police Detective James Lewis responded to the scene.  Ussery gave Detective Lewis a full confession.  Ussery was taken to Polk County Jail on her warrant for aggravated assault with a deadly weapon, grand theft and battery.

Thanks to Highlands County Sheriff’s Office and Lakeland Police Department for their assistance in putting this dangerous person in jail. It is great to live and work in a community where law enforcement agencies work together so well.  It is a great benefit to the citizens we serve and whom we care so much for.

On Sunday, September 29, 2019 shortly after 5:47 a.m., Doranda Jo Ussery, of Avon Park, entered Walmart at 2000 State Road 60 East and quickly escalated a minor shoplifting incident into a violent felony.  Doranda shopped for over two hours before heading to the self-checkout registers.  Loss Prevention approached Doranda and told her not to forget to pay for the sunglass and backpack she had picked up and was wearing.  Doranda said she no longer wanted the glasses and said the backpack was her boyfriends.  Doranda paid for $16.34 worth of items and headed toward the exit with multiple Walmart bags of items while still carrying the backpack.  Doranda set off the security alarms after passing all points of sale and an associate stopped her.  Loss Prevention approached Doranda and asked her to return to the store.  Doranda fled into the parking lot dropping several cards with her name on them.  Loss Prevention told Doranda they now had her identified from the information on the cards and turned to go back in the store.  Doranda followed Loss Prevention back to their office and said she would return the stolen merchandise if they did not call law enforcement.  Doranda said she was on probation and had two children.  Loss Prevention began recovering the stolen property, which totaled $358.23 and doing their paperwork. Before Loss Prevention could contact law enforcement to respond, Doranda removed a can of pepper spray from her purse and charged them, spraying it in their face.  Loss Prevention attempted to gain control of Doranda, at which time she sprayed two other associates that were in the office with them.  Loss Prevention was able to remove the pepper spray from Doranda’s hand at which time she stated, “I have a knife.” Doranda had armed herself with a knife that had a blade of three to four inches long.  Doranda made a motion as if she were going to stab Loss Prevention and even raised it over their head.  Loss Prevention believed they were in a fight for their life.  The two associates were able to escape the room and block Doranda’s swing of the knife while backing away.  Doranda fled out the office and Loss Prevention ran out behind her.  Doranda ran into the parking lot, entered the passenger side of a red Chevrolet Cruz and left the area.  The Lake Wales Police received a call of a disturbance involving a weapon and responded.  Officers were unable to locate the vehicle or Doranda.  The tag number on the Cruz lead officers to work with law enforcement in Highlands County.  They located the vehicle and the driver.  Law enforcement in Highlands County was also familiar with Doranda.