Voices Of The People Kick Of 8th Season With D2 Concert

Derek Menchan, Professor of Humanities and Music, when not teaching at Polk State College, loves to perform his music across the country and world. Often he loves to travel to different places and perform for different people. 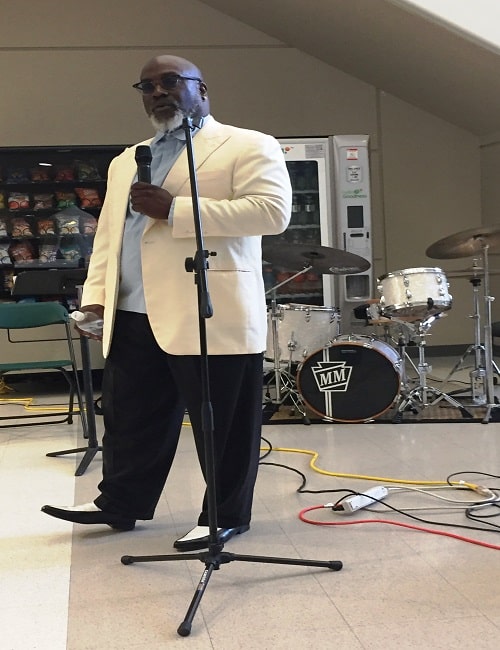 “I figured rather than take Mohammed to the mountains, we bring the mountains to Mohammed, and I invented this so I could bring my friends here and jam,” he said. “I invented this series to bring musicians together to entertain my home county. That is what brings us here.” 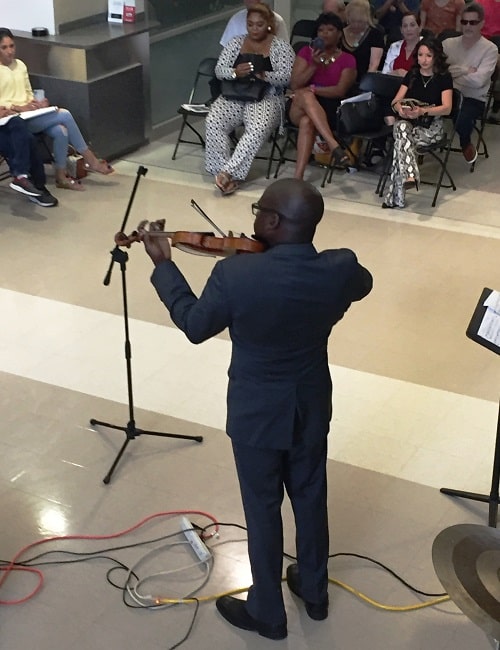 Menchan kicked off the eighth anniversary season of Voices of the People with a small concert in the LTB Atrium of the Lakeland Campus on Saturday. 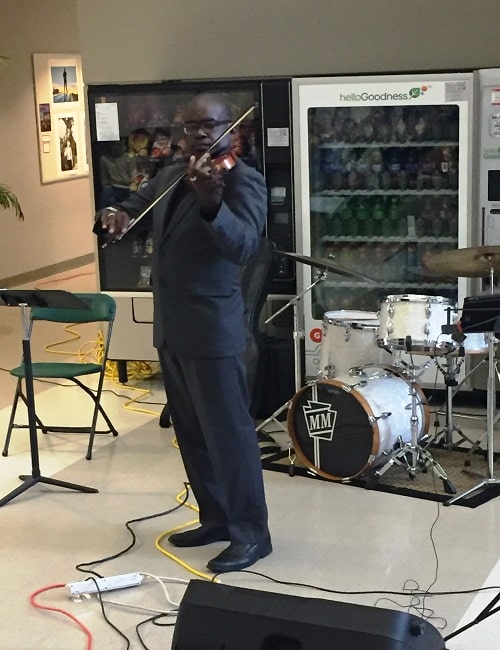 Titled D Squared, that evening’s performance featured the eclectic blending of genres from jazz to blues, with musical stylings provided by him and a few close friends, including violinist Derek Reeves, guitarist LaRue Nickelson, and Marty Morell on drums. 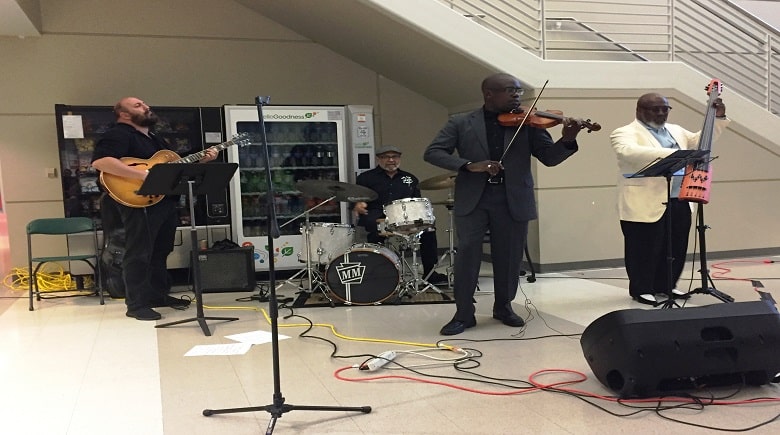 Entertaining a large gathering of attendees that evening within the atrium of the school building, the four each took turns introducing their own unique musical styles through individual performances before coming together to blend those styles into an even more eclectic blend of styles and genres.

Menchan himself has been praised for his own unique style. Considered an “ubercellist” by Inside Houston Magazine, his style has been described by other publications such as Jazzcorner.com as presenting a “technical precision and sense of honesty [that] is hard to match in the music scene today.” 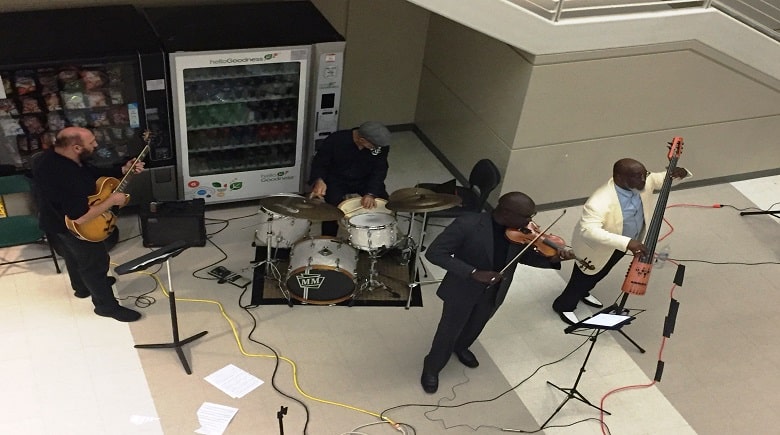 He recently experienced success in releasing his debut album “The Griot Swings of the Classics”, which rose to #2 on Amazon’s “Hot New Releases” chart, and #4 on its “Contemporary R&B Chart.”

The founding member of Voices Of The People, created voices was for locals to experience world class musicians of color playing some of the world’s finest music, without having to change counties or even states.

“I think very carefully about the personnel I hire and work furtively to match musicians of complementary temperaments and tones. It’s like using colors on a palette for painting; it is a subtle but all important balance.  I look to experiment with that even more, to include the music I program, to provoke and engage an ever-widening number of artists and music lovers.”

Derek Reeves, a music professor at Purdue University who has also traveled and performed extensively, was one of those talented individuals chosen to kick off the music series that evening.

This was his second year performing at the Voice of the People concert series. He had played many times with Menchan, collaborating with him previously for four to five years.

Reeves appreciates the “out-of-the-box” thinking that his friend, Menchan, brings to the table, allowing their performances to be anything but ordinary.

“I just wanted the opportunity to collaborate with my good friends and play some good music,” he said. “He is an outside the box thinker, very musically eclectic, well-versed, and skilled, so he is great and a pleasure to work with.”

This performance was no exception. For a small gathering at a small campus of a large county-wide university, Reeves appreciated the turnout that evening and the reception from the participating guests, both students and locals.

“It went beautifully,” he said. “It was a lot of fun. The audience seemed energized and engaged. It felt good. I had a blast. [I loved] The opportunity to communicate great music with people. There is nothing like the energy of live performance and being able to share art with other people.”

Menchan himself was likewise impressed by the reception and turnout. While the county may not have a large musical scene like Los Angeles or New York, the praise they received that evening proved that there is an audience for their music. This sets his expectations high for upcoming shows.

For more information about upcoming shows by Voices Of The People, visit their Facebook page at: https://www.facebook.com/Voxpopuliplayers/