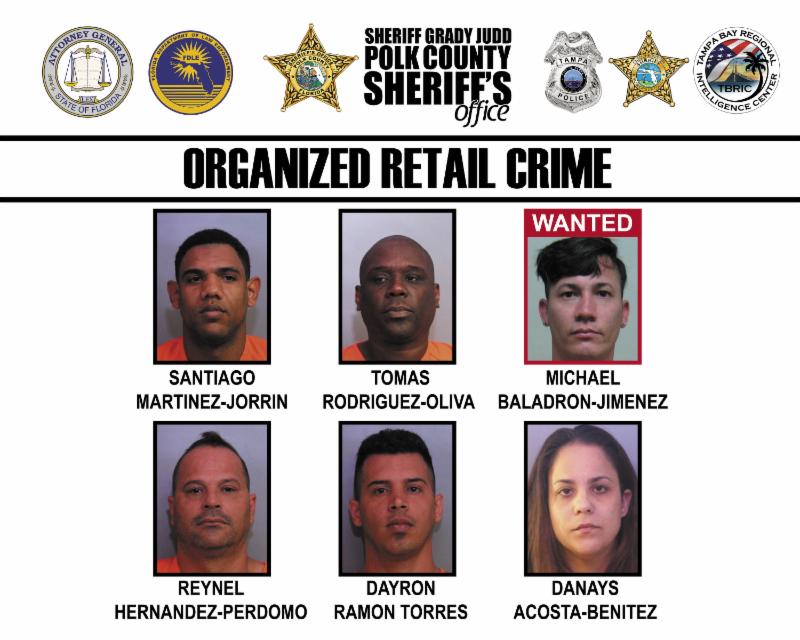 According to their affidavits, the suspects engaged in an ongoing course of criminal conduct between four and five nights a week, hitting 8 to 10 businesses each day. Of the 150 reported thefts in the state, at least 25 thefts occurred in Polk County, and PCSO investigated cases involving the theft of between $150,000 to $200,000 worth of merchandise. It is estimated the six suspects have stolen over $2 Million worth of goods statewide. The suspects took the stolen merchandise to several different locations and sold or “fenced” it, including shipping stolen goods to Cuba, and profited from it, resulting in felony racketeering charges.

“Partnerships are what make the difference between a good investigation, and a great one. When we work together not just with other law enforcement agencies, but with our retail loss prevention professionals, we can successfully apprehend and prosecute those who make their living stealing hundreds of thousands of dollars’ worth of merchandise and dealing in stolen property. Not a single one of these suspects actually has a job. Upon their arrests, they all said they were ‘self-employed.’ We’re happy to announce that their new occupation is ‘jail inmate.'” – Grady Judd, Sheriff

Attorney General Ashley Moody said, “I applaud our statewide prosecutors and law enforcement partners for shutting down this massive theft ring across our state. These crimes increase prices for Florida consumers and our office will aggressively pursue those who steal from Florida businesses.”

“When agencies work together like this, it is bad news for the criminals and very good news for the community. This was a well-organized criminal enterprise that victimized stores all over West Central Florida. Now these criminals are out of business.” – Brian Dugan, Tampa Police Chief

The investigation began when Publix organized retail crime investigators contacted PCSO in reference to a group of suspects who were committing retail thefts in their stores, stealing mainly health and beauty items such as dental whitening strips, over the counter medications, electric toothbrushes, and razors, as well as clothing and shoes, and then selling them on the black market. The suspects mainly used backpacks and soft-sided coolers to conceal and steal the merchandise.

The detectives also identified the following fencing locations within the Tampa Bay area:

PCSO has filed a total of 31 felony charges against the six suspects so far – the investigation is ongoing, and more charges are pending.

Three of the suspects have criminal histories, with a combined total of 33 previous felony and 9 previous misdemeanor charges.

At the beginning of the investigation, suspect Santiago Martinez Jorrin was arrested by HCSO for two retail thefts at a Publix store in Sun City. After his arrest, working with the TBRIC, detectives identified one of his accomplices as Tomas Rodriguez Oliva, who drives a red Toyota Corolla. The Corolla was observed at several subsequent retail thefts, with Rodriguez Oliva driving and another associate, Michael Baladron Jimenez as a passenger.

Surveillance videos and photos of these three suspects and the suspect vehicle were shared with loss prevention personnel and detectives at partnering agencies, and the case began to build. The suspects were seen stealing and attempting to steal merchandise using a small soft-sided cooler and a backpack. They were also seen taking stolen merchandise to the barbershop and Cuba la Bella business, to be illegally sold.

The owner of the barbershop was identified as Dayron Ramon Torres and Reynel Hernandez Perdomowas renting a room there. During surveillance, detectives observed several suspects dropping off bags loaded with stolen merchandise at the store. They also saw stolen merchandise being moved from the barbershop to the business next door, Cuba la Bella Services, a travel agency owned by Danays Acosta Benitez. Several people were seen coming and going with merchandise, either dropping off stolen goods or coming to purchase it.

Detectives loaded all of the stolen merchandise seized during the search warrants into a 26-foot box truck and transported it to PCSO to be processed. The total value of the amount recovered is approximately $125,000, and detectives are working with loss prevention personnel to determine when and where the items were stolen. During the search warrants, detectives recovered duffel bags and suitcases packed with stolen merchandise, ready to be taken by mules to Cuba. That part of the investigation is ongoing.

That same day, PCSO detectives along with HCSO and TPD located five of the six suspects in Hillsborough County and placed them under arrest. They were booked into the HCSO jail on the Polk warrants, and were all transferred to the Polk County Jail.

Click here to see video from the search warrants and arrests.

WANTED – Deputies have a warrant for Michael Jimenez’s arrest: