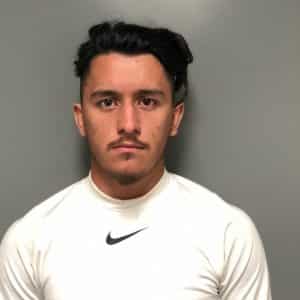 On Friday April 26, 2019 Lake Wales Police Detectives arrested 19 year old Gustavo Adolfo Martinez of Frostproof after he arrived at a location believing he was there to meet a 13 year old girl for sex.

The case began Friday morning when an alert McLaughlin Middle School administrator observed an 13 year old student talking with an adult male (Martinez) several blocks away from the school. After speaking with the girl at school, administrators learned Martinez had been communicating with the child via social media for around one year. Martinez began sending the child explicit nude photographs of himself when she was 12 years old and discussed various sexual acts with her. Detectives learned Martinez had sexual intercourse with the child just prior to the McLaughlin administrator observing them together.

A Lake Wales Police Detective began communicating with Martinez posing as a child during the day and arranged to meet him Friday afternoon. Martinez arrived at the location on time and he was promptly taken into custody. During an interview after his arrest Martinez admitted to the relationship and admitted he had sexual intercourse with the girl Friday morning.

Gustavo Adolfo Martinez was charged with the following:

1. Lewd or Lascivious battery which is a 2nd degree felony.

2. Using an electronic device to lure or entice a child which is a 3rd degree felony.

3. Traveling to meet a minor which is also a 3rd degree felony.

4. Sending obscene material to a minor which is a 3rd degree felony.

5. Unlawful use of a two way communication device which is a 3rd degree felony.

6. Driving with no driver’s license which is a misdemeanor.

Martinez does have a criminal history which consists of domestic battery.

This case is an excellent example of alert school staff and law enforcement working together as a team to put predators like Gustavo Adolfo Martinez behind bars.

If you have information regarding this case please contact Detectives Ive Rodriguez or Whitney Dukes at 678-4223. If you wish to remain anonymous you can contact Heartland Crime Stoppers at 1-800-226-TIPS (8477).