Getting children to eat their vegetables can be hard, especially if you live in a food desert or a climate where growing and obtaining fresh produce can be even harder.

Middle school students at Lakeland Christian School figured out a creative solution to get other children invested in growing and eating their own produce. Their idea won them first place at the SlingShot Polk 2019 science competition at Crystal Lake Elementary School on Monday evening. 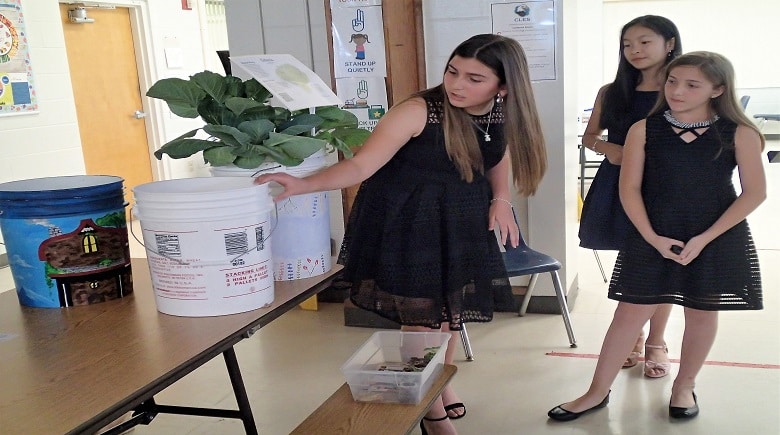 Called “The Bucket Farm Project”, their invention encourages young children to grow their own produce using a miniature garden planted within a set of buckets. These buckets are specially-crafted and developed to provide the best combination of soil, fertilizer, and water to allow their vegetables to grow in any climate, especially that of Florida.

“We observed at our own school that when kids grow their own vegetables, they are more likely to actually eat it,” said Yuexin Quin, one of the three middle school students. “Our bucket farms will teach them it is important to have vegetables in their diet.” 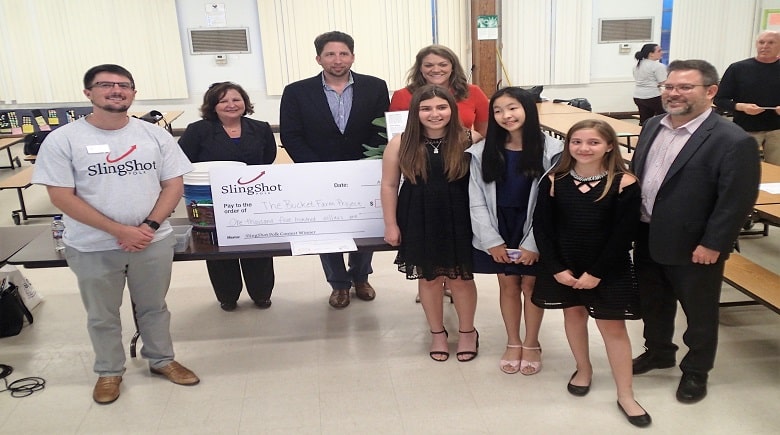 Quin and her two other teammates, Nicole and Mya Rivera, developed the miniature garden prototype using three five-gallon buckets, each of which fit within one another. One bucket serves as a reservoir, holding one gallon of water, which wets the soil using a pantyhose as sort of a wick, explained Nicole.

Each bucket farm comes with a special bar code, which can be scanned to access a website with recipies for the different vegetables that can be grown. Each farm costs approximately $13.25, though the cost can be potentially reduced to $7.25, Nicole said.

These bucket farms are planned to be sold at local farmer’s market. For each bucket farm sold, another will be donated to community gardens and schools, Nicole said.

“We hope to spread our ideas all over the United States, many different places, to give kids the opportunities to grow and eat their own vegetables,” she said.

Their Bucket Farm Project allowed them to win the $1,500 prize for first place at SlingShot Polk, an annual science competition that encourages middle, high, and college students under age 29 to think like entrepreneurs and develop solutions to problems facing their community. Four other teams from four other schools across the county also participated that evening for a chance to share their entrepreneurial endeavors. 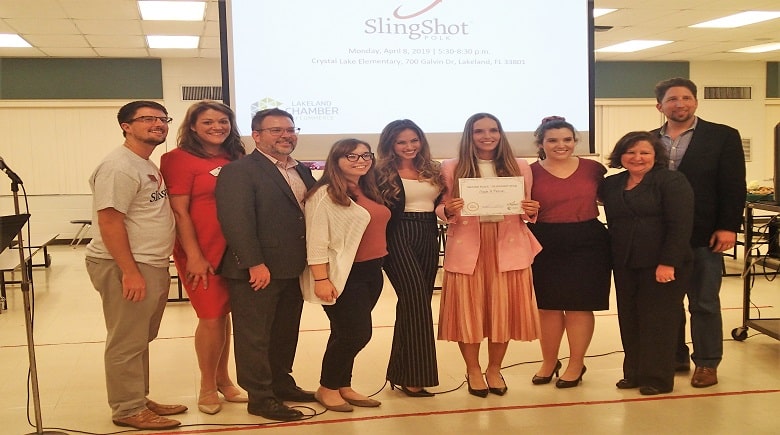 Second place went to students from Florida Southern College for their project, “Grade A Fashion”, a retail fashion boutique that allows students to purchase clothing in exchange for credit gained by improving their grades, behavior, and good citizenship.

These boutiques would be set up within low income and underprivileged schools within the county, and allow students to purchase clothes by earning credits through good grades, attendance, and various volunteer opportunities. 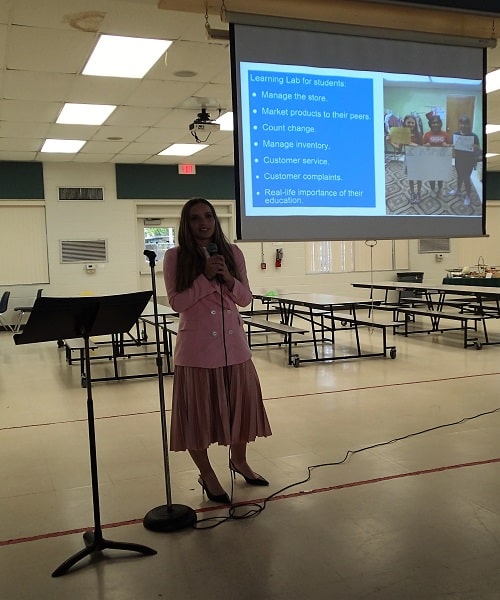 Natalija Popovic, one of the students within the team, felt that positive reinforcement was a great motivator to allow children to complete their homework and focus on their studies. Not only would this allow children in low income areas an opportunity to improve their education, but also to obtain nice clothing they otherwise would not be able to receive, she explained.

Their first store is already set to open later this week at Southwest Elementary School in Lakeland on Friday, April 12. Clothing for the store is being donated through partnerships with local churches and laundromats, Popovic said.

“Our expectations are that kids will have…money to shop, and that they will be slowly improving their grades and attendance in order to shop even more,” she said. “We are very grateful because it shows us that other people see the value of this project, as much as we believe in this project.” 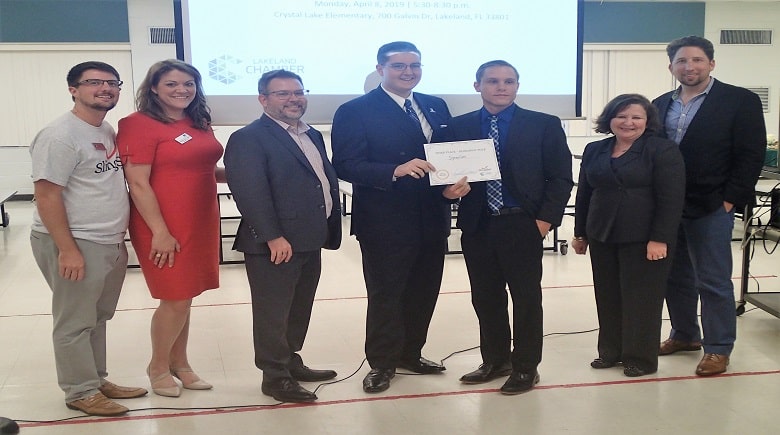 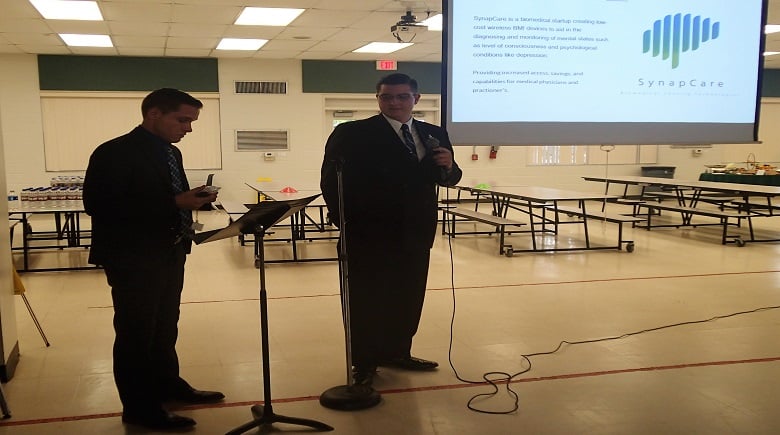 Third place went to Florida Polytechnic University students for their project, “SynapCare”, which will provide personal electroencephalogram (EEG) devices that can detect changes in mental health. Their initial prototype will be programed with an algorithm to monitor depression, but other devices may be program to detect other disorders, allowing its users to track their mental health the same way they can track their heartrate using a smart watch. 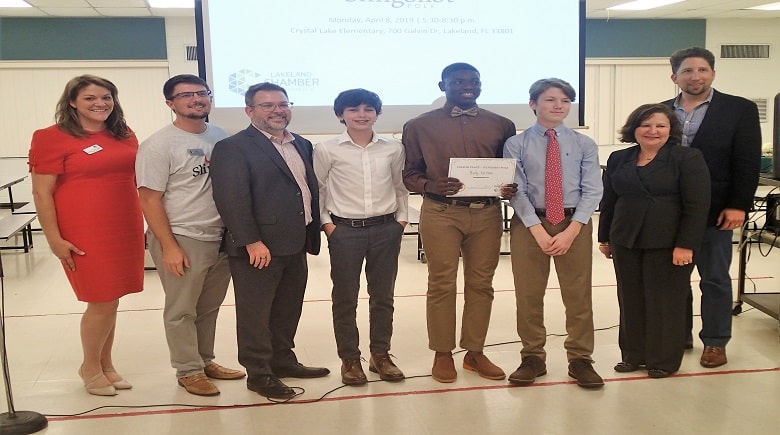 Fourth place went to McKeel Academy of Technology for their project “Bully No More”, a smart device app that can be used to report incidents of bullying to school officials and access resources for bullying victims. Fifth place went to Bok Academy students for their project, “Tycoon Game”, a video game where players can learn financial literacy by running a virtual business. 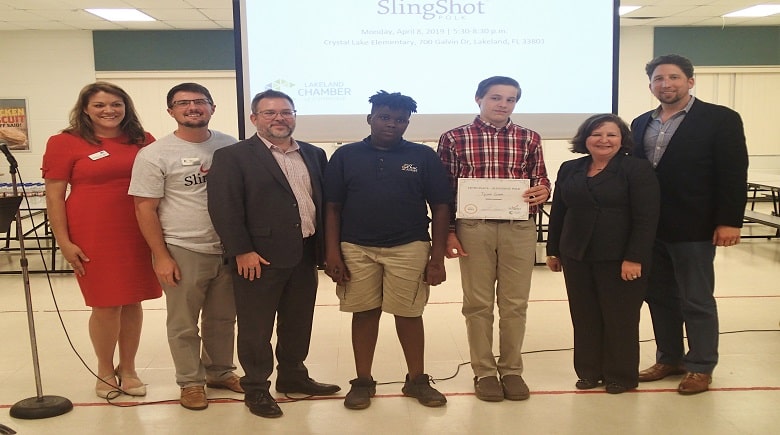 SlingShot Polk is a collaboration between the Lakeland Chamber of Commerce and United Way of Central Florida to “identify and solve the biggest problems in Polk County”, according to their website.

While many similar science competitions are focused on giving money to an idea, this competition encourages students throughout the county to become more hands on in their endeavors and actively work on solutions towards solving problems in their county, explained Justin Heacock, Coordinator Entrepreneurship with Florida Polytechnic.

“The exciting thing is that we had a middle school team win, they beat out two college student teams, it is kind of amazing,” he said. “No matter how big the problem, there is always a way to solve it, and it starts with being creative, and what SlingShot has done is to create a pipeline to take that creativity through.”

Central Florida Development Council served as the main sponsor for this year. Sean Mallot, President and CEO, was most impressed by the projects entered in this year, as it showcases the ingenuity of the young people within the county.