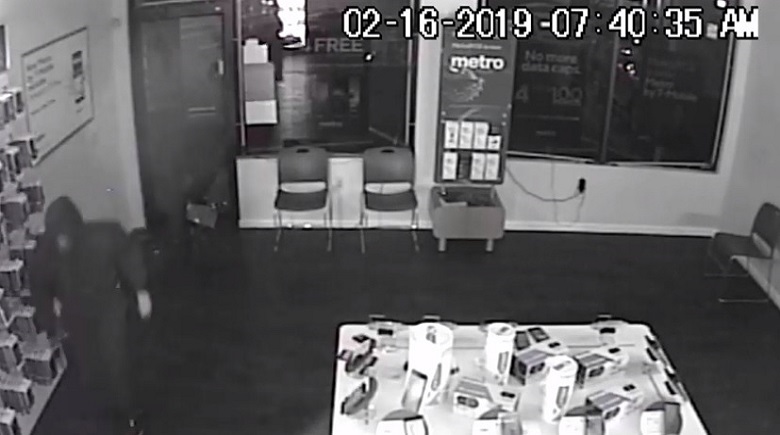 On February 16, 2019, deputies responded to burglaries at the shopping mall located at 5711 South Florida Avenue in Lakeland. At this location, the EZ Wireless Store (Metro PCS) and the Magic Touch Hair Salon were targeted by thieves driving a minivan.

At approximately 6:53 a.m., PCSO received an alarm call indicating the EZ Wireless store had been broken into. The front door was smashed in as well as the business next door, the Magic Touch Hair Salon, where the suspects left behind a tire iron/lug nut wrench.

Video surveillance outside the location shows three to four likely male suspects pulling into the parking lot in a dark colored newer model Town N Country minivan. Three of the suspects exited the vehicle and used a scissor jack to forcibly break the front glass window of the EZ Wireless Store. They then grabbed two boxes of recycled cell phone cases before breaking into the hair salon where they stole the cash register.

The Great Clips business located at 2018 CR 540A in Lakeland was also burglarized around the same time the same way. Entry was made by using the car jack to smash the front door glass. The same suspects are seen on video-they removed miscellaneous items from the back office before fleeing the scene. They were also seen riding in the same minivan.

The suspects wore hoods covering their faces and gloves on their hands.

If you have any information about these burglaries call Detective Sinclair at (863)-499-2400 or contact Heartland Crime Stoppers at 1-800-226-TIPS (8477) to remain anonymous and be eligible for a reward if your information leads to an arrest.

You may also visit www.heartlandcrimestoppers.com to provide a tip.