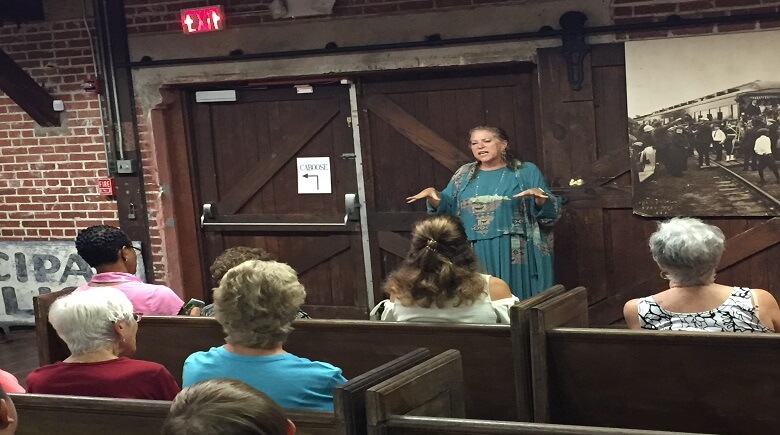 One evening, two brothers sneaked into the backyard of their elderly neighbor to steal the fruit from his orange tree.

Once they had filled their sack, they carried the oranges in the dead of night to a cemetery. They scaled the wall and managed to get their stolen goods across, save two oranges that fell out.

The two brothers sat within the dead of night and in the dead center of that cemetery, certain that no one would see or hear them counting their stolen oranges.

As one brother counted and divided the oranges between him and the other, he said out loud, “Una para me, Una para ti. One for me, and one for you.”

Meanwhile, two drunks approached the cemetery on their way back from the bar. Both of them slumped against the wall, where they heard the two brothers talking.

Frightened, the two drunks thought the voices were St. Peter and the Devil dividing up souls between themselves.

“What should we do with those two near the wall?” one brother asked, pointing to the two oranges that fell near the wall.

“Those are bruised and bad,” the other brother said. “They’re no good. You can have him.”

Fearing the voices were referring to them, the two drunks raced as far away as they could from the cemetery.

Neither of them visited the bar ever again, and they made sure to go to church every Sunday.

This story was one of many that bilingual storyteller Carrie Sue Ayvar told during her presentation at the Lake Wales Museum on Thursday evening.

From stories about a mouse that scared away a cat by barking like a dog, to a chicken that wanted to marry a cockroach, Ayvar shared her old folk stories that had been passed on down to her and many others from generation to generation.

Not only did her storytelling manage to entertain listeners of any age, but also of any language, be their native tongue English or Spanish, as she simultaneously told her stories in both.

Ever since Ponce De Leon first landed on Florida’s shored in 1513, the state’s heritage has been intertwined with Hispanic culture, she said.

Not only is the state’s name Spanish for “flower” but many cities (such as St. Augustine) and creatures (such as the alligator) are derived from Spanish words.

“No matter if you were born here, everyone has added to the state’s unique stories and histories, our own unique flavors to our unique state,” Ayvar said.

Through her storytelling, Avyar takes her listeners on a journey to enlighten them about different cultures and reveal how we are all similar in spite of our cultural differences.

Born in Pittsburgh, Pennsylvania, Avyar comes from a very diverse background. She is an Eastern European Jewish woman with an Arabic surname with Hispanic grandparents and a Native American husband.

As a child, her parents would visit her grandparents in Florida in the summer months. Both of them were avid storytellers whose stories had the power to transport their listeners to different places without ever leaving the house.

Now she uses her skills as a third generation storyteller to educate others about history and culture through her own storytelling. 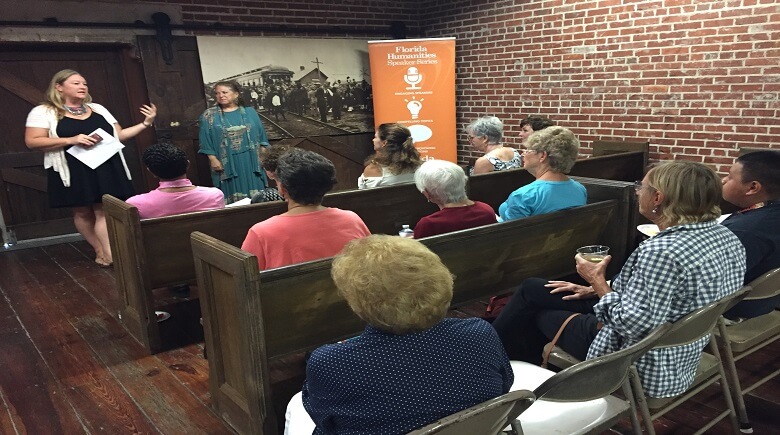 “You want to know what is important in a culture or a community?” she said. “Listen to their folk tales. That will tell us what is of value. It tells us where we came from and where we are right now and where we hope to go in the future.”

For her nationally-acclaimed storytelling, she has received an award for the National Storytelling Network’s Oracle Award for Service and Leadership.

However, as a bilingual storyteller of mixed heritage, she has also been the recipient of negative feedback, especially in the form of prejudice.

Her own family has been targeted through discrimination. Many of her relatives, including her son, have been stopped and questioned by law enforcement.

Because of the current political enviroment, Ayvar feels her storytelling is important now more than ever. She believes her stories have the power to educate people and show them that we are all more similar than we are different.

“That is why it is more important,” she said. “Because they [my relatives] have been stopped, they have been questioned, just for the way they look and who they are….So I do think it is important. We are all connected, and stories help us connect.”

Her presentation was part of the museum’s Speaker Series: Stories of Florida, a five-part series that invites speakers to talk on a range of topics concerning local and state history.

The five-part series is funded through a grant from the Florida Department State, Division of Cultural Affairs and the Florida Council on Arts and Culture.

Jennifer D’hollander, Lake Wales Museum Director, was especially impressed by this speaker’s multicultural presentation and bilingual approach, as it helped to showcase the Hispanic heritage of the local and state community in a way that was both enlightening and engaging.

“I think that it helps connect us with our history,” she said. “That is what we are here to do, to help people connect with their history, and if we can pull that in through multicultural experiences, we can reach more of the different cultures here in Lake Wales.”

For more information about the museum’s speaker series, visit their Facebook page at: https://www.facebook.com/Lake-Wales-Museum-128131233866221