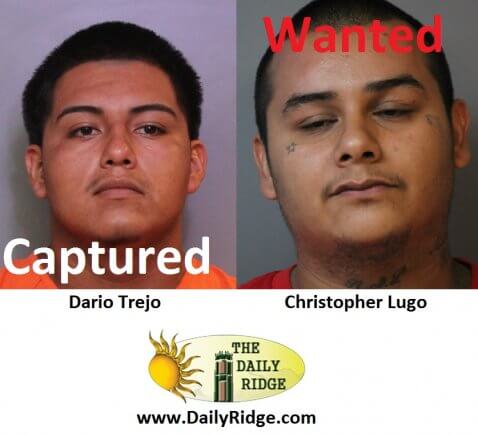 “Being involved in a gang is extremely dangerous – these two rival gang members, while shooting at each other, ended up killing a 17-year-old. Parents, don’t let your kids become affiliated with gang members. Get in their business, and make it your business to keep them from hanging out with gang members. The mere affiliation with someone involved in a gang can mean the difference between life and death.” – Grady Judd, Sheriff

In summary, through the investigation detectives learned that Trejo and Lugo had an altercation at a gas station during the day on Monday, July 3, 2017. Trejo later picked up two friends in his Cadillac – Christopher Garcia and Jose Tinoco – and drove along Tennessee Road. Trejo told his friends that someone had “tried him” at the gas station, and they were going to look for him.

Lugo has been living at 2602 Tennessee Road for the past four months. When Lugo saw Trejo’s Cadillac drive by the house, turn around, and come back, Lugo fired a shotgun at the Cadillac, striking Tinoco in the face, and Trejo in the arm. Trejo then returned fire with a handgun, fatally wounding Jake Castillo, who was inside the home on Tennessee Road.

Excerpt from affidavit: “Based on the statements of the suspect and witnesses, the evidence recovered at the scene, and the totality of the circumstances, detectives have determined probable cause exists to charge John Lugo and Dario Trejo with manslaughter with a firearm. Their actions in furthering an altercation and furthering gang related issues contributed to the unlawful killing of Jake Castillo.”

As previously reported, Trejo and Lugo belong to rival gangs, Sur 13 and Norte 14, respectively. On July 3, 2017, Trejo was booked into the Polk County Jail with 7 counts possession of Alprazolam, one count possession of paraphernalia, and one count tampering with evidence. The new felony charge of manslaughter is being added on today.

Anyone with information on the whereabouts of John Lugo is urged to call Heartland Crime Stoppers at 1-800-226-TIPS (8477), or visit www.heartlandcrimestoppers.com. iPhone and Droid users can download a free tip submit app to anonymously report crime. To install these free apps, please visit www.tipsoft.com.

PCSO deputies are continuing to investigate the shooting incident that resulted in three men shot on Monday, July 3, 2017, on Tennessee Road in the Wabash area of unincorporated Lakeland. The incident occurred around 7:45 p.m.  17-year-old Jake Andrew Castillo of Tennessee Road died as a result of a gunshot wound to the upper torso.

Soon after deputies responded, they found a shooting victim at a home on Tennessee Road.  Jake Castillo had been shot and they began life-saving measures. Castillo was transported to LRHMC and later succumbed to his injuries.

According to witnesses the white Cadillac drove past the house, turned around, and slowly approached the residence. The witnesses indicated shots were fired from both outside the home and from passengers inside the Cadillac. The Cadillac veered into a ditch a short distance from the home.

Shortly thereafter Lugo fled the scene. PCSO has issued an arrest warrant for Lugo for possession of a firearm by a convicted felon. Detectives are trying to locate Lugo.

“If you know where John Lugo is, or if you know have more information about what happened Monday night, please call Crime Stoppers.” -Grady Judd, Sheriff

If you have information about the shooting incident or the whereabouts of John Lugo call Heartland Crime Stoppers at 1-800-226-TIPS (8477), or visit www.heartlandcrimestoppers.com.You must call Crime Stoppers to be eligible for a cash reward of up to $3,000!By calling Crime Stoppers you will remain anonymous. iPhone and Droid users can download a free tip submit app to anonymously report crime. To install these free apps, please visit www.tipsoft.com

Trejo has been arrested and charged with seven counts possession of Xanax (F), tampering with evidence (F), and one count possession of drug paraphernalia (M), booked into the Polk County Jail, and is being held on no bond.

PCSO is continuing to investigate; further criminal charges are expected.

Update 11:36pm: 17 year old wheel chair bound Lakeland teen, Jake Castilla, gunned down outside home during apparent drive by shooting. Three Hispanic males were in the vehicle. A subject at the hime returned fire with a shot gun. Two hispanic males in the vehicle were shot and are in Lakeland Regional Medical Center, according to Sheriff Grady Judd.

Jake Castillo was wheel chair bound due to a previous drive by shooting when he was 11 yrs old, per Sheriff Grady Judd.

PCSO deputies are investigating a shooting that resulted in three men shot on Monday, July 3, 2017, in the area of Lebanon Road and Tennessee Road in the Wabash area of unincorporated Lakeland. The incident occurred around 7:45 p.m. One man is deceased and two men were transported to LRHMC – one as a trauma patient and one with minor injuries.

According to witnesses a light colored four door Cadillac Deville drove down Lebanon Road and a number of gunshots were fired. Two victims in the vehicle were shot and one man was shot at 2642 Lebanon Road.

17-year-old Jake Andrew Castillo of 2602 Lebanon Road died as a result of a gunshot wound to the upper torso.