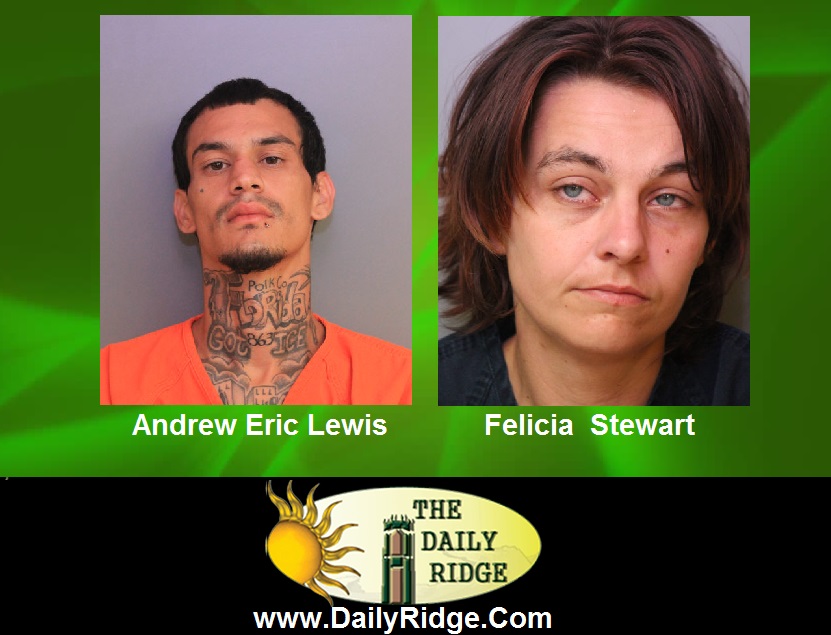 Lake Wales, Florida – On Friday, March 10th, Lake Wales Officer Jones was conducting traffic enforcement in the area of Scenic Hwy and Dr. J.A. Wiltshire Ave. Jones observed a blue Chevy Monte Carlo with a license plate that came back unassigned. The driver, later identified as Andrew Eric Lewis, allegedly refused to stop and accelerated in the attempt to flee and/or elude from law enforcement. Officer Jones realized Lewis was not going to stop, he deactivated his siren and lights and cancelled the attempt to stop the vehicle. Jones located the vehicle a short distance from where they fled. As Jones approached the vehicle he observed Lewis and the passenger, later identified as Felicia Stewart, running from the vehicle. Lewis and Stewart ran West and then ran South into the woods between the train tracks and Central Ave.

While officers were in route to set up perimeter a witness came out of the Paws & Perches Animal Hospital and flagged down an officer. She informed the officer that two people just ran in and went to the bathroom. Lewis and Stewart were located inside the animal hospital. Lewis and Stewart were taken into custody at that time. Lewis was arrested for fleeing or attempting to elude law enforcement, resisting officers without violence, trespassing, and knowingly DWLSR. Stewart was arrested and charged with resisting arrest. Both subjects were transported to the Polk County jail without incident.