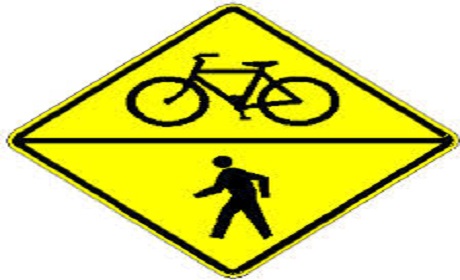 Auburndale Police Department Partners with the Florida
Department of Transportation and USF’s Center for Urban Transportation Research (CUTR) to Address Pedestrian and Bicycle Safety
The Auburndale Police Department was awarded a grant to pay overtime for officers to specifically address pedestrian and bicycle safety within areas of the city where a higher number of bicycle- and pedestrian-related crashes have occurred over the past several years.
The campaign is a component of Florida’s Bicycle/Pedestrian Focused Communication & High Visibility Enforcement Initiative under the direction of FDOT and USF’s Center for Urban Transportation Research.
Tragically, deaths and injuries in Florida are nearly double the national average for pedestrians and triple the national average for bicyclists.
Auburndale Police officers working in the four pre-established areas under this grant spent the first several months concentrating on education, providing educational and safety materials, and issuing written or verbal warnings in most routine cases during the first several months of the reporting period that began on December 1, 2015. Officers will begin issuing more citations during the final few months of the grant in order to drive home the importance of paying attention and following the law in order to stay safe. They will also continue to distribute educational materials and safety equipment to pedestrians, bicyclists, and motorists throughout the grant period in order to remind people of the hazards that exist and to encourage safe habits by everyone using the roadways.
Please go to www.alerttodayflorida.com for pedestrian and bicycle safety tips and information.
Pedestrian safety tips: Walk facing traffic, or on a sidewalk if there is one available; Cross roadways in crosswalks and/or at intersections and not at mid-block; Wear light colored clothing at night and try to cross roadways in areas at night that are well lighted.
Bicyclist safety tips: Ride with traffic, or on a sidewalk in the direction that traffic is moving on that side (so you are seen by drivers exiting driveways and side streets); Do not wear headphones or ride while impaired by drugs or alcohol; Wear light colored clothes AND have a working headlight and taillight when riding at night.