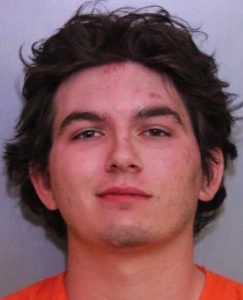 21 Year-Old Facing Felony Charges After Stealing a $5 Bottle of Wine From WaWa
Early this morning (2/7/20) at approximately 3:50 a.m., 21 year-old Tristan Allen (22nd St., SW, Winter Haven) walked to WaWa from Howard Johnson obviously wanting some wine. Allen found the bottle of his choice, stuck it under his arm in an obvious attempt to steal it and walked right out of the doors.
The clerk observed the activity and the direction he walked and called for an officer. Having the description of the subject, Officer Mike Kelley found Allen walking back to WaWa from Howard Johnson. As Allen entered the parking area of WaWa, Officer Kelley stopped him and told him he was being detained for suspicion of theft.
Allen attempted to run and Officer Kelley was able to grab Allen’s arm and escort him to the ground. Allen continued to struggle and elbowed the officer in the face. Officer Kelley was able to gain complete control of Allen and placed him under arrest.
Allen was booked into the Polk County Jail for Resisting an Officer With Violence (F.S.S. 843.01) F-3, Battery on Law Enforcement Officer (F.S.S. 784.07) F-3 and Petit Theft (F.S.S. 812.014) M-2.