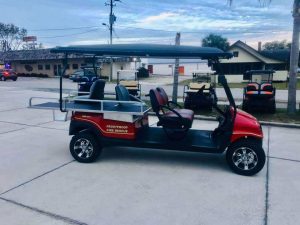 During the Youth Fair in Bartow over the weekend, one man, while attending to a calf, was head-butted to the ground by a heifer. The incident left him with some injuries that required him to be transported out.

The fair draws in crowds with students from schools all across the county. With so many people there, the event is extremely packed and nearly impossible to navigate through, explained Jerry Riner, Frostproof Fire Chief.

“Every school in Polk County is here,” he explained. “Any one time, it is very tough for an ambulance to get in and out to where they have the livestock and pigs, so it is hard to get them here.”

As such, for incidents such as these, a smaller vehicle like a golf cart or an all-terrain vehicle comes in handy to help transport patients out of such situations and towards an awaiting ambulance. 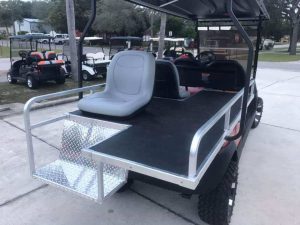 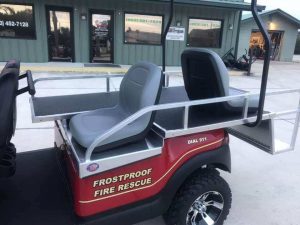 Their former chief had established a program that would allow them to obtain a small vehicle such as a golf cart or ATV to use in such situations, making it easier for them to carry patients to an awaiting ambulance.

The need for such a vehicle arose last year during a local football game. A football player had sustained significant injuries that required him to be transported via ambulance. However, moving him using a stretcher proved extremely cumbersome, Riner said.

“We could loose our footing, it was not the safest way to take someone off the field that was injured,” he said.

Following that incident, the fire department members formed a committee and discussed the possibility of obtaining a smaller vehicle. They approached the City Manager and City Council about the matter, and they all agreed to procure the funds to obtain such a vehicle. 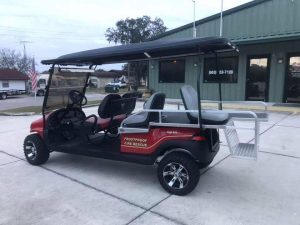 The department purchased a golf cart from Victory Golf Carts in Avon Park and retrofitted to add a backboard, which would allow the medical personnel to better attend to the patient being transported to an ambulance.

Riner thanks the members of the City Council, along with the City Manager, for supporting their endeavors and allowing them to purchase a valuable piece of equipment, which he hopes his department will make good use of.

“My expectations have already been met,” Riner said. “It is helping our community, especially when we are in Bartow. It is not just Frostproof, it is the whole county. So that right there has beat my expectations. It has been received very well.”