This Laundromat Was Robbed Twice, Yet It Still Offered One Month Of Free Laundry To Two Families

This Laundromat Was Robbed Twice, Yet It Still Offered One Month Of Free Laundry To Two Families 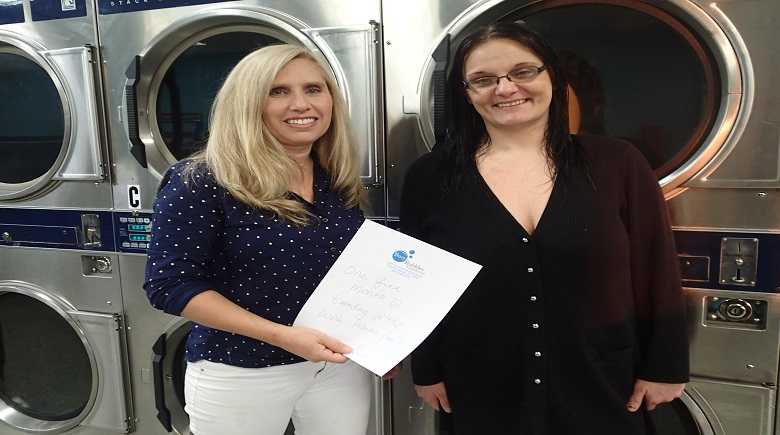 Doing laundry can be a real chore for Winter Haven resident Siara Bosworth. For the past month, she’s been forced to use her bathtub to do her laundry. She can’t even afford laundry detergent, so she often uses whatever soap she can find including dish soap.

Not making matters easy for her has been her arm, which she broke several months ago. Her husband likewise hurt his foot in an accident and has been unable to return to work since. As such, both of them have been experiencing hard times this past holiday season.

Fortunately, the next month appears to be much brighter, as they have been gifted with a free month of laundry at Busy Bubbles Laundromat in Winter Haven. Siara was entered into a contest, and was one of two individuals to receive the prize. The other lucky contestant was Dianne Montanez of Lakeland.

“I am super excited about that,” Siara said. “It is hard for me to wash out laundry in the tub…I really want to thank you all so much. It is all amazing.”

Stephanie Griggs Durden, owner of Busy Bubbles Laundromat, has always sought ways to give back to her community. This Christmas, she decided to give the gift of free laundry for one month to two lucky individuals at both her Winter Haven and Lakeland locations.

Recently, the laundromat fell into hard times after being robbed multiple times at both locations. The laundromat was first robbed in November at their Lakeland location, and then several weeks later in December at their Winter Haven location.

While the culprits did not steal a lot of money, they did create a lot of damage at the Winter Haven location, breaking the change machine and tearing up the back wall, Stephanie said. One person involved has already been arrested, but the other culprits are still being sought after, Stephanie said.

Since then, Stephanie has tried to fix the damage to her store. Her insurance has since helped cover the cost to most of the damages, but the whole ordeal has left her low on funds, she said.

Nevertheless, even in spite of being the target of crime and financial difficulty, the laundromat was still able to give back to its local community by offering one month of free laundry to two local in need.

“We always try to help some family in need each Christmas,” Stephanie said. “This is a way we can give back without it hurting us more financially. It can be a blessing to somebody.”

Busy Bubble Laundromat first opened in Winter Haven eight years ago. Their Lakeland location opened two years ago. During that time, Stephanie has always sought ways to give back to her local community. At least one week every year, they offer a week of free laundry to the local homeless.

Currently, the laundromat is seeking donations of laundry detergent and fabric softener that can be used by the winners of the one month of free laundry, as well as by other people who need it most.

“We are trying to help anyone that we can help out,” Stephanie said.