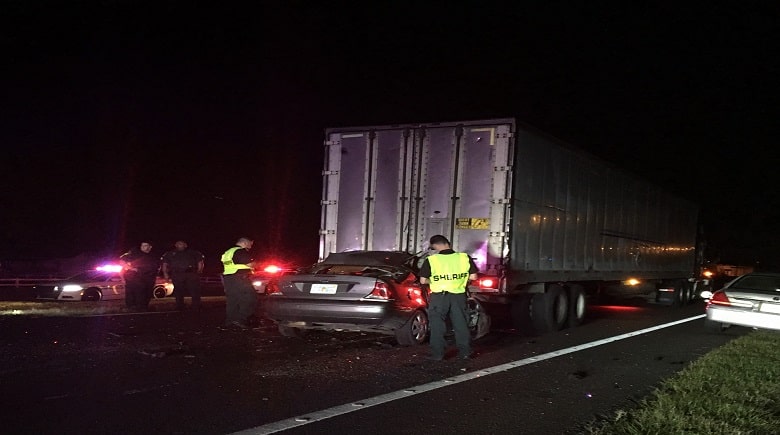 On October 11, 2019, at approximately 1:12 a.m. the Polk County Sheriff’s Office and other emergency personnel responded to a two vehicle crash with injuries on US 17/92 near Fletcher Trailer Park Rd., Haines City. On arrival, 21-year-old Thomas Rivera, Jr. of Haines City was found entrapped and deceased inside his vehicle, a 2004 Ford Focus. The second driver, 49-year-old Artis Tillery of Jacksonville was not injured and remained on scene. He was driving a 2012 Freightliner Tractor w/White Box Trailer.

US 17/92 in the area of the crash is an east/west 4-lane highway with a 60 mile-per-hour speed limit located between the cities of Haines City and Lake Alfred. It has a grass median and grass shoulders on both sides of the roadway. It was dark at the time of the crash with limited external illumination from nearby businesses.

Evidence at the scene and interviews indicate that the 2012 Freightliner semi-tractor pulling a white box trailer, was eastbound on US 17/92 just east of Fletcher Cut Off Road. The tractor-trailer was in the outside (right) lane traveling at a slow speed due to a mechanical issue with the truck. Mr. Rivera was driving a 2004 Ford Focus also eastbound in the outside (right) lane at highway speeds. It appears that Mr. Rivera did not see the semi-truck and ran into the rear end of the trailer. The Ford Focus traveled approximately 6 feet under the trailer causing significant intrusion into the front half of the passenger compartment, resulting in fatal injuries to Mr. Rivera. Both vehicles came to final rest in the outside lane approximately 10 feet east of the point of impact.

The driver of the semi-truck told deputies that he was traveling at a slow speed with his hazard lights on due to a mechanical issue. He was attempting to get his vehicle to the Freightliner dealership in Haines City for repairs.

The truck driver, Mr. Tilley, has a suspended license, which had been suspended on October 1, 2019, for failure to pay child support. Mr. Tillery told deputies he was unaware of the suspension.

The eastbound lanes of US 17/92 were closed in the area of the crash for approximately four hours during the investigation. The investigation is ongoing and any possible charges are pending its completion.