When Kiara Hawkins received a flyer about the grand opening of Gander RV in Bartow, along with the many activities provided at the event, she thought it would be a decent outing for her and her 8-year-old daughter, Jacayla.

The two of them enjoyed being able to take a close look together at the different RVs on display, and Jacayla even had the opportunity to have her face painted like the character on her shirt, Princess Poppy from the animated movie Trolls.

Young Jacayla was even able to try her hands at shooting a BB gun at the inflatable shooting range being provided that day by In-Gauge Of Polk County. She was initially shy about the experience, but afterward, she very much enjoyed it, her mother said. 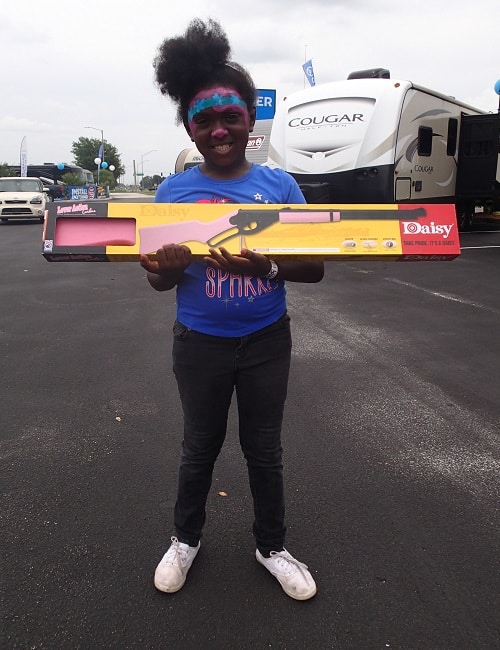 Not only was she able to shoot a gun at the inflatable range several times, but she was also lucky enough to win the raffle ticket drawing for a pink toy BB gun.

“We decided to try the event and see if she was comfortable with a gun,” Hawkins said. “At first, she was scared. But since we have been here, she has shot eight different times. She was drawn to win, and she won a BB gun.”

Jacayla was one of many lucky young people who were lucky enough to win a prize during the raffle drawings hosted on Saturday during the grand opening of Gander RV in Bartow. 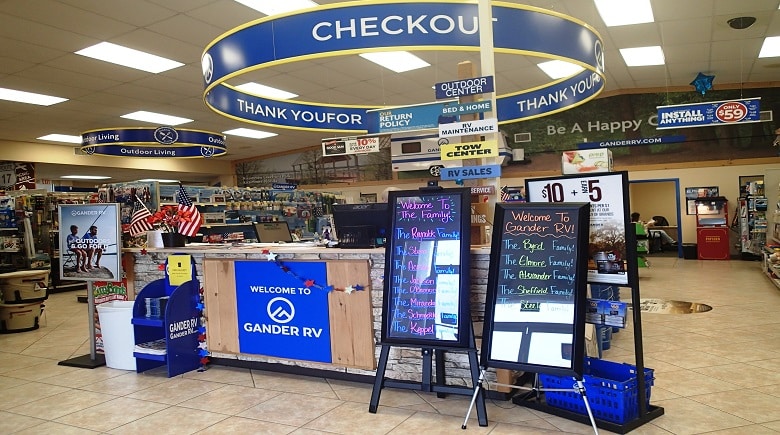 The grand opening allowed visitors a close look at the new business and merchandise. They could also engage in many activities, from face painting, corn hole tossing, live musical entertainment, and free food such as hot dogs, chips, soft drinks, and snow cones. 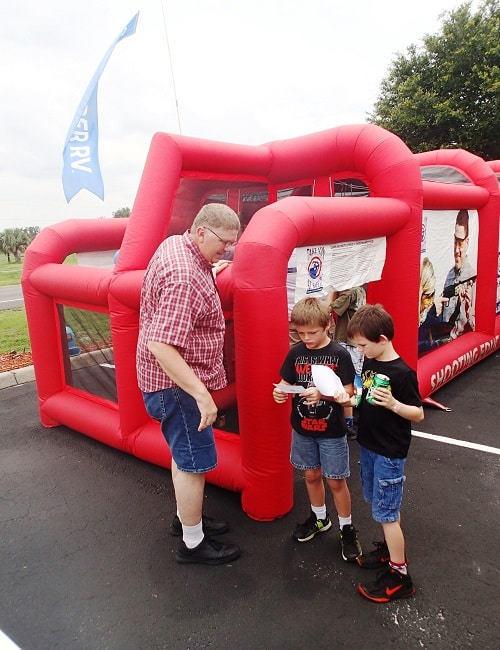 In Gauge of Polk County assisted with the event by providing their inflatable shooting range, where guests young and old could take aim and shoot a BB gun at targets. In-Gauge also offered several raffle drawings for toy BB guns, including the famed Red Ryder BB Gun as made famous in the classic movie, “A Christmas Story.” 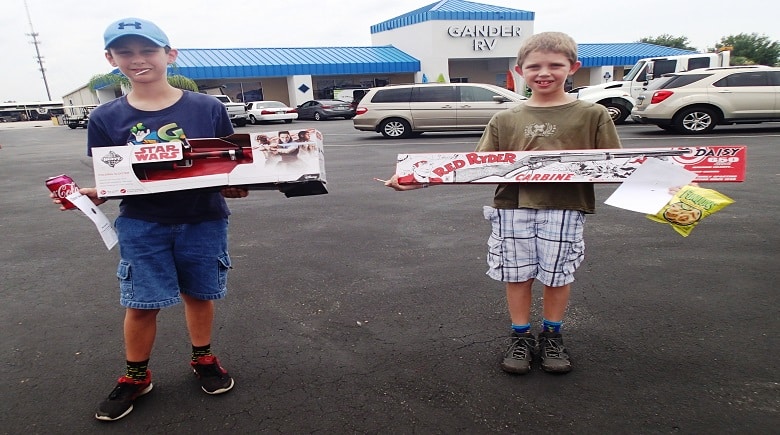 Kenneth Henson is the father of two boys who were fortunate to win the drawings that afternoon. His youngest son, John, 10, won a BB gun, while his oldest son, William, 12, won a scooter. Henson took the opportunity to peruse the many RVs on display at the facility. While he’s still searching for what he’s looking for, he certainly appreciated being able to visit the new business.

“It seems like a really nice place,” he said. “I really love the layout they have here, and the selection that they have.”

Formerly Camping World, the facility opened under its new name, Gander RV, earlier in May. While it still offers Camping World brand RVs and gear, it also offers fishing, hunting, and other outdoor merchandise not previously offered, including guns, ammo, kayaks, and paddleboards.

“We are hoping with the additional stuff in stock it will bring more people in and we can cater to a larger crowd,” said Raynette Alexander, Commerce Manager.

The new business still has the same management, including their general manager, Mark Gerdich, who had previously left before returning. Customers old and new can expect to receive the same level of quality customer service as they have come to expect, if not more so, Alexander said. 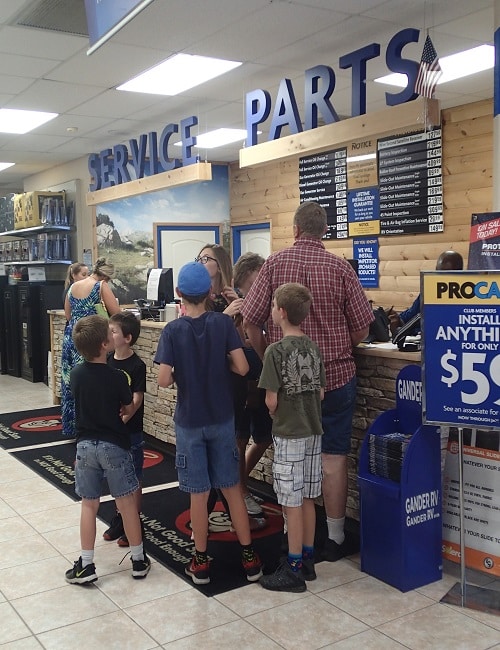 “We do have a lot of old customers. We try to take care of them and their needs and keep them happy,” she said. “Come visit. We’d love for people to come out and see us.”

Many new visitors already took the opportunity during the grand opening to take a gander at what Gander RV had to offer, and they were not disappointed at what they saw. 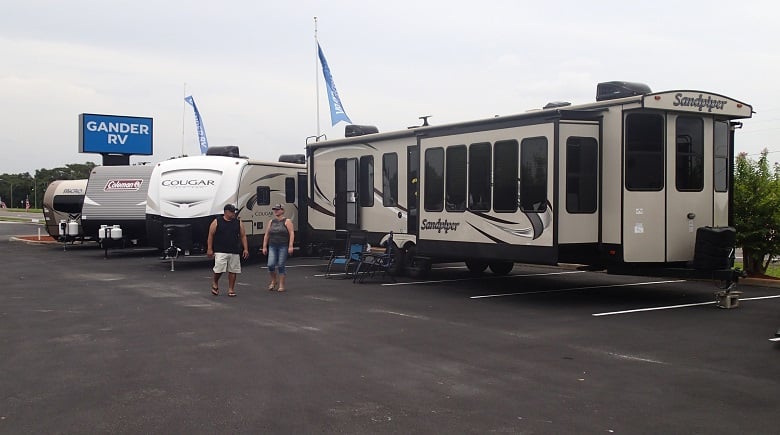 Randy Stucky came out from Winter Haven to take a look at the RVs. He is considering purchasing an RV for himself. His needs are simple enough: two bunk beds for his boys and a separate bed for himself. He loved being able to peruse the shop, and his boys especially had fun with the many activities, including the shooting range.

“It is a really nice shop,” he said. “It has just about anything you would need for fishing, hunting, and camping.” 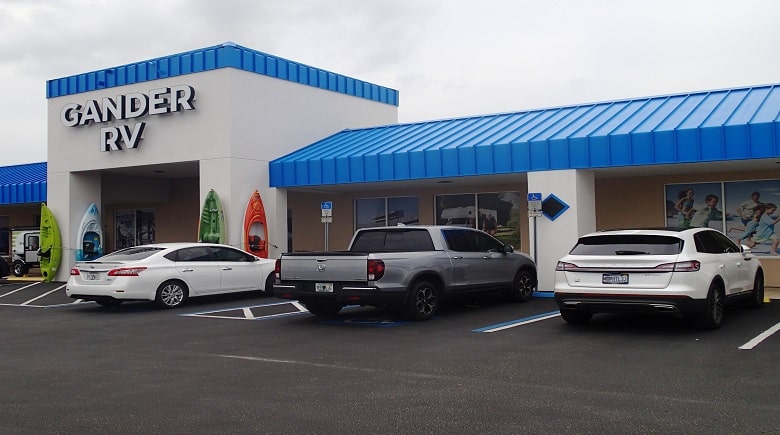