With only ten dollars’ worth of material purchased at the dollar store, Madison Gillis and her sisters, Jillian and Hayden, constructed a tropical-themed boat that won first place at the inaugural Beach Battle at Tanners Lakeside. 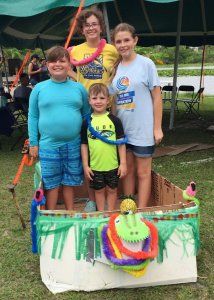 The young girls were one of several teams that flocked to the shores of Lake May in Winter Haven to construct their boats made from used cardboard boxes, duct tape, and other material for the cardboard boat race, one of several races hosted at Tanners Lakeside on Saturday. 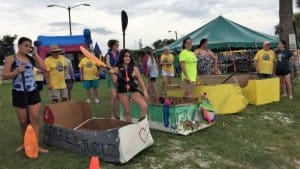 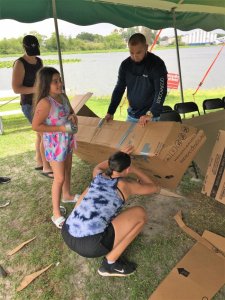 Gillis and her other teammates cast their boat into the waters and paddled it to the buoy several yards into the water before their boat began to take in heavy water. Theirs was the first to reach the goal, yet so much water filled the boat that it had to be dragged back to shore with the help of a paddle boarder.

Their boat taking water aside, Gillis and her team loved being able to not only participate but win one of the races that afternoon for the inaugural event.

“We loved winning,” she said. “I really liked the teamwork we had. It was a load of fun.”

Sheri Hartley, a Rotary on the Ridge member whose organization helped coordinate the event, helped Gillis and the other girls build the boat by providing the supplies. As someone who has been with Rotary for one year, she loves how her organization helps young children better appreciate water through water safety.

The cardboard boat race was one of several races hosted at Tanners Lakeside for their inaugural Beach Battle on Saturday afternoon. Others races included a kayak and paddleboard race around the perimeters of Lake May. 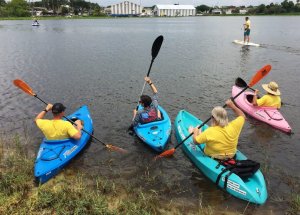 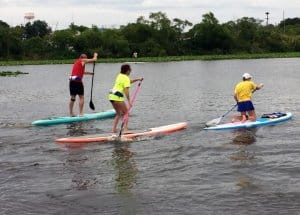 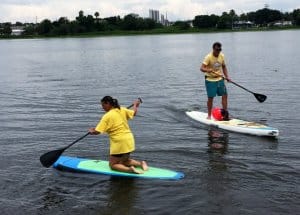 Amber Pierce, the event planner for Tanners Lakeside, has been planning events such as this for the restaurant since being brought on board in January. They had planned Beach Battle with the help of Rotary on the Ridge, who had proposed the idea for the event, she said.

“We were really excited to partner with them on that,” Pierce said. “So because we are on the lake, and we feel it is important for children to know how to swim and to have [an] education about it, we told [Rotary] we were willing to partner with [them]. We suggested the cardboard boat race. It turned out to be a fantastic event, and people loved it.”

The forecast that afternoon was mostly cloudy with showers later in the afternoon. Fortunately, the rain held off for most of the day, allowing the event to host its three main races. However, the overall bad weather may have not allowed for as many participants as they had hoped, Pierce said.

“I think it went over well and I look forward to it next year,” she said. “I loved being able to watch the community come together for something that is fun, that involved the Chain of Lakes, and involves building and education for children and raising money for a good cause.”

Kami Rickert works with both Rotary and Paddleboard Winter Haven, both of which helped coordinate the event that afternoon. Rotary offers water safety classes to local children, while Tanners Lakeside has always wanted to do something with cardboard boats. So being able to host an event like this only made sense for them, she said.

“I think we had a blast,” she said. “The cardboard boats were amazing. I am very psyched about all the people who got involved with us today, as far as carrying on the idea of water safety while we had our races, as well as everybody who got involved.”

Though the skies could have been much sunnier, their event still managed to be hosted as well as it could in spite of increment weather. Overall, this year’s event has raised expectations for next year, and they hope that they can exceed it.

“I think if we had a better forecast, even if we had good weather, we would have been able to draw in more people,” Rickert said. “Hopefully, next year, we will have a sunny day. Hopefully, it will be bigger and better.” 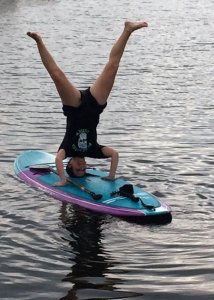