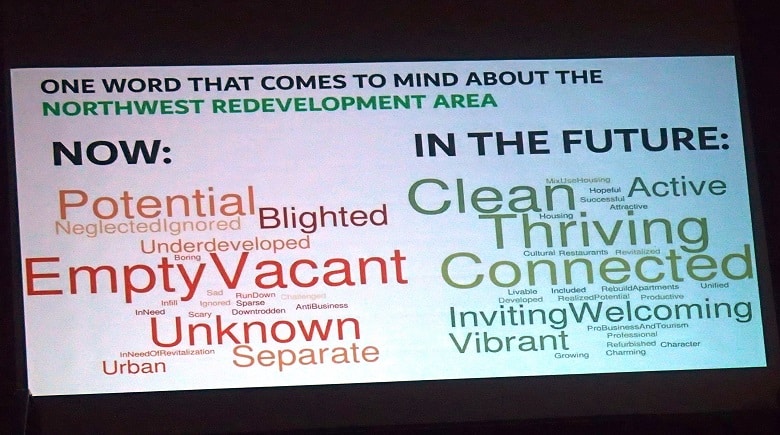 Imagine walking down Lincoln Avenue in Northwest Lake Wales and seeing how a once vacant street had transformed into a more vibrant neighborhood with repaved roads and sidewalks, newly-planted foliage, and remodeled buildings.

Then picture yourself walking along Scenic Highway, either within a linear park along the highway teaming with green landscaping, or along the other side of the highway with wider sidewalks and bike lanes.

Then envision a stroll down Park Avenue and seeing the historic buildings refurbished back to their former glory, all while walking along a repaved road where the sidewalk and main road blend together as one, and where pedestrians and cars share the same road. 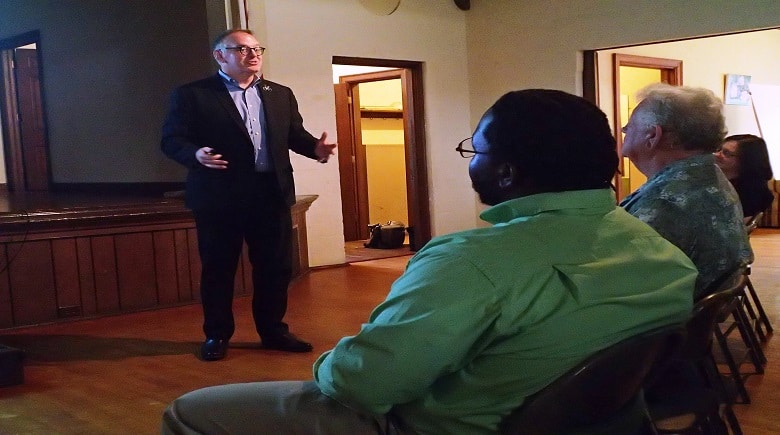 Imagine a newly refurbished Lake Wales where the Downtown and Northwest areas are unified into one single neighborhood where pedestrians roam, cyclists ride, and people can enjoy a diverse array of shops, cafes, and later in the evening, a vibrant nightlife.

If the city accepts a revitalization proposal as created by Lake Wales Main Street, in cooperation with town planning agency Dover, Kohl & Partners, then such a new and improved Lake Wales may very well transition from imagination into reality.

Last Friday evening, nearly 50 local residents congregated within the Lake Wales Women’s Club to see the final draft, or rather “in-progress draft”, of a proposal for a revitalization strategy for Lake Wales, especially the downtown and northwest areas. 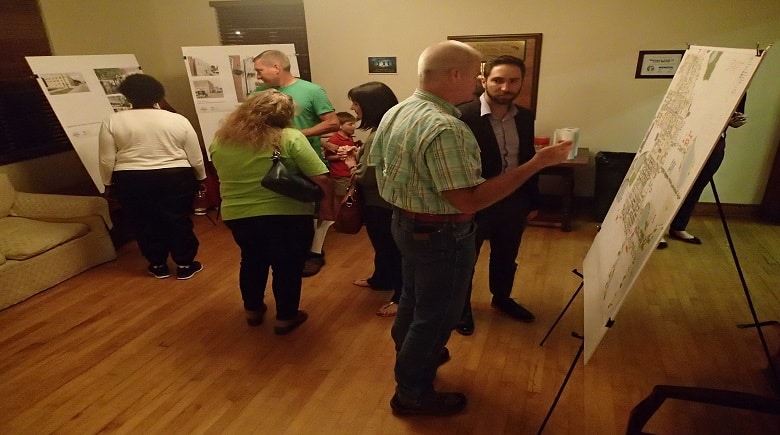 The proposal was created after a weeklong session of collecting data about the local community and receiving feedback from community residents through workshops, walking tours, and research.

The final result was a plan to help make Lake Wales a better place to work, play, and live, with improved pedestrian accessibility, refurbished buildings and streetscapes, and increased housing and business opportunities.

Here are a few of the suggested ideas for the revitalization proposal:

Lincoln Avenue: What currently sits as a vacant area of the northwest section could be transformed into a livelier neighborhood with repaved streets, remodeled storefronts, and more greenspaces with trees that provide more share and foliage that provides a more vivid streetscape.

Park Avenue: During research of the old downtown area, an old photograph of a building along 244 Park Avenue was discovered. The building currently sits as a blank beige wall, contrasting with the historic architecture of the surrounding buildings. With the acquisition of historic grants, the building’s facade could be remodeled and restored to its former glory, allowing it to become a more presentable venue. 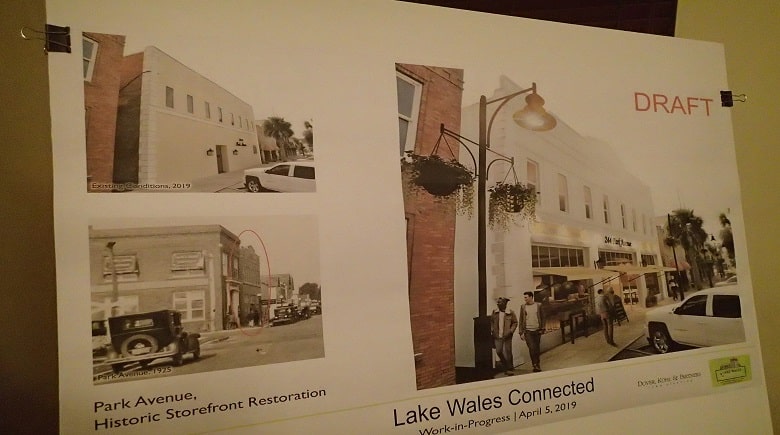 Seminole Hotel: As with the building along Park Avenue, the Seminole Hotel along First Street appears to be a shell of its former self. Through revitalization efforts, also potentially financed by historic grants, the building could be restored as to also make it a more presentable venue.

Grace Manor: In an effort to provide and diversify more housing opportunities, the Grace Manor area would be remodeled to extend the street grid with the addition of more sidewalks, greenways, and a diverse selection of courtyard apartment buildings, traditional houses, and small cottages.

Scenic Highway: To help curb traffic and make the downtown area more accessible to pedestrians and cyclists, a proposed roundabout would be constructed at the intersection of Scenic Highway and Crystal Avenue near the library. This would help to slow down traffic within the downtown area, and thus make it a better place to drive, walk, and bike.

Park Avenue And Scenic Highway: Both roads would be remodeled to tighten the roadway and widen the sidewalks, with the addition of bike paths, foliage, and parking spaces. This would make the areas more accessible by slowing down traffic and providing more opportunities for pedestrians and cyclists. 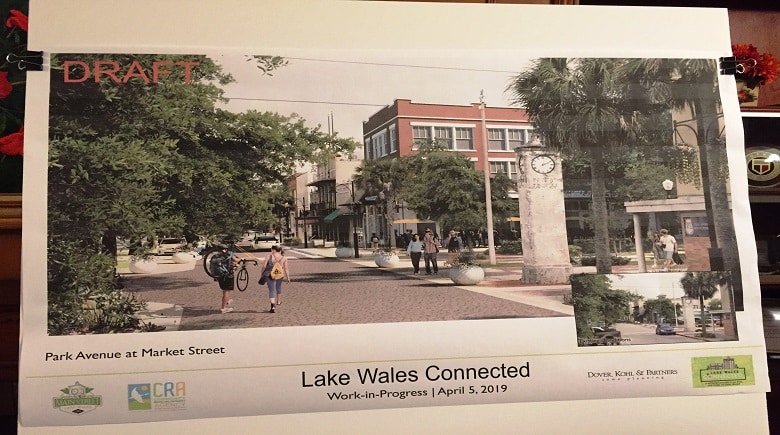 These were but a few of the proposed ideas to help make downtown and northwest Lake Wales a better place to live, work, and play as presented through a town design strategy by Lake Wales Main Street, in cooperation with Dover, Kohl & Partners.

Most of the proposals were inspired by suggestions made by local residents during a community workshop hosted earlier on Monday. During that meeting, data was collected through polls, surveys, and a mapping session where people could mark areas that needed the most improvement.

Further data was collected at the temporary design studio set up along Park Avenue, where residents could drop by and share their own ideas and suggestions about how their hometown could be improved. More research was conducted during a walking tour that week with select community leaders, who shared their hometown’s history and needs. 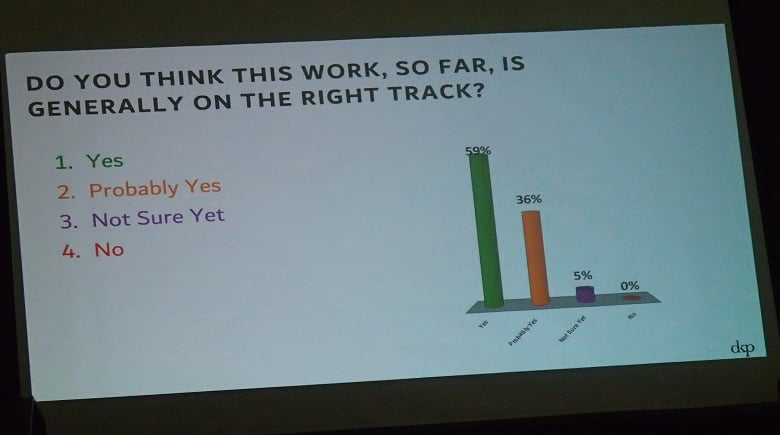 All of the data was collected and analyzed during the week to help prepare the “in-progress” draft of the town design strategy. Rather than being a final draft, the proposal would be subject to further revisions based upon the suggestions of local residents and officials.

This proposal will serve as a guide for Lake Wales officials as to better direct them towards adopting policies and projects that could help revitalized the city over a period of time, helping to gradually transform it into a better place.

Later that evening, attendees could take a closer look at the proposal with an exhibit of the various design plans and maps. Following the presentation, a survey was hosted to discern their ultimate thoughts on the proposal. The results showed overwhelming support from the attendees.

“What we have is a work in progress, not a final product,” explained Victor Dover, principal-in-charge for Dover, Kohl & Partners. “We feel that what you all call upon yourselves is to resume work on the great place that already started…to build upon that fine history. Here, when people drew lines on a map…the folks who did that…were the best in the world who did that, and they laid a fine foundation for you, and you have to take the pencil and finish the work that they started for you.”

Karen Thompson, President of Lake Wales Main Street, mentioned how the entire week was a cathartic experience, a real “communication blitz” where community residents, business owners, and leaders all came together to develop a single vision for their city.

“Much work is ahead, and it will take leaders like yourself who are willing to invest in the northwest,” she said. “You are giving us the tool in which to design neighborhoods, downtown, and connect everything in-between. You are giving us the map to rise to the level of expectations that we all know exist, we just need your direction and magic touch.”

For more information about Lake Wales Main Street, visit their website at: http://lwmainstreet.com/