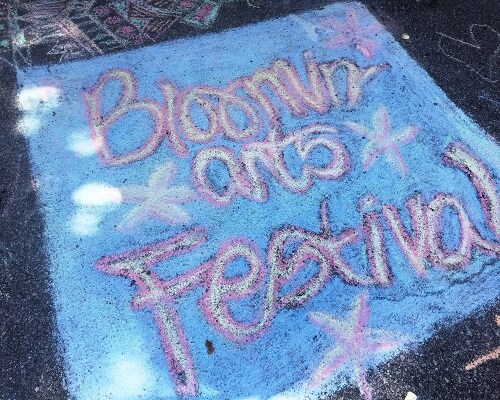 As an Alabama native, Kelly Gardner is used to seeing foxes, owls, cows, and other such critters roaming about the landscape of her country home. So it only makes sense that these animals would be chosen as the subjects of her “fine folk art.” 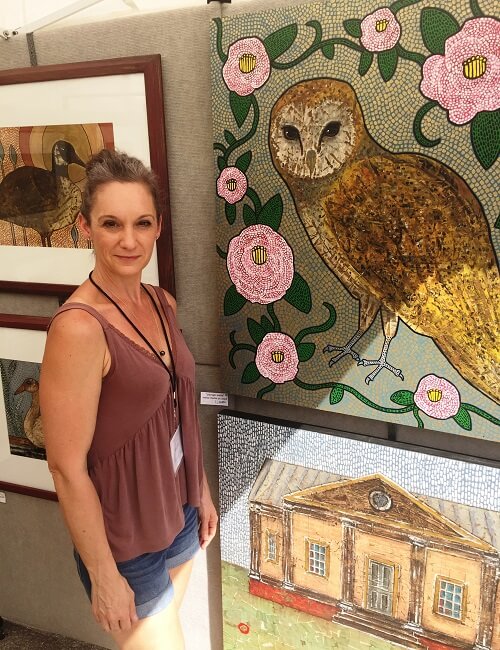 “My subject is anything that I love, especially from around the area I am from,” she said.

Gazing upon her artwork, one witnesses the overall simplistic design, but upon closer inspection, notices attention to detail brought about by layering and processing each individual art piece.

Having studied graphic design, and having gained experience working four years in art shows and six years in art galleries, has allowed Gardner to cultivate a unique art style that she has dubbed, “fine folk art.

“I have been in art since elementary school, that is when I fell in love with it,” she said. “I love the process of creating something from nothing.”

Artwork so simple yet equally complex and detailed make her art quite unique from various diverse art pieces on display. Such uniqueness allowed her art. to be named “best of show” at this year’s annual Bloomin Art Festival in Bartow. 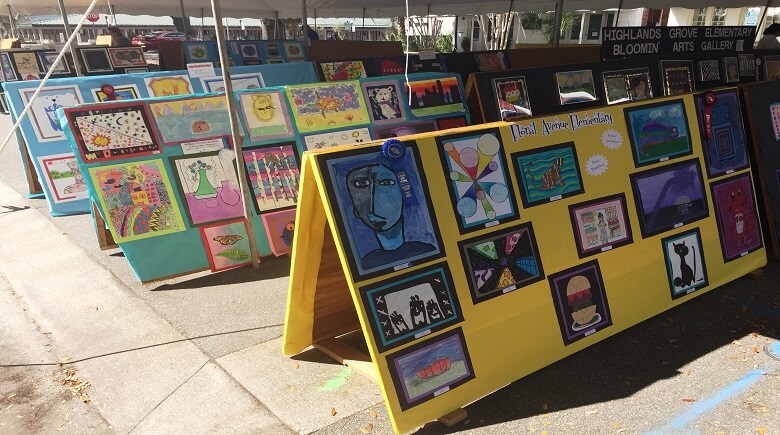 Gardner first attended the art show four years ago. As someone who participates in various art shows across the state, she decided to come back to this one, not only to branch out her outreach, but also return to what she considered to be a picturesque venue.

“I was absolutley thrilled and honored,” she commented about winning first place. As to what she owes her success to winning first place this year, she noted that “it is all hard work and dedication never giving up…honing in on my skill and continuing to grow.”

The Bloomin Art Festival has been hosted in Bartow for the past 48 years. This year’s event showcases more than 100 booths along Main Street and the adjoining streets, displaying a diverse array of artwork from watercolors and ceramics to pottery and wood.

This year drew in their biggest attendance. So many qualifying artists signed up for the event that the art show grew by one block, with one whole city block filled with old and new artists, explained Mitchell Githens, event co-chair.

For the past two days, the art show entertained guests and artists alike with various activities that weekend, including a car and jeep show, a quilt show within the Historical Center, and free entertainment and hands-on activities for the children, which also included a school art showcase with art from students from local schools.

“It has more than met our expectations,” Githens said. “Particularly this year it grew an additional block, we had enough artists quality applying that we added an entire block to the show.”

The Bloomin Art Festival had several ribbons conferred to its artists, judging them in various divisions. First place went to Kelly Gardner for her “fine folk art.”

Colleen Williams, an artist from Chattanooga, Tenn., won second place for her porcelain art pieces. She had initially started playing with clay as an apprenticing architect, but later decided to utilize porcelain as it is lighter and easier to create artwork with, she said. 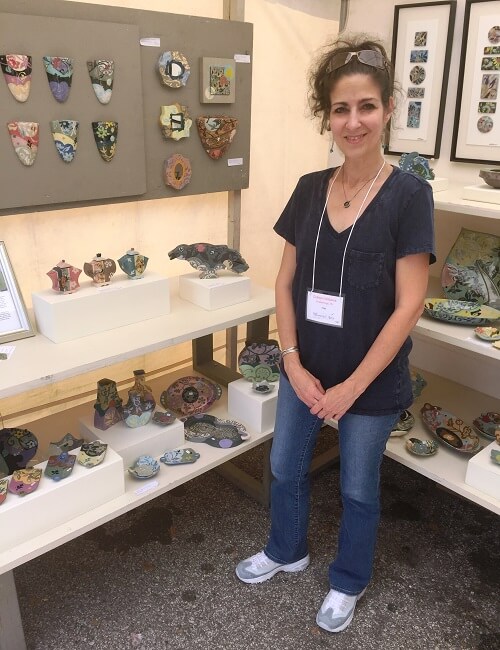 Most of the colors and patterns that she uses within her artwork are inspired by the tribal patterns from cultures around the world, from beautiful kimonos from Japan to the saris from India, she said.

With her brother moving to Mount Dora, she decided to scope out cities within a two-hour radius where she could visit and participate within local art shows while using her brother’s house as a base of operations.

With this being her first time at the event, she was more than surprised to have won second place, let alone win anything at all.

“Being able to win was fantastic,” she said. “That was totally unexpected and a big honor. The work is very different. It is unique, and I connected with the judge…showing her what the process what. She knew that the medium was difficult to work with. I think that was very helpful.”

Michael Weber, from Fort St. Lucie, Fl., won third place for his original watercolors. Having graduated from the Ringling School of the Arts in 1967, he has received more than 46 years of experience as a full-time artist, all of which show within his watercolors. 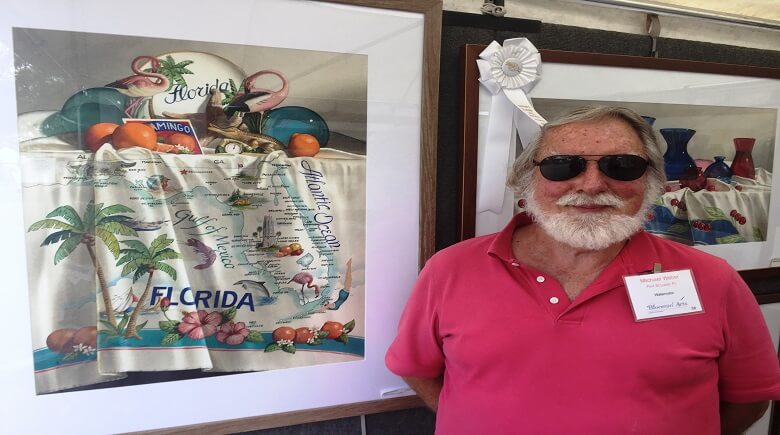 As a Florida native, many of his subjects are Florida-centric, from orange memorabilia to a toy circus train from Ringling Brothers.

“We live here, so we collect a lot of Florida memorabilia,” he said. “So it is getting so expensive, to get it to work, that I would put it [all] in the painting.”

Weber initially visited Bloomin Art Festival nearly 30 years. He decided to return again this year, and winning third place was more than enough reward for him having done so, he said.

“This is the first time I have been back,” he said. “Wanted to give it a try, it is a nice area, and we have had success here in the past.” 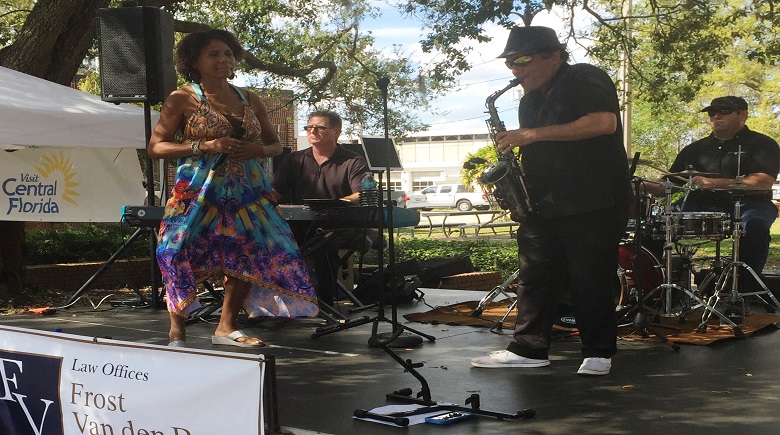 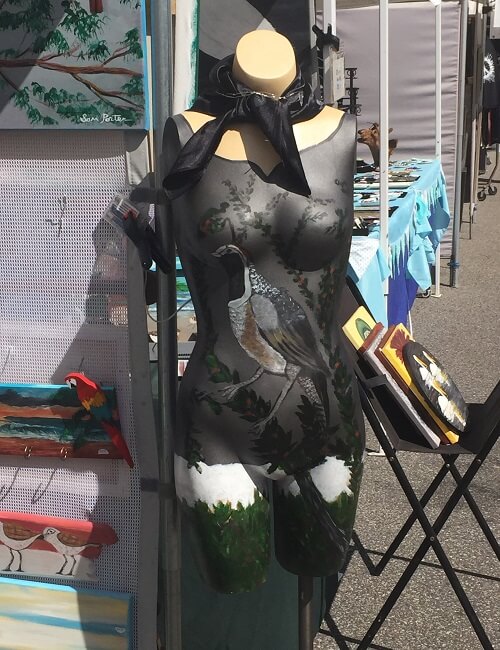 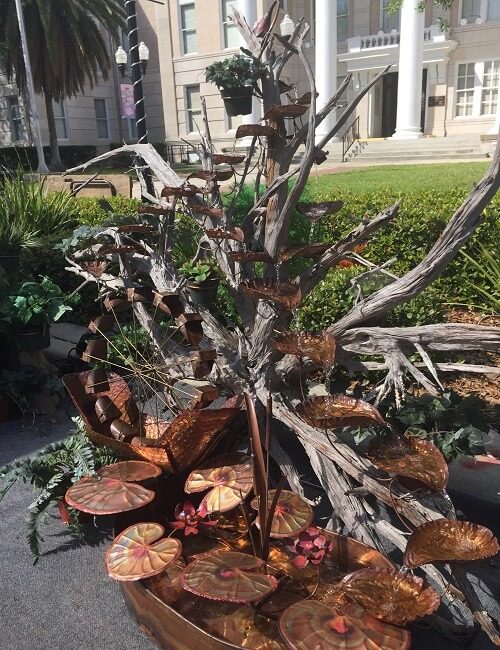