One Billion Rising Dances To “Break The Chain” Of Domestic Violence 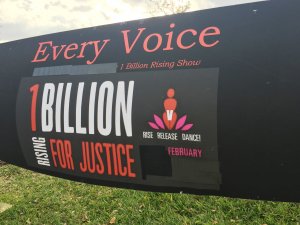 Statistically, more than ten million people, mostly women, are victims of domestic violence per year. More than six million children are victims of child abuse. Even then, most cases of violence and abuse go unreported.

Bernie Warren, a retired local school counselor, knows all too well the abuse that local families face. During her career, it was her job to notice and report signs of potential child abuse in students

She knows that many victims are afraid to speak out, that many of them suffer in silence. She and many others within the Winter Haven community know this, and they will remain silent about it no more.

For the past six years, she and many others have organized One Billion Rising, a local event part of a greater global movement to raise awareness for domestic violence. This is all done in an effort to break the silence that victims face, and in turn, “break the chain” of violence responsible for their suffering, she said. 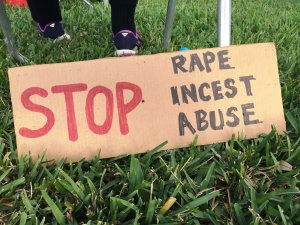 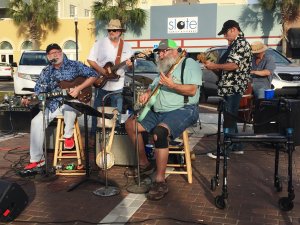 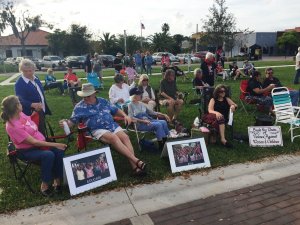 This year’s event drew in more than three dozen people from the local community to gather in South Central Park in Downtown Winter Haven to participate within a flash mob-style dance to raise awareness for domestic violence.

The dance was led by elementary students within the dance program at Bethune Academy from Haines City, who were led by their dance teacher and instructor, Janet Gomez. Providing the music for the dance were the “I Am Woman” by Helen Reddy and “Break The Chain”, an original song by One Billion Rising. 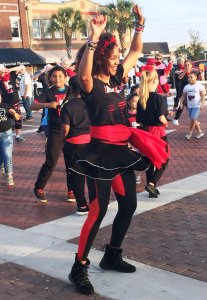 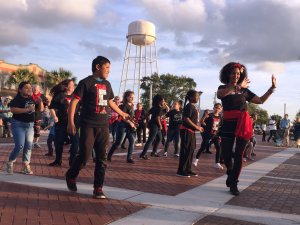 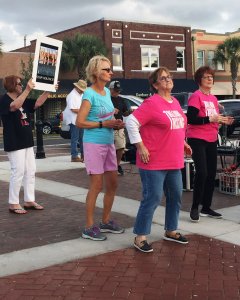 Prior to the main event, attendees could enjoy live music as performed by the local band, Frank and the Plank Spankers, as well as enjoy food from local vendors and receive information about abuse and violence from local organizations such as the Polk County Sheriff’s Office and Peace River Center.

The event that evening helped conclude several events that week hosted in conjunction with One Billion Rising, including an art exhibition and show at the Winter Haven Campus of Polk State College.

Having participated in such events for the past six years, Warren has witnessed how they not only raise awareness for people who many not have been aware about such abuse occurring in their local community, but also reach out to victims of said abuse.

Warren and her husband, Chuck, helped start the local event six years ago through their local organization, the Sage-ing Program, part of the Sage-ing International, which, according to its website, seeks to allow the older generation to impart their wisdom and experience to the younger generation as to help inspire them to make great transformations in the world.

Chuck first learned about One Billion Rising when it started nearly seven years ago. He felt that its message and mission was one that was sorely needed in their local community, so he and his organization helped to bring it here and has sponsored it ever since then, he said.

“We felt passionate about this cause,” he said. “There are so many people here that it means something to them. There are people here who have been through abusive situations, and they come here and it provides them with some relief and [as] a way for them to express themselves.”

While domestic violence affects mostly women, the violence itself is mostly created by men. As such, the issue is as much a men’s issue as it is a women’s issue, which is why men such as himself need to step up to address it, he said.

“It is really more a men’s issue than a women’s issue because a lot of violence towards women is caused by men,” he said. “So if we are going to stop it, we really need to have the men to speak out about it. We need men telling other men to stop with abusive attitudes and words towards women.”

Janet Gomez, dance teacher from Bethune Academy, has been participating in the event with her students for the past four years. Twice a week, her students practice their routine after school in preparation for their big performance.

Even at a young age, many children are aware about domestic violence and abuse, as many of them come from households that experience it, she said. As such, she wants her students to help raise awareness in others about similar situations so they can be more open about it.

“I felt the need to make sure that everyone is aware that domestic violence is something that should be kept a secret,” she said. “Everybody should know about it…I felt that it needed to be addressed. That is why I like this event, because it touches everybody with a dance.”

Since she began participating, Gomez has seen this local event grow in numbers, and she hopes that it will only continue to grow and further spread awareness.

“This year was wonderful,” she said. “We had a lot of things that attracted people. So I think this event attracts more and more people every year, and they are aware of these things happening, and they want to be present.”

For more information about One Billion Rising Polk County, visit their Facebook page at: https://www.facebook.com/whonebillionrising/ 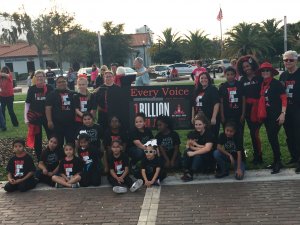 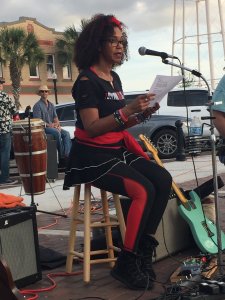 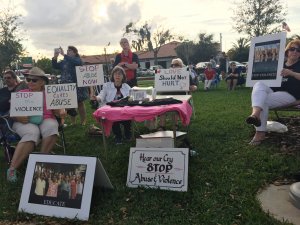