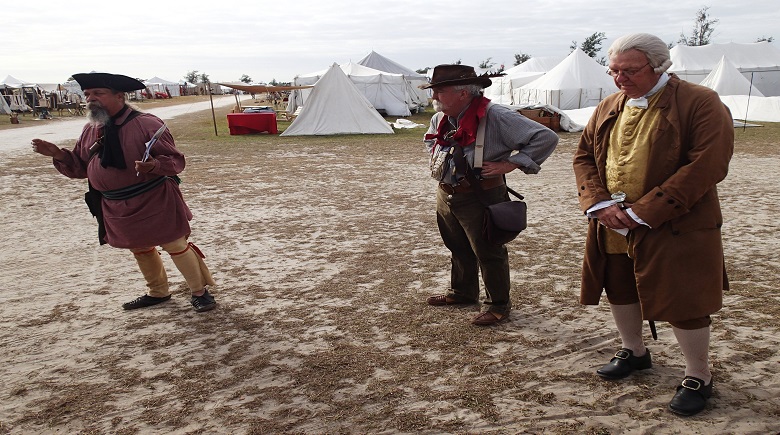 Nestled near the Alafia River within the Florida wilderness stands an encampment of several white canvased tents.

Within the heart of this camp, several people dressed in rustic country clothing peruse a makeshift marketplace where traders showcase their wares of furs, silverware, pottery, and other merchandise, all displayed upon rugs and tables. 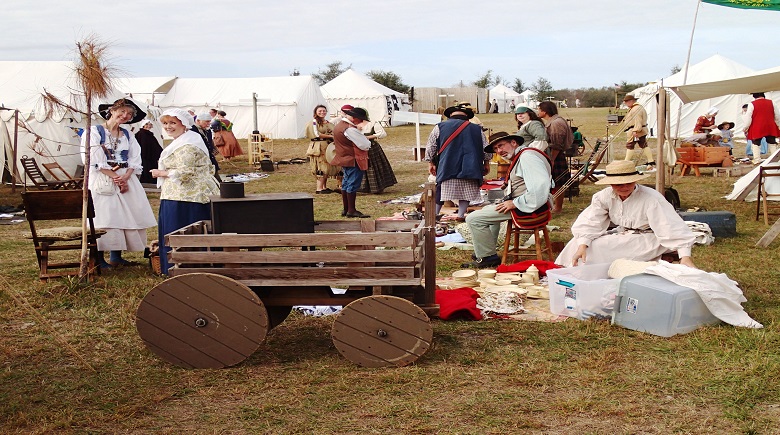 One bonnet-wearing mother watches over her toddler son as he reaches for a wooden flute and begins to blow cacophonic tunes from it. Obviously, he has spotted a new plaything that she will be obliged to buy for him and deal with throughout the day. 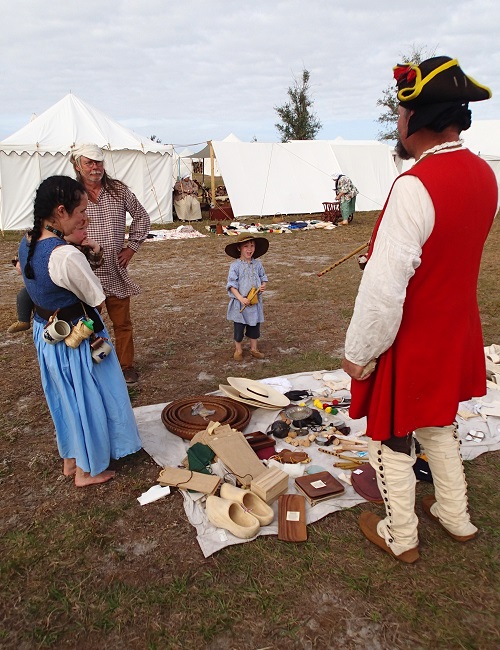 Around the corner, a baker pushes a wooden tray of freshly-kneaded dough within a clay oven to cook into hot and piping loaves of bread. Across from his tent, a blacksmith tinkers away at a new fish hook, his hammer striking the hot iron against his anvil.

This may all sound like a scene from Florida more than 200 years ago, but in reality, this all happened merely days ago during the 48th Annual Alafia River Rendezvous in Fort Meade.

For nearly half a century, the Alafia River Rendezvous has been drawing in hundreds of historical demonstrators from across the country and even the world to the Central Florida wilderness to help re-enact daily life within the state pre-1840.

Justin Cherry, a baker for the Half Crown Bakehouse, traveled from Charleston, S.C. to attend the rendezvous in Florida for the very first time. He and his team specialize in baking “period-accurate” bread and baked goods within ovens made from clay, mud, and straw.

The oven he uses, which was modeled after a similar oven from the 1730s, can fit 18 to 20 loafs at a time. Each loaf is prepared with simple ingredients that would have been used during that time period, thus ensuring that they are historically authentic. 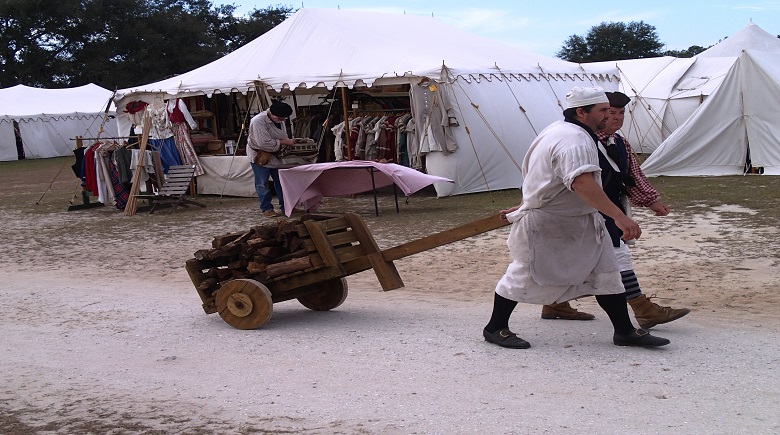 He has been baking for the past six years, and cooking professionally for 12 years. Aside from making this bread, he enjoys the process of researching the grains and finding out what kind of breads would have been made more than two centuries ago.

“When you start to make them, you’re really getting back to real bread,” he said. “No sugar. No starches. Just good old fashioned salt, water, yeast, and flour.”

Glenn McLean, a broom maker from Wonky Wood Works in Lake Wales, has been attending the rendezvous for the past 20 years, creating old-fashioned wooden brooms using tassels from the serpent plant, which is related to the sugar cane. 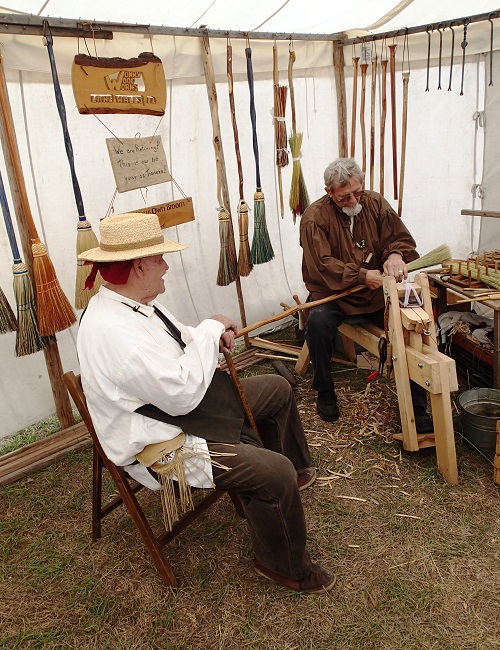 Brooms were important during the pioneer days, as everything was made from wood and thus produced plenty of dust upon the floor, he said. Pioneers would also sweep their front yards as a way to keep it tidy and keep away any potential pests.

These brooms were also sacred for Wiccans, who used them to “sweep away” evil spirits—a practice that led to the superstition that witches fly on brooms. As far as broom flying is concerned, McLean’s brooms have especially proven popular with little children thanks to the popularity of the Harry Potter series.

“Prior to Harry Potter, they could care less about a broom,” he said. “They still don’t know they’re for keeping your room clean.”

McLean has been attending the event for nearly two decades, with this year being his last for broom making. He wants to experiment with other crafts, as well as enjoy the event without being tied down to making brooms all day, he said.

“It is kind of hard on the hands, and after 20 years of it, it was a hobby that got out of hand, and instead of rendezvousing and having fun, I am in here making brooms,” he said. “I like making brooms, but you kind of miss out on some of the other things happening here.”

The Alafia River Rendezvous has been hosted since 1971, and had since been taken over by the Florida Frontiersman, a 501c3 non-profit organization dedicated to preserving the skills and crafts of pre-1840 Florida. 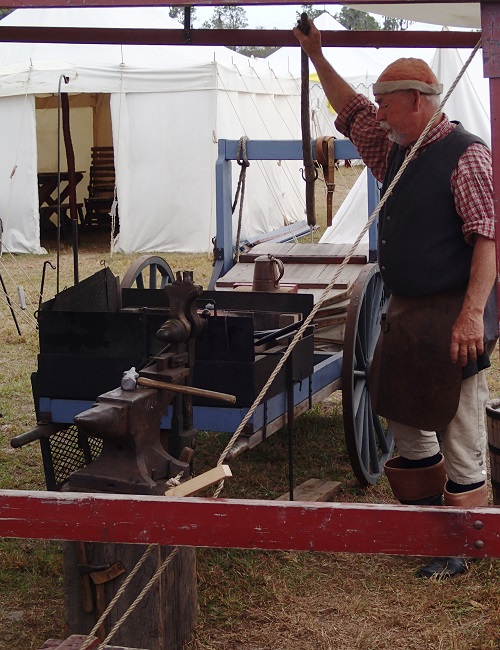 More than 1,000 people from across the country and even the world arrive to this event annually to spend an entire week utilizing their skills to re-enact history, with as many as 1,400 people attending, explained Ron Clark, Florida Frontiersman President.

Clark has been with the event since his organization took it over in 1985. He appreciates being able to mingle with fellow historical re-enactors and demonstrators and sharing their passionate love for history.

“What I like is meeting people, seeing the things that you don’t normally see in Florida that you would have to go to other reenactments to find trade goods, and overall being together,” he said. 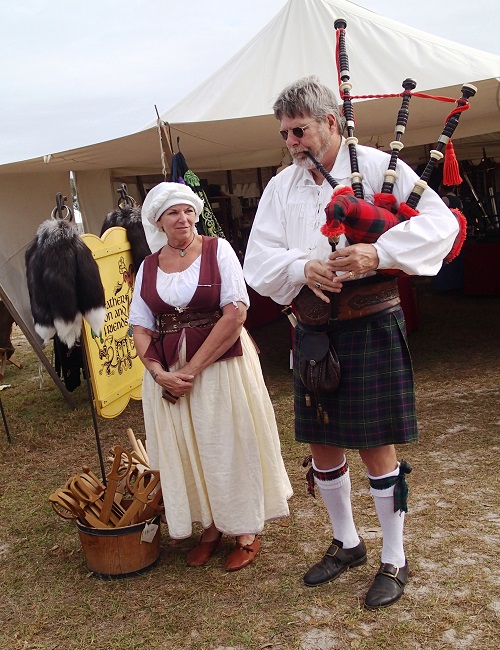 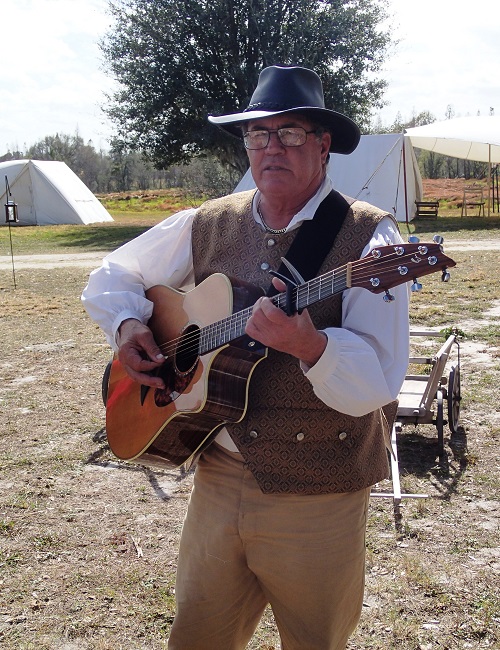 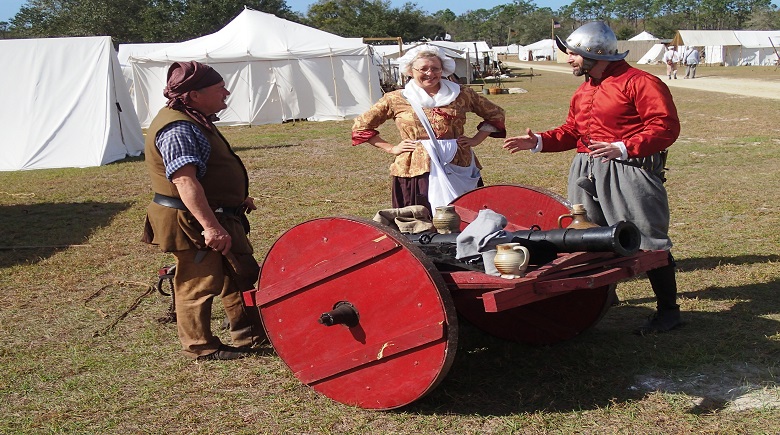 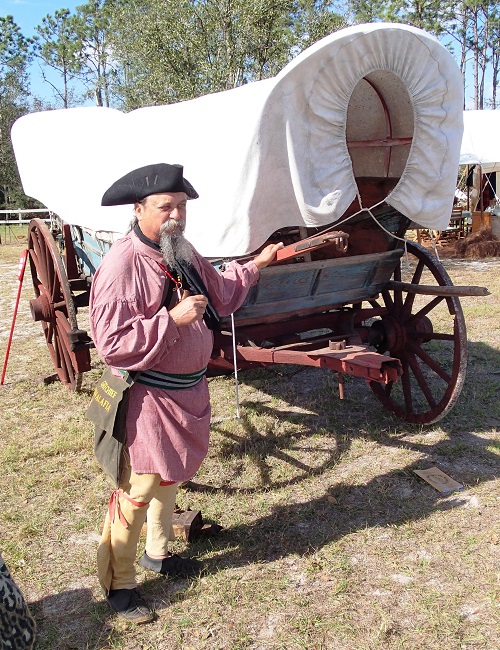