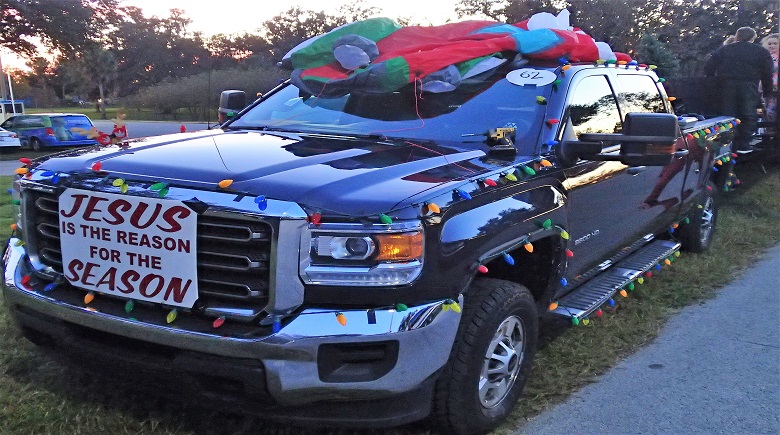 We all have our favorite Christmas stories. For some, it’s “Twas The Night Before Christmas.” For others, it’s “Rudolph The Red-Nosed Reindeer.” And for many, it’s the original Christmas story of the Nativity.

Many of these stories and more were showcased through more than 100 floats in this year’s Lakeland Christmas Parade on Thursday evening with this year’s theme of “A Storybook Christmas.”

From traditional Christmas stories such as Frosty the Snowman and Rudolph The Red-Nosed Reindeer, to other classic children’s stories such as The Jungle Book and Madeline, 115 floats each told a different story based off of a classic or modern storybook. 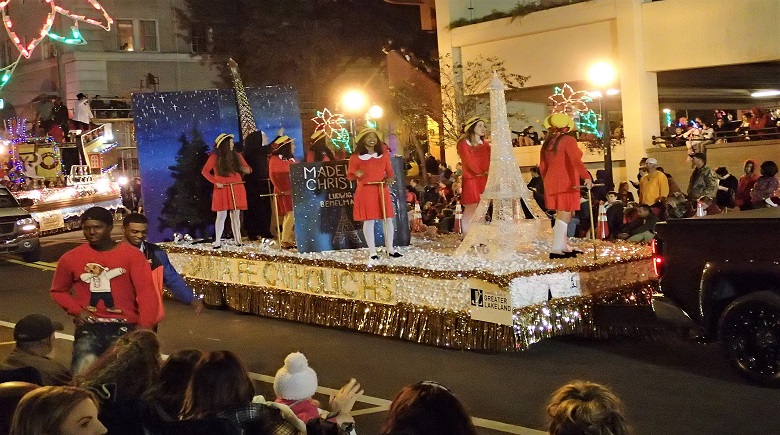 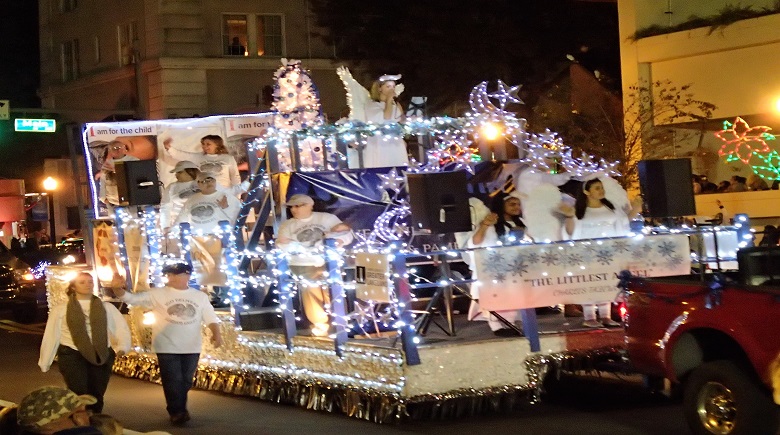 Medulla Baptist Church decided to stick with the original Christmas story this year with an elaborate Nativity scene cast aglow with hundreds of sparkling electric lights. 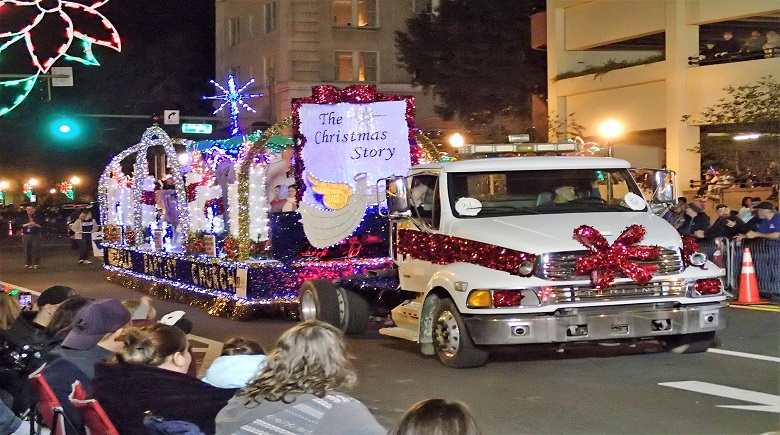 Planning and preparation for their church’s float begins early in the summer and continues on until the night of the parade, explained Karen Fair, a member of the church in charge of the float.

For the past eight years, the church has consistently won awards as presented by the parade’s judges. Last year they won the “Judge’s Choice” award.

Their success thus far has been solely attributed to the grace of God, as it is their goal through their participation within the parade to honor His glory, Fair said.

“We owe it all to the Lord,” she said. “Our goal is to witness for the Lord and to tell everyone what Christmas is really about.”

McKeel Academy Central has been participating in the award each and every year, yet has not really won any awards for their floats.

This year, they decided to base their float off of “A Charlie Brown Christmas”, making it one of many others with a similar theme. Even though their float may not be original, and even though they never really win any awards, their school enjoys participating within the parade nonetheless, and they feel that their float feels apropos of the entire situation. “We liked how he [Charlie Brown] learns the true meaning of Christmas from his friends, they all came together to help teach him a lesson and feel good about Christmas again,” said Megan Meisner, a volunteer from the school. “We love having fun with the fellow students and the staff from the school.”

This marked the 38th year for the parade, which featured 115 floats and vehicles, and drew in an estimated 30,000 community members to Downtown Lakeland, said Callie Miller, President of Junior League of Greater Lakeland, the organization which hosts the parade. 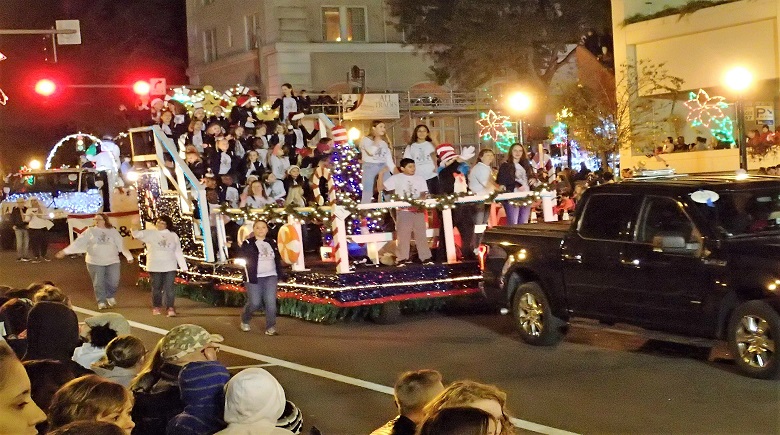 The theme this year of “A Storybook Christmas” was inspired by her organization’s love for “inspiring the imaginations of children”, especially through storybooks. When the theme was proposed earlier this spring, the city loved it, Miller said.

Also keeping with this year’s theme, aside from allowing the floats to be decorated after storybooks, more than 5,000 copies of “The Biggest Tree Ever” were distributed during the parade by the Junior Leauge from their float, which was themed to the book itself, Miller said.

This year’s Grand Marshal was local student Laney Kirkpatrick, who was selected from hundreds of other elementary school students through an essay contest for her own essay, “Just Be You!” 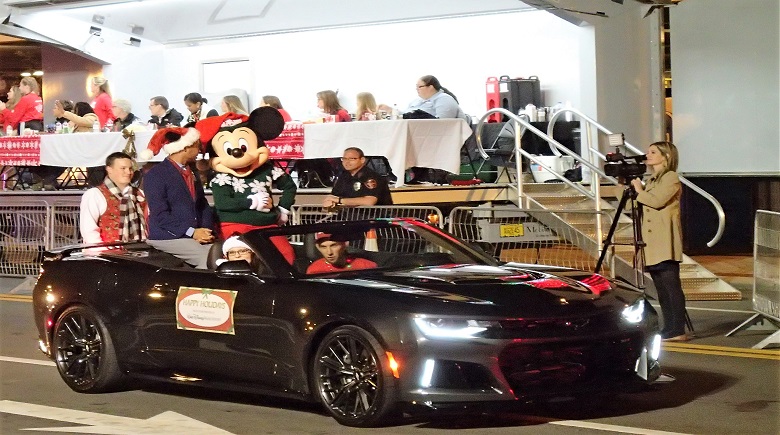 Having been hosted for nearly four decades, the parade continues to remain a Lakeland tradition due to the hard work of the many people who help make it happen, especially the dedicated city employees.

“None of this would be possible without the Parks & Recreation team, the police officers, fire department, and the hundreds of others from the City of Lakeland who make this evening possible,” she said. “Our community has embraced the parade,” she continued. “It’s a wonderful occasion for the Community to unite with one another as we welcome the holidays and Santa and Ms. Claus to Lakeland.”

This year’s award winners will be announced at the next city commission meeting on December 17 at 3 p.m. at Lakeland City Hall, located at 228 S. Massachusetts Ave, Lakeland, Florida 33801. Meetings can be watched on-line at: bit.ly/LakelandGovLive. 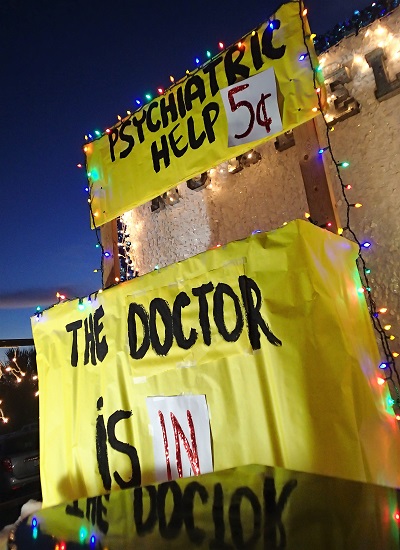