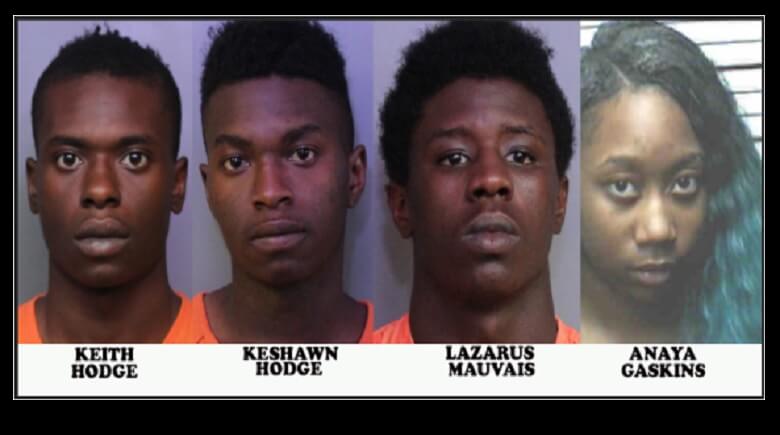 On Tuesday, May 8, 2018, at about 2:49 a.m., deputies from the Polk County Sheriff’s Office responded to a call in the Davenport area regarding suspicious people in a neighborhood, which ultimately resulted in the arrest of three adult men and a female juvenile for numerous car burglaries.

On Tuesday morning, a resident of the Loma Del Sol neighborhood saw the group approaching several parked vehicles, before leaving in a dark colored pickup truck.

Deputies immediately responded, and attempted to make contact with the occupants of a truck in the neighborhood that matched the description. The four people within the truck jumped out and fled in different directions. It was discovered that the truck had been reported as stolen out of Orlando.

Two were caught trying to conceal themselves in a retention pond. The other two were stopped as they were walking through the neighborhood. A fifth unknown suspect is believed to have been involved.

During the investigation, detectives were able to connect the four suspects to more than a dozen car burglaries in the area, which also includes the Loma Vista, West Haven, and Four Corners neighborhoods.

“All four of these suspects have been in trouble before, and yet here they are again, out committing even more crimes. Our detectives are working with other law enforcement agencies in the Orlando area to see if they are connected with any recent burglaries there as well. We commend the residents in the area who saw something and said something – without that, we would not have caught these suspects so quickly” – Grady Judd, Sheriff

Mauvais and the Hodge brothers were additionally charged with Contributing to the Delinquency of a Minor (Gaskins).

Anaya Gaskins was listed as a missing juvenile at the time of her arrest, and was already on juvenile probation for battery on a law enforcement officer and robbery by sudden snatching. She was also charged with violating her probation. Her criminal history consists of four felonies (robbery, battery on a leo/three counts) and five misdemeanors (petit theft, resisting/two counts, and disorderly conduct/two counts).

Keshawn Hodge is currently on juvenile probation for Dealing in Stolen Property (felony), his only prior offense.

Lazarus Mauvais has a prior Burglary of Conveyance charge (felony).