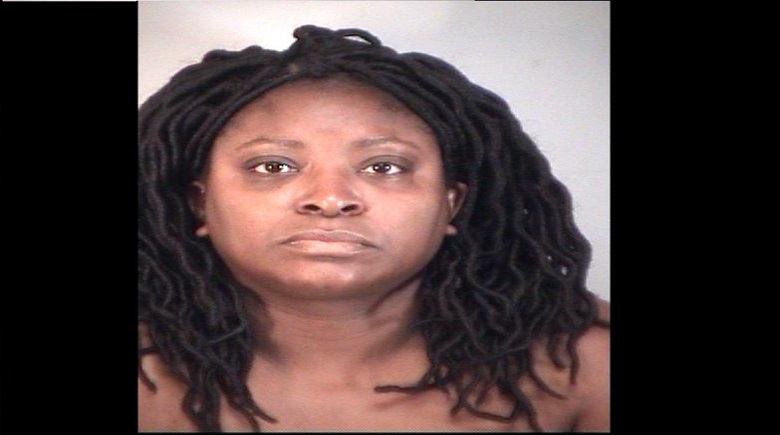 On Sunday, September 17, 2017, Polk County Sheriff’s Fraud detectives obtained a warrant for 46-year-old Cornesa Mobley of Clermont, charging her with:

She was arrested for the Polk County warrant on Monday, September 18, 2017, in Clermont, and booked into the Lake County Jail.

According to the affidavit, Mobley filled out a rental applications at IPG Realty in Polk County, to rent a Clermont home. IPG Realty conducted a background check with the information provided on the application (her SSN, DL number, and DOB), and found Mobley had poor credit, and a previous criminal arrest for check fraud. When confronted about the arrest, Mobley told IPG Realty that the previous arrest was an error, and provided them with a letter from the State Attorney’s Office 10th Judicial Circuit, bearing State Attorney Brian Haas’ name and a seal, claiming to exonerate her of the felony fraud charges.

During the PCSO investigation, detectives consulted with the SAO, who confirmed the letter she provided was fake.

Her criminal history includes 11 prior felonies, including grand theft, scheme to defraud, and fraudulent checks.

An excerpt from the affidavit is below, and is self-explanatory:

On 6/12/17, the suspect Cornesa Mobley, aka, Cornesa Gilliard, met with Stacey Ellison of IPG Realty in order to rent a home located at 17529 Placidity Avenue, Clermont, FL, 34714, located in Lake County. The meeting took place at the IPG Realty office located at 9550 West US Hwy 192, Clermont, FL 34714, located in Polk County. The suspect advised she wanted to rent the home and submitted a rental application.

On or about 6/16/17, Cornesa Mobley uttered three (3) checks to IPG Realty via Stacey Ellison. These checks are all fraudulent and contain a variety of fraudulent items. The checks were issued from Veterans Coalition of Florida, an organization that does not exist. The address associated with this false organization also does not exist. The routing number on these checks match the financial institution but the account number does not exist and has never existed. The name that signed the checks, “Paul (illegible last name)” is a false name as well, this is known because the organization does not exist. The total amount for the three (3) checks were $4500.00. The suspect forged these three (3) checks with the intent to defraud IPG Realty and by placing the fictitious organization of “Veterans Coalition of Florida” and the fictitious name “Paul” on the signature line. The suspect possessed and uttered these three (3) checks, which are deemed forged, published as true, knowing the same to be false and with the intent to defraud IPG Realty. The suspect possessed a counterfeit payment instrument and uttered them with the intent to defraud IPG Realty.

On or about 6/16/17, Cornesa Mobley, while discussing the rental application and concerns located on her background check, uttered a letter to Stacey Ellison thatappeared to be from the State Attorney’s Office which exonerated her from her previous felony charges. The top of the letter bears the Great Seal of Florida and has the text “Office of the State Attorney 10th Judicial Circuit State Attorney Brian Haas.” This letter is also ended with “Sincerely Randi DeGarcia.”

ASA Brad Copley analyzed this letter on 8/15/17 and determined that it was a fraudulent letter and that there is no Randi DeGarcia that works at the State Attorney’s Office. Additionally, the State Attorney’s Office utilizes their own seal and their letters do not appear in the format the suspect presented it in. Stacey Ellison believed the letter to be true and factual when the suspect uttered it.

On or about 7/12/17, the three (3) checks described above came back as not valid because the account was unable to be located.

On 7/17/17, three (3) additional checks were dropped off to IPG Realty by the suspect’s sister Kenya Mobley. These checks totaled $4500.00. These checks were also fraudulent and bared the same issues as listed in the first three (3) checks uttered. In addition to those issues, two false signatures were provided on each check uttered this time, this is known because the organization does not exist. The suspect forged these three (3) checks with the intent to defraud IPG Realty and by placing the fictitious organization of “Veterans Coalition of Florida” and “Sharon Middleton” and “Todd Harris” on the signature lines. The suspect possessed and uttered these three (3) checks, which are deemed forged, published as true, knowing the same to be false and with the intent to defraud IPG Realty. The suspect possessed a counterfeit payment instrument and uttered them with the intent to defraud IPG Realty.

On 7/19/17, the suspect possessed and uttered an additional check to IPG Realty via Stacey Ellison for the amount of $750.00 at 9550 West Us Hwy 192, Clermont, FL 34714. This check was also fraudulent and had an institution name that did not match the routing number. This check was a personal check and bared the same account number for the personal account as the above checks did that were supposed to be from Veterans Coalition of Florida. This check was in the name of “Chef Cornesa Mobley”. The suspect possessed a counterfeit payment instrument and uttered them with the intent to defraud IPG Realty.

The suspect committed the act of grand theft by depriving IPG Realty of funds amounting to $5250.00. This is a sum total of the checks submitted by the suspect Cornesa Mobley.

The suspect engaged in a scheme to defraud and obtained property with a value of less than $20,000, namely the use of the property located at 17529 Placidity Avenue, Clermont, FL 34714.