The Cypress Gardens Water Skiing Tradition Is Being Kept Alive

The Cypress Gardens Water Skiing Tradition Is Being Kept Alive 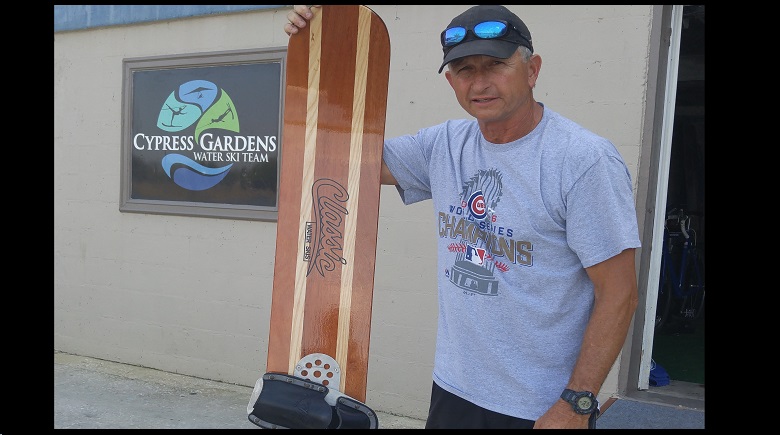 WINTER HAVEN – Cypress Gardens was the center of the world of waterskiing for decades. But when it closed in 2009 after a 66-year run, it left a void in the community.

But that void didn’t last long.

Led by former Ski Show Director Mark Voisard, in April, 2012, some former skiers, eager to carry on the traditions kept alive at the Gardens for over six decades, bought a ramp, some equipment, and formed a ski club. They of course took the name, “Cypress Gardens Water Ski Team.”

For Voisard, the move was a natural one. He had begun waterskiing in Wisconsin at the age of six. By the age of 16, he had formed a water ski club in Eagle River, WI, but he knew he had to join the Cypress Gardens team, which he did in 1977.

“Cypress Gardens was the Mecca,” he said. “That’s where you wanted to be.”

After applying for club status from USA Waterski in 2012, the newly formed team started paying dues and insurance. They found sponsors and a home on Lake Silver, courtesy of the City of Winter Haven, which Voisard says has been very supportive.

The new shows carry on the important legacy of the Cypress Gardens waterski show, which broke 50 waterskiing records during its long run.

“It has a special role because we’re continuing the legacy of the Gardens: to teach the new generation what we know: how to climb a pyramid, how to ski barefoot front and backward, jumping was so big for our show out there,” he said. “We want people to know the Cypress Gardens Way. We were the first ones to do a three-tier, a four-tier and a five-tier. We want them to continue it.”

The new venture had no trouble finding talented skiers, of course, with many Cypress Gardens skiers still in the area. Voisard cites one, Don Tomson, who was the second person in the world to ski backwards barefoot, and the first to carry a girl on his shoulders.

“This area was deemed the water ski capitol of the world,” he said. “And that was largely due to the Gardens.”

Today, Regular Shows have 35 skiers, and the “Work In Progress” show that precedes it also features about 35 young waterskiers.

Not only are traditional Gardens staples like the Aquamaids, hang gliding, the Cypress Gardens Flagline, and ski jumps on display, new things never dreamt of at the Gardens are being shown off.

These include the Flyboard – which propels the user high into the air using a water-driven jetpack –skiers on wakeboards, kneeboards, Sky Skis with hydrofoils, and Sit Skis, which allow disabled skiers to wow audiences and participate in the sport.

With all this, the Cypress Gardens Waterski Team is in demand these days. They do paid shows on the road, heading to Alabama, Jacksonville and the Florida Keys, among other locations.

But locals can pick up the show for free (donations accepted!) at Lake Silver’s Martin Luther King, Jr. Park every third Saturday of the month. The pre-show, through the summer, will start at 5 p.m., followed by the Main Show at 6 p.m.