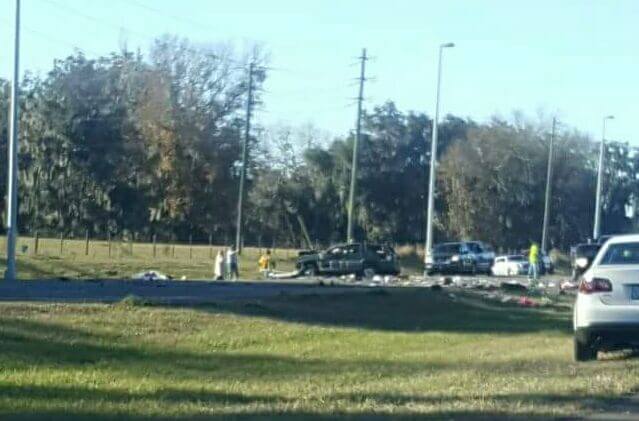 Highlands City, Florida – At approximately 4:10 p.m. this afternoon a crash occurred on US 98 approximately 500 Yards South of Smith Lane (south of the 540A intersection), Highlands City. The crash involved three vehicles with one person who was ejected and subsequently declared deceased by Polk County Fire/Medics on the scene.

US 98 in the area of the crash is a 6 lane highway with a grass median and grass shoulders with break down lanes on the outside edges. It was daylight with clear visibility at the time of the crash.

Interviews and physical evidence shows that a Green Jeep Cherokee driven by 33-year-old Amanda M. Robinson of Wachula was driving northbound on US 98 at a high rate of speed. As it approached another vehicle, the Cherokee drove off the right (east) shoulder onto the grass as it passed other vehicles. The driver of Cherokee lost control, at which time it began to rotate counter clockwise in a northwest direction. It rotated across the grass shoulder and three northbound lanes. Upon entering the center median, the Cherokee began to flip in a “barrel roll” as it continued northwest. During the roll, Ms. Robinson was ejected into the southbound lanes of travel. At the same time as the Cherokee was coming across the median, a Silver Chevrolet Pick-up truck driven by 56-year-old Charles Thivierge of Lakeland and a Black Ford pick-up truck driven by 34-year-old Sommer N. Coy of Bartow (with her daughter as a passenger, 6-year-old Autumn Coy), were southbound on US 98. The Ford was in the le
ft (inside) lane and the Chevrolet was slightly behind it in the center lane. Both drivers saw the Cherokee coming across the median and attempted to move to the right.  The Ford was struck by debris from the Cherokee receiving moderate damage to its driver side. The Chevrolet struck Ms. Robinson as she was ejected into his path of travel. The Cherokee came to final rest in the outside lane of northbound US 98, facing west. The other two vehicles involved came to a controlled stop on the west shoulder of southbound 98.

Excessive speed and reckless driving on the part of Ms. Robinson appear to be factors in this crash.

Traffic on U.S. 98 in both directions was congested during the traffic crash investigation. Southbound lanes were closed for approximately 4 hours during the investigation and traffic was re-routed. Traffic flow was restored at approximately 8:45 p.m.
According to the Polk County Fire Rescue the call for service came in around 4:30pm.