On Monday, October 17, 2016, the PCSO Traffic Unit arrested 37-year-old Jarvis Kendrick of 7513 Jessamine Drive in Lakeland for one count Leaving the Scene of a Crash Involving Death (F-1), and one count Tampering with Evidence (F-3), in the death of 74-year-old Janice Joy, who was hit and killed on the morning of October 6, 2016.

The following is an excerpt from the affidavit, and it is self-explanatory:

“On October 6th, 2016, at approximately 6:30 a.m., the victim, Janice Joy (W/F, DOB: 07/26/1942) was walking westbound on Duff Road in the eastbound travel lane near the south roadway edge. A dark in color pickup truck (later determined to be driven by Jarvis Kendrick) traveling eastbound on Duff Road struck the victim with the passenger side of the vehicle along with the passenger side mirror. This was observed by a witness, Joan Miller. The vehicle then fled the scene, after leaving behind a passenger side plastic mirror cover and broken pieces of mirror glass. The victim was later pronounced deceased at the scene of the crash.

Surveillance video was located confirming a dark in color pickup truck was involved in the hit and run. During the evidence search at the scene, a plastic cover from a passenger side mirror was located. This part was determined to fit Ford F-150s from 2004 to 2008. Information about the crash and the suspect vehicle was released to the media and posted on the PCSO Facebook page.

On October 13th, 2016, an anonymous tip was received indicating a subject by the name of Jarvis Kendrick owns a dark in color F-150 pickup truck and the truck hasn’t been seen since the incident.

Follow up investigation revealed Kendrick resides at 7513 Jessamine Drive, Lakeland, Florida, which is in the immediate area of the crash scene. A check of the Florida Driver and Vehicle Information Database revealed Kendrick owns a 2005 Gray in color Ford F-150 pickup truck, bearing Florida tag JB326J.

Contact was made with Kendrick’s employer, MidFlorida Credit Union, and it was learned that on October 6, 2016, Kendrick should have been traveling to Long Boat Key from the Lakeland area for a meeting that was scheduled to start at approximately 8:45 a.m.

An ATM surveillance video from the MidFlorida Bank located at Hwy 98 N and Duff Rd in Lakeland was located that showed Kendrick removed money from the bank at approximately 6:40am on October 6, while operating a dark in color Ford F-150.Also on the same date, video surveillance video from Longboat Key Golf Club located at 301 Gulf of Mexico Drive in Longboat Key showed Kendrick arrived in Longboat key at 08:34 hours and showed the truck he was operating was missing the passenger side mirror.

Further investigation revealed, on October 9th, at approximately 11:20 p.m., Kendrick reported a traffic crash to the Florida Highway Patrol where he alleged he went off of the roadway and impacted a road sign on I-4 eastbound just west of the McIntosh Road exit, in Plant City, Florida.  He alleged this resulted in an impact to the left break-away sign post to the center front of the Ford Pickup truck, and that this impact caused minor damage to the front center of the pickup truck, according to the report.

On October 10th, the suspect reported the crash on I-4 to his insurance company, and they confirmed the reported date of the crash was October 9th, and that the vehicle was located at the Jarrett-Scott Ford body shop in Plant City with repairs pending. Traffic Deputies made contact with the body shop at Jarret Scott Ford and they confirmed no repairs have been made, but the passenger side mirror was on the list of repairs needed after the reported crash on I-4.

Contact was made with FHP Trooper Edge (I.D. 3636) from Troop C who took the report from the traffic crash. Trooper Edge looked at photographs of the damage to the truck, and he advised the damage to the passenger side was not consistent with the pole strike, as the vehicle would not have come into contact with the right side of the pole and the pole would not have had the ability to remove the mirror in such a manner.

PCSO Traffic Deputies responded to the site of the FHP-reported crash. The crash scene was still in its original condition, and no repairs had been made. While canvasing the scene, no broken glass or mirrors were found from a possible damaged mirror. No evidence was found to suggest a mirror was left at the scene. Tire marks were located that indicated the truck went straight into the left pole, leaving no reasonable method for the passenger side of the truck to strike the right pole and cause damage to the passenger side of the truck. This crash is still under investigation by FHP.

Kendrick’s truck, upon which they are still conducting forensic examinations;
A TD Bank Drive thru video from October 5, 2016, at 12:10 p.m. (approximately 18 hours prior to the hit-and-run), which revealed the passenger side mirror to be present on the vehicle at that time;
A Sunpass recovered from the truck’s windshield – video from the toll plaza revealed the vehicle traveling through the I-4 connector to Selmon Expressway in Tampa, Florida, going through a toll plaza on October 7, 2016, at 4:37 a.m. (approximately 22 hours after the hit-and-run), and shows the vehicle clearly missing its passenger side mirror.

By the suspect unlawfully and intentionally fleeing the scene of the crash involving death without leaving information as required in F.S.S. 316.062 the suspect did commit the offense of leaving the scene of a traffic crash involving death. By the suspect removing the remainder of the passenger side mirror and delivering the vehicle used in the commission of this crime to a body shop in an attempt to repair it to cover up damage from the crash, the suspect unlawfully and intentionally tampered with physical evidence.”

Kendrick was taken into custody on the aforementioned charges, and booked into the Polk County Jail. The investigation is ongoing. 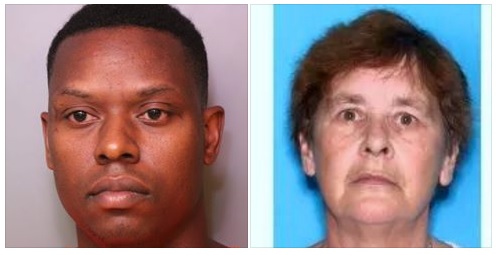