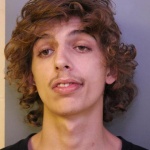 Lakeland, Florida – According to Polk County Sheriff’s Office reports on 09/27/16 at approximately 9pm , Ronnie Perez was involved in a verbal argument with his stepson, William Ramos 19, regarding Perez verbally arguing with his wife, Anna Mireles, which William Ramos did not agree with.

During the verbal argument between Perez and Ramos, Perez attempted to contact law enforcement by dialing 911. As Ronnie Perez began to dial 911, Ramos allegedly pulled the telephone cord, which resulted in the telephone cord being disconnected from the back of the telephone itself.

Ramos then allegedly went to his bedroom and retrieved a BB/pellet hand gun, returned to the front of the residence where Ronnie Perez was located, and began firing the BB hand gun at Perez. Perez reportedly was struck by the BB/pellets approximately five (5) times in his chest and side of his face. Perez sustained injuries ranging from small lacerations to slight puncture wounds, though no pellets fully pierced his skin.

According to reports when deputies arrived the victim, Perez, was in the street. The victim pulled up his shirt, at which time deputies observed multiple wounds on his chest consistent with being shot with a BB/pellet gun. Deputies then made contact with the suspect, Ramos, who allegedly exited the residence and knelled down on the front porch. According to reports by the Polk County Sheriff’s office the suspect willfully and intentionally defied multiple commands to come down off the un-enclosed porch. Deputies approached the front porch with K-9 , Hammer, during which time the suspect continued to defy lawful commands to step down off the porch. As a deputy moved closer to the porch, the suspect allegedly got up, shouted “Fxxx Yxx”, made a hand gesture with a single finger, then began walking back towards the front door. The deputy along with Hammer, rushed up to the porch to prevent the suspect from re-entering the residence. K-9 Hammer bit Ramos in the area of the right hip while a deputy tackled him taking him to the ground. The suspect continued to defy efforts to be restrained with handcuffs for a few moments until he was overpowered and both hands were secured.

Once law enforcement detained Ramos, verbal consent to search Ramos’ bedroom was obtained. While conducting a search of Ramos’ bedroom, a small clear plastic container containing a green leafy substance was located in plain view on top of a nightstand. The substance tested positive for Cannabis.