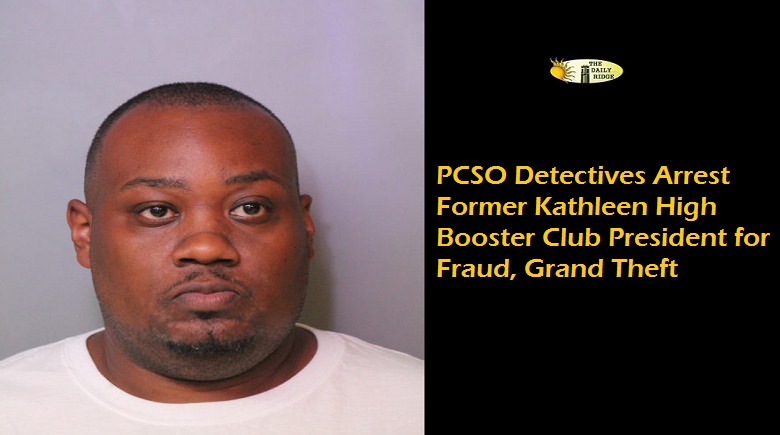 On Tuesday, July 26, 2016, PCSO Fraud Detectives arrested 33-year-old Aaron Wilborn of 1601 Warren Street East in Plant City and charged him with one count Scheming to Defraud (F-3), and one count Grand Theft (F-3), after investigation revealed that from 2014 to 2015, when he was the volunteer President of the Kathleen High School Athletic Booster Club, he used the club debit/credit card to spend over $9,800 for personal reasons. Wilborn is employed by Merlin Entertainment in Orlando.

It is unclear when Wilborn began serving on the board as President, but prior to June 29, 2015, Wilborn was asked to step down from the board by the other board members, who suspected he was misusing the funds. He has not been a board member since then. The board members then contacted the Polk County School Board and ask them to conduct an audit. In turn, PCSB contacted PCSO to investigate.

Interviews with various school employees and volunteers revealed that the normal procedure for Booster Club account transactions is for employees and volunteers to submit a written requisition for reimbursement, along with a receipt to justify a purchase or the requisition request would be completed prior to an expense. The majority of requisition forms completed by authorized volunteers and KHS employees were for trophies, uniforms, and other supplies related to athletics. A few were for food and fuel but with the corresponding receipts and an explanation attached. None of the requisition forms were completed by Wilborn. The documented high school athletic team food purchases were for amounts in excess of $50.00 that would be considered average for a team as opposed to Wilborn’s purchases, often less than $15.00 per transaction as listed on the bank statements.

Aaron Wilborn is not an employee of the school. He was a volunteer President with the Kathleen High School Athletic Booster Club and had access to the Booster Club credit/debit card.

During a non-custodial interview with Wilborn, he admitted to using the Booster Club credit/debit card to pay his Sprint bills, his Geico insurance bill, personal fuel purchases, movie theater purchases, and food purchases. However he stated he thought he was owed the payments since he was using his personal car and using his phone for Booster Club activities. Wilborn said he often paid for food and movies for some of the students. I was informed by the Booster Club Treasurer and Kathleen High School employees that at no time was Wilborn permitted or advised to take students off-campus for food or entertainment.

Due to Wilborn’s illegal actions of unlawfully using the Booster Club credit/debit card as his own for more than 300 transactions, Kathleen High School has sustained a monetary loss of $9,847.74.

Wilborn was placed under arrest without incident and transported to the Polk County Jail.