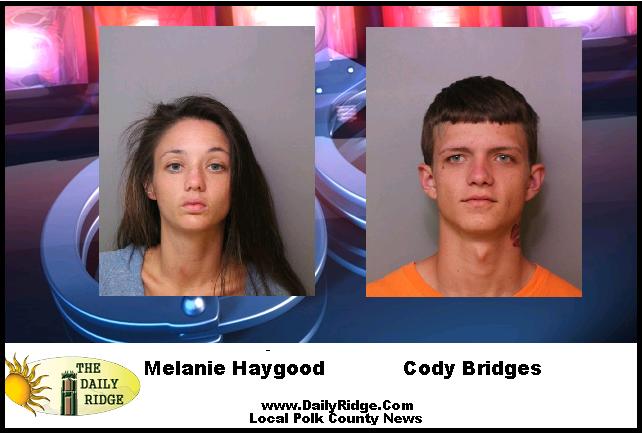 Lakeland, Florida – On 07/01/2016 a Polk County Sheriff’s Deputy  responded to a residence on Lunn Woods Way, Lakeland, in an attempt to locate Cody Bridges, DOB 10/28/1996, who has a felony warrant for stolen vehicle out of Hillsborough County Florida. When the deputy arrived at the residence he observed the vehicle Bridges was last known driving, a 2016 white Ford Fusion. The deputy backed his vehicle away from the residence and called, via radio, for backup. As he was waiting for other units to arrive he observed the white Ford Fusion driving towards his location. The deputy activated his lights on his marked patrol car in an attempt to conduct a traffic stop. As soon as he activated his emergency lights the Ford Fusion allegedly gained speed towards the patrol car. The deputy positioned his vehicle diagonally in the roadway in an attempt to block the vehicle from fleeing. As the Ford Fusion approached the deputies vehicle the Ford Fusion went off the road into soft ground and began to “fishtail”. The driver of the Ford Fusion then allegedly intentionally struck the front of the deputies marked patrol car. The push bar on the vehicle caught the back bumper of the Ford Fusion and pulled the patrol car into a ditch. The Ford Fusion then continued to flee. As the Ford Fusion fled the deputy recognized the driver to be Melanie Haygood, DOB: 5/20/1992. The deputy knew Haygood in the past and have been actively looking for her as well due to her having a court ordered pickup order for a Marchman Act ( is a means of providing an individual in need of substance abuse services with emergency services and temporary detention for substance abuse evaluation and treatment when required, either on a voluntary or involuntary basis). Haygood & Barnes continued to flee deputies into Hillsborough County via Pipkin Rd. and eventually Hwy 92.  During this time several deputies in marked cruisers allegedly tried to provide a traffic stop with flashing lights and sirens.

As the vehicle came to the intersection of Hwy 92 and Park Rd N. in Plant City, Hillsborough County, the Ford Fusion attempted to make a right turn onto Park Rd N. from Hwy 92 and lost control. The Ford Fusion went into the southbound lanes as it was turning North. As the driver began to correct the vehicle deputies successfully stopped the Ford Fusion using the Precision Immobilization Technique (PIT). At this point the driver of the Ford Fusion, later confirmed to be Melanie Haygood, and the passenger of the Ford Fusion, later positively identified as Cody Bridges, got out of the Ford Fusion though the driver’s door and began fleeing on foot. At this time a deputy gave aloud verbal commands to stop running or he would deploy his K-9 partner, Gauge. Both subjects continued to run and K-9 Gauge was deployed. Cody Bridges was apprehended by K-9 Gauge. Melanie Haygood was apprehended shortly after by additional deputies that arrived on scene.