UPDATE TO MULBERRY HIT AND RUN

UPDATE TO MULBERRY HIT AND RUN

Polk County Sheriff’s Office Traffic Homicide have located the suspect vehicle and have made an arrest in the pre-dawn hit and run investigation reported earlier today.  Details about the arrest will be provided later.

Currently, deputies continue to seek witness information in this investigation. 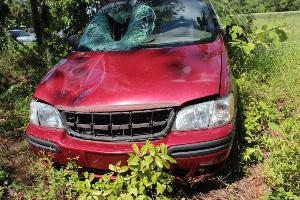 Polk County Sheriff’s Office Traffic Homicide deputies are asking for the public’s help in a Hit and Run Traffic Crash involving the serious injury of a pedestrian.

At approximately 5:26 am, Thursday, June 2, 2016, deputies were notified of a white male lying in the road at Highway 60 West and County Line Road, in Mulberry.

Upon their arrival, deputies learned the victim had been struck by a vehicle which fled the scene.  The victim has been transported to Lakeland Regional Health and is listed in critical condition.  His identification has not yet been confirmed.

Anyone with information about this investigation is urged to contact the PCSO at 863.298.6200.

Westbound lanes of Highway 60 remain closed at this time.