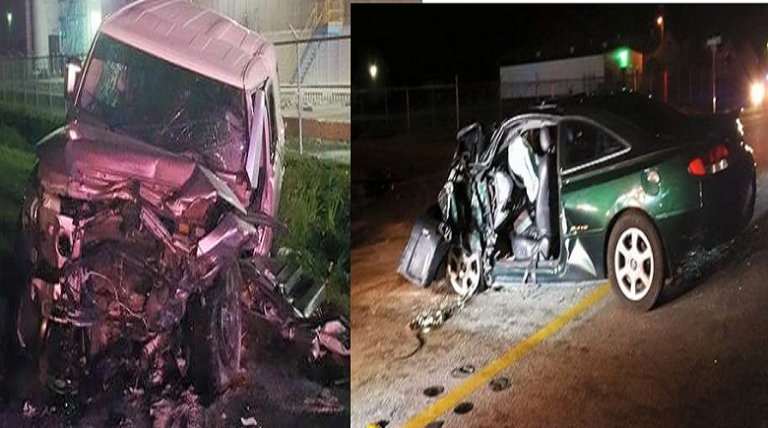 At approximately 4:30 pm, on Friday, February 26, 2016, 18-year-old Dominique R. White of Auburndale was traveling eastbound on Recker Highway in a purple, 1998 Chevrolet Cavalier and was slowing down as she reached the intersection of McKean Street in Auburndale.

At approximately the same time, 50-year-old Samantha La Vonne Hienerman of Winter Haven, was traveling westbound on Recker Highway and was approaching the intersection of McKean Street, she was driving a silver, 2007 Toyota FJ Cruiser.

50-year-old Lemoine Charlemond, of Winter Haven, driving a green, 2000 Toyota four-door, was also headed eastbound on Recker Highway and was behind White in her Cavalier.

For unknown reasons, Mr. Charlemond suddenly veered to the left as he approached the Cavalier and entered into Hienerman’s lane of travel.

Polk County Fire Rescue responded to assist. Mr. Charlemond was entrapped in the vehicle initially. Once he was extricated, he was taken to Lakeland Regional Health by ground. However he was declared deceased upon arrival. Both Ms. Hinerman and Ms. White were also taken by ground to LRC. Ms. Hinerman is currently listed in critical condition. Ms. White is listed in stable condition.

Mr. Charlemond and Ms. Hinerman both appeared to be wearing their seatbelts at the time of the crash. It is unknown at this time if Ms. White was wearing her seatbelt. Airbags deployed in Mr. Charlemond’s Toyota and in Ms. Hinerman’s Toyota FJ.

Initially, impairment does not appear to play a role in this crash. It is unknown if distracted driving was a factor at this time.

Recker Highway and McKean Street were closed for several hours during the investigation.

The investigation is ongoing,