His Paintings Are Created “Like A Dream”, And They Won Him Best In Show At Bloomin Art Festival

His Paintings Are Created “Like A Dream”, And They Won HimBest In Show At Bloomin Art Festival

An old man drums upon a set of plastic containers, while a young boy behind him plays a drum. Behind them stands a bear. Next to them looms a broken Greco-Roman sculpture. Towards them crawls a four-legged robot.

What does this odd scene mean? What do these eclectic images represent? Isaac McCaslin may have painted the picture, but even he doesn’t know exactly what it means. He tends to create his artwork first, then gives meaning to it later.

McCaslin spends a long time designing and creating his artwork. Often, his art focuses on cycles of life and destruction. As to the deeper meaning behind it all, he prefers to let other people approach it “like a dream” and interpret it for themselves. 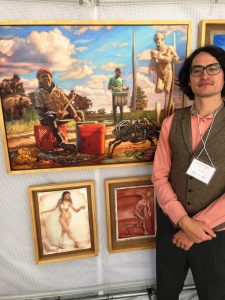 “I never had a [thesis] sentence planned out,” he explained. “Usually, what happens is I actually do not get to a concept until the painting is done. That is when I look at it and interpret it, just like a dream.”

Such a unique perspective allowed his artwork to earn him the Best of Show award at the Bloomin Art Festival in Bartow. Having attended the annual two-day art show for the past two years, being able to win first place during his second visit was a real treat for him.

A graduate from Savannah College of Art and Design, McCaslin loves being able to attend the event. He loves the town and considers it a scenic getaway from his long hours within his art studio.

“I have been cooped up in the studio lately,” he said. “It is nice to go out and go to a show and get everyone’s feedback to see what they see. And to get recognition from the judges means a lot to me.”

Bartow hosted its annual Bloomin Art Festival last weekend. More than 100 vendors set up booths downtown to showcase their artwork. Their art ranged from simple paintings and sketches to more complicated pieces such as kinetic sculptures.

The two-day art festival has been hosted for the past 49 years, with its 50th anniversary being hosted next year. This year’s event was hosted alongside other concurrent events, including the quilt show at the museum and the flower show on Saturday, and a car and jeep show on Sunday. 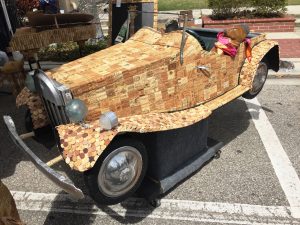 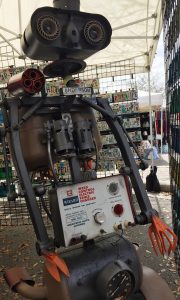 With a long-standing commitment towards respecting artists and showcasing quality artwork, the annual art show has maintained a reputation that has allowed it to grow each year, explained Linda Holocomb, Executive Director of Main Street Bartow.

“This year seems to be larger and better than last year,” she said. “We treat artists exceptionally well, they love coming to the show. They love the hospitality of Bartow and Main Street. The level of art is very nice. We have a great mixture. Everyone enjoys it.”

The Bloomin Art Festival offered awards to select art pieces. Here are a few of the other winning artists:

Winning second place was Marilyn Valiancourt for her “wearable sculptures.” While some people would call her art “jewelry”, she prefers to call them sculptures that they can wear. 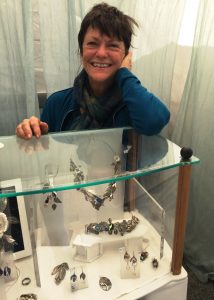 Everything she creates starts from a sketch from a piece of silver. She then uses silver sheets to craft them. What results are unique “wearable sculptures” that can’t be found anywhere else, not even at a jewelry store.

Originally, she started creating her art pieces several years ago as a way to promote a patent for earring backings. One thing led to another, and now she is creating items that can be displayed either at home or around one’s neck.

“I am inspired by nature,” she said. “Nature moves. The intricate details and textures and colors and movements inspire every technique to create my work.”

Winning third place was Don Stone for his folk-art inspired paintings. After seeing similar artwork in a seaside store more than 20 years ago, he was inspired to create his own. 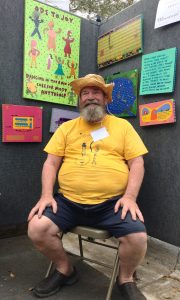 “I love making people smile,” he said. “I love being able to tell stories.” 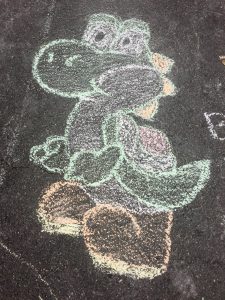 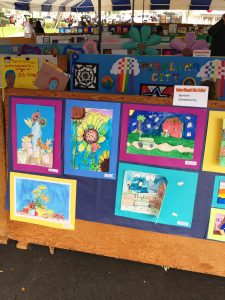