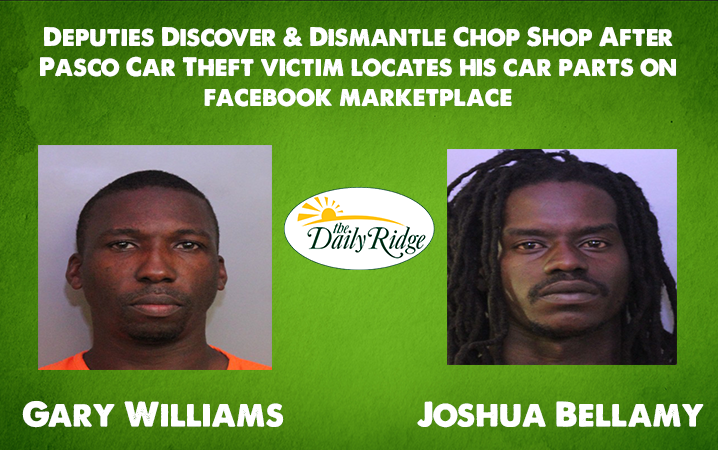 On February 25, 2020, the victim of a vehicle theft in Pasco County contacted the Polk County Sheriff’s Office to report that he found parts of his stolen Ford F350 pickup truck for sale on Facebook Marketplace, and had arranged to meet the seller on Willis Road in Mulberry, Florida.

PCSO detectives began an investigation, and identified the seller – they responded to Willis Road and interviewed him, during which he informed the detectives he purchased the truck parts from someone he met through Facebook Marketplace named Gary Williams.

Detectives immediately identified Williams (DOB 03/25/83) as a suspect who had been arrested by PCSO in 2013 for running a “chop shop,” including several stolen Ford trucks, U-Haul trucks, and other equipment that were dismantled and stored on Hillgrade Road in Mulberry. He was convicted in that case and spent four years in state prison – he was released in April 2018.

Detectives responded to the same property on Hillgrade Road from the 2013 case and spoke with Williams’ grandmother, who owns the property. She told detectives that Gary “brings his stuff” to store there but she doesn’t know if any of it is stolen. During an initial search, detectives located several vehicles with obscured/missing VIN numbers or license plates, vehicle parts, engines, transmissions, stripped vehicle frames, trailers, and heavy equipment such as skid steers.

On February 25th, they obtained a search warrant, and recovered:

On February 26th, they continued to search the property, along with representatives from the National Insurance Crime Bureau (NICB), Lake Wales PD, Tampa PD, and HCSO. Using heavy equipment and agricultural crimes deputies’ equipment, they recovered:

Car bodies, frames, truck beds, doors, and components were strewn about and/or partially buried on the property and wooded area adjacent to it. Three Caterpiller skid steers were also located,and believed to be used to cut trails through the wooded areas and to bury parts. The investigation is ongoing to recover and identify stolen vehicles and vehicle parts.

Williams was arrested and so far has been charged with:

He has 83 previous felonies, 3 misdemeanors, and has been to state prison twice. He was most recently released from prison in 2018.

“An astute car theft victim combined with excellent police work led to the dismantling of yet another chop shop run by a well-known convicted felon, Gary Williams. During our 2013 chop shop investigation, we had to use heavy equipment and dig down 30 feet on this property to find evidence and stolen parts. Williams has proven he will go to extreme depths – literally – to conduct his criminal enterprise.” – Grady Judd, Sheriff

Detectives also found a blue Ford pickup truck in the driveway, that 30-year-old Joshua Bellamy (DOB 05/22/89) advised belonged to him. Inside the truck they found two firearms and two baggies containing cocaine and crack cocaine. They also found a VIN plate from a stolen Ford King Ranch pickup truck from a November 2019 Plant City P.D. case. Bellamy is currently on probation for the sale of cocaine.

Bellamy was arrested and so far has been charged with:

Both suspects are in the Polk County Jail on no bond, and detectives will continue to recover and identify the numerous vehicle parts found on the property, which includes several acres. Further charges are pending the outcome of the investigation.