They’re creepy and they’re kooky, mysteriously spooky, and altogether ooky, they’re the Addams Family. And they made an appearance in Downtown Bartow—sort of!

Ken Mullen, a chalk artist from West Palm Beach, traveled to the city to draw a portrait of the creepy television family on the sidewalk. He was one of nearly two dozen artists who decorated the pavement of the downtown area with chalk during the second annual Chalk Walk Festival.

Mullen loves to create chalk drawings of various properties from popular culture. As the new Addams Family movie will be released later this week, he decided to draw a portrait of the characters from the original television series. 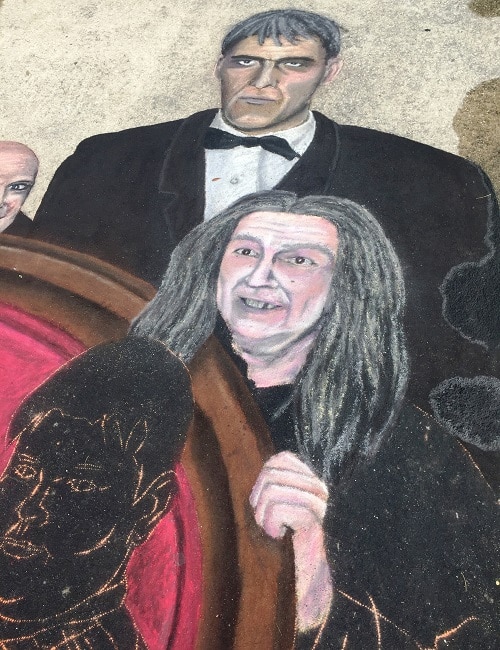 He attended both Saturday and Sunday. Though it rained most of the afternoon during the latter day, the rainy weather did not deter him from his artwork, as he continued working on it after the rain let up.

This was his first time attending the annual festival. The rainy weather none withstanding, he enjoyed being able to attend and looks forward to attending again next year, he said.

“I want to come back, I cannot endorse it more than that,” he said. “I think as good as it could be, considering it rained a lot, but the organizers have been nice and the people have been great. Can’t ask for more than that aside from the weather.”

For the second year, the annual Bartow Chalk Walk Festival drew in artists from across the county, and even from across the state and world, to decorate the downtown pavement with colorful chalk drawings. 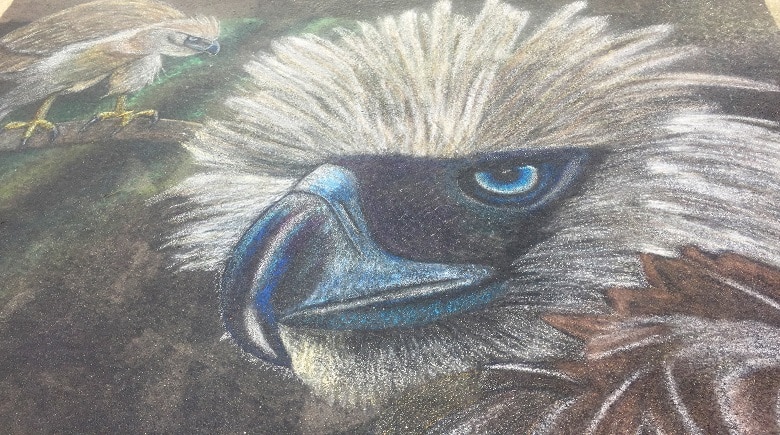 More than 21 artists attended this year’s event. Some were from as close as Lakeland, while others arrived from as far away as Mexico. Together, they helped decorate Fort Blount Park outside of the Polk County Courthouse with drawings ranging from flowers and birds to characters such as the Addams Family and X-Men’s Wolverine.

“We have been doing this for two years,” said Trish Pfeiffer, Bartow City Commissioner. “The neat thing about this event is that it is a new art form to this county. So the street painting is a very popular art form that is globally very trendy…and we are happy to bring it here to Polk County.” Aside from allowing chalk artists to create their art on the sidewalk, the event also drew in several food trucks, local vendors, and live musical performances over the weekend. While Saturday experienced beautiful fall weather, Sunday experienced intermittent rain during the afternoon.

The weather on Sunday forced many artists to cover their work and wait for the rain to stop and continue their work. The overall turnout was also smaller that day than the day before; but overall, the event proved successful for its second year, Pfeiffer said.

“It is a little tough because of the rain,” she said. “That was a little disappointing. We hate that for the artists. They worked so hard, so that was our [only] disappointment. We are just going to hope that it doesn’t rain next year. They [the artists] all want to come back, they love coming here, so we just look forward to next year.”

Even in spite of the rainy weather that Sunday afternoon, Pfeiffer has high expectations for the annual event. She hopes that it continues to grow, and she would love to see more than 30 artists show up at next year’s event. 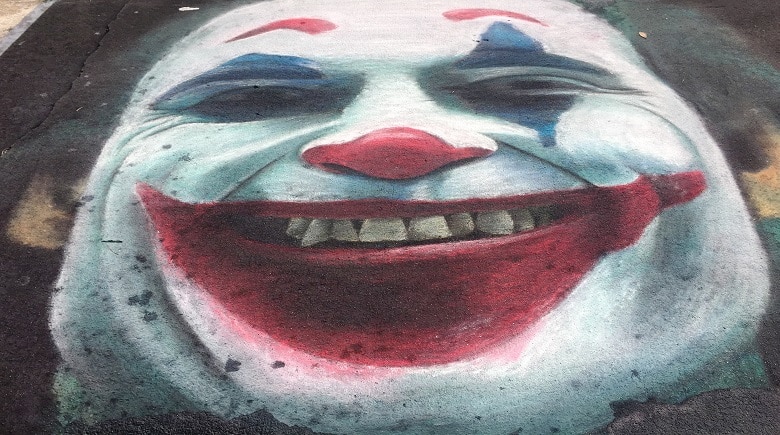 “I love hanging with the artists,” she said. “They are awesome people…[I love seeing] the people’s expression when they see the art on the ground. They cannot believe how detailed it is, how beautiful it is, and they are so excited to see this kind of artform.”

Aside from the nearly two dozen artists attending that weekend, also attending were local bands such as the KitchenKillaz. This musical duo is famous for live streaming their musical performances from different kitchens every Friday evening on Facebook. 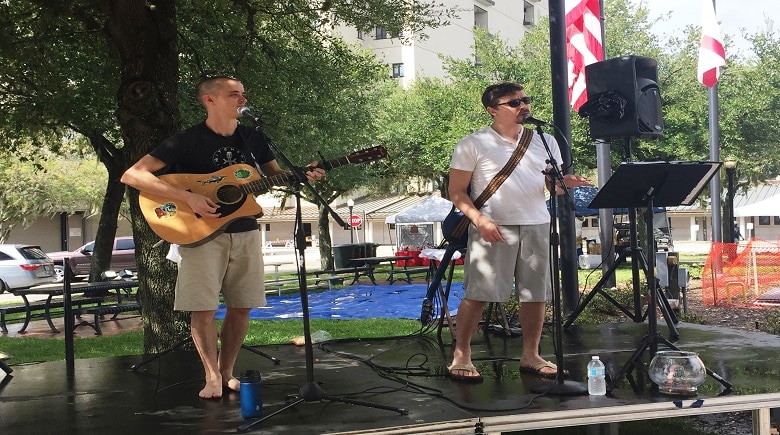 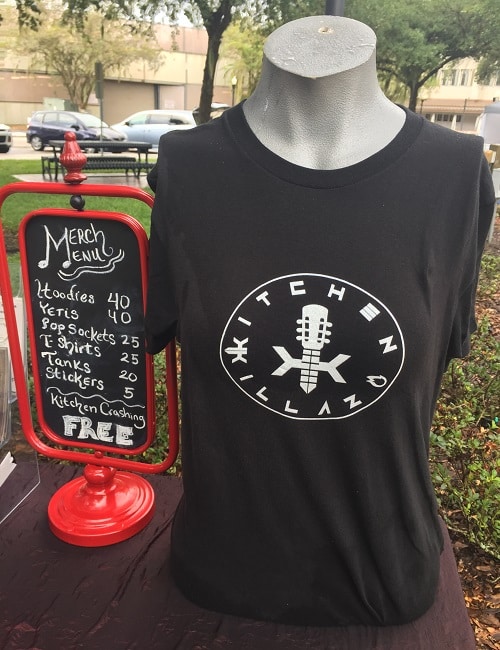 This weekend, they stepped out of the kitchen to serve their hot tunes at the festival. This was their second year attending. They had previously attended for one day last year, and attended the whole weekend for this year’s event, explained Billy Floyd, the leader of the group. 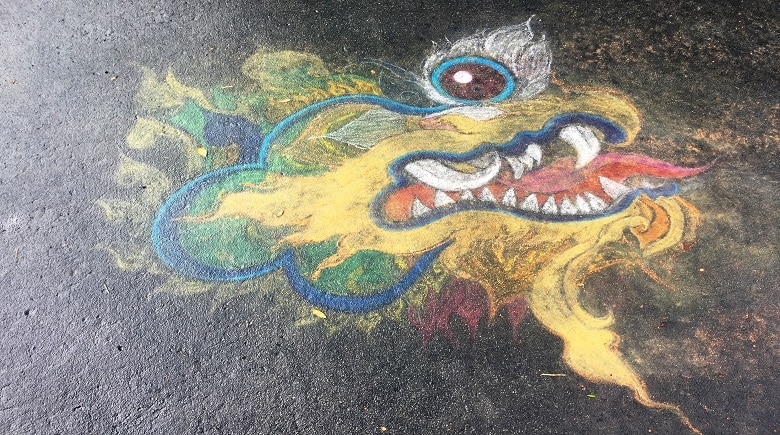 More than being able to perform that weekend, Floyd and his musical partner, The Commodore, loved being able to see the artwork of diverse artists from across the state and world. They also enjoyed some of the food from local vendors such as Unicorn Popcorn.

“I am excited to come back next year,” Floyd said. “It is great to see the large chalk drawings here today…It is a super tiny town that is absolutely packed with a lot of talent, and it is really cool to see them open it up and bring in people from all over the country.” 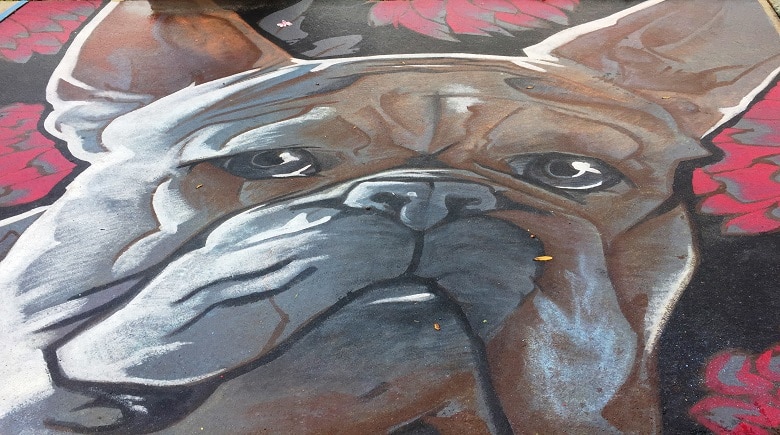