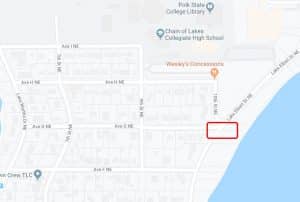 On 9-26-19 at approximately 2:20 p.m., a fifteen-year-old girl was walking along Lake Elbert Dr NE near 10th St NE when a white van driven by a black male who appeared to be 50 – 60 years of age asked her if she wanted a ride.
The teen ignored the man and he continued to follow her asking numerous times about a ride. As the teen continued on in an attempt to get away from the van, the subject pulled the vehicle in front of her and stopped and told her to get in the van.
There were two people in the vicinity who witnessed the encounter and they yelled to the teen not to get in the van. The subject then left the area. The witnesses were able to assist officers with a description of the vehicle as an older white van with tinted windows and the hood ajar. A possible Florida tag number of X4156C was obtained, however it did not match the vehicle.
Investigators continue to follow up the incident. Winter Haven Police have increased patrol presence in the area and also around schools where children would be walking from school.
“We applaud the quick actions of the witnesses in this case,” said Chief Charlie Bird. “Thankfully they were able to spook this guy and the young lady was safe.”
Anyone with any information about this incident or a possible identity of the driver is asked to call Detective Shaquille Haynes at 863-401-2256. Callers wishing to remain anonymous can call Heartland Crime Stoppers at 1-800-226-TIPS (8477).