Three Arrested For Defrauding Republic Services Of Over $150,000 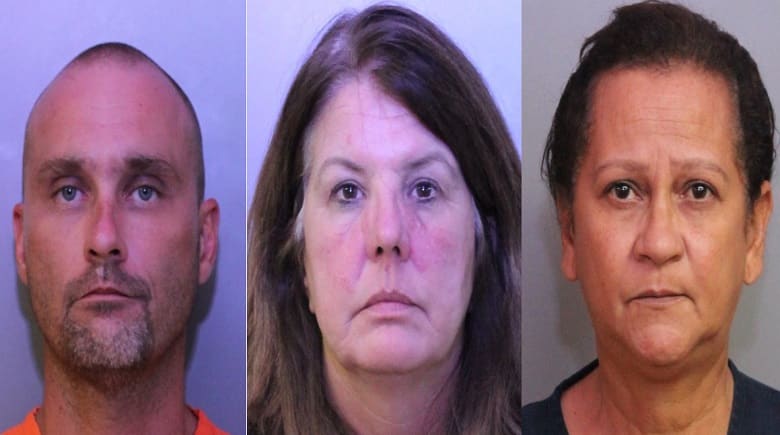 Three Arrested For Defrauding Republic Services Of Over $150,000
PCSO Press Release:
On Monday, July 15, 2019, PCSO detectives working with the Office of the Attorney General Ashley Moody’s Office of Statewide Prosecution arrested 40-year-old Jason Sawyer of Plant City, and “Scrap It” in Mulberry managers 53-year-old Angela Delao & 56-year-old Maria Rosado, for grand theft and defrauding Republic Services in Apopka of over $150,000.00.
In September of 2018, Republic Services became aware of missing dumpers/metal containers from some of their facilities. They began investigating, and learned that a repairman for 2J Fabrications – Jason Sawyer – who was paid to do dumpster repairs for Republic, was seen driving his personal Ford truck and flatbed trailer loaded with dumpsters, heading westbound on I-4.
Republic Services contacted Sawyer, and he told them he had been “given” the dumpsters by someone who worked there, and that he had been scrapping them to Scrap It metal recyclers in Mulberry.
Republic Services’ company policy is that they do not sell their dumpsters, and that they scrap dumpsters themselves. They also do not allow anyone to transport their dumpsters with their own personal vehicle. They contacted PCSO to investigate.
During the investigation, Scrap It provided records showing 23 separate transactions with Sawyer where he was paid a total of $10,788 for the 42 dumpsters he scrapped. The paperwork showed that Sawyer provided expired out-of-state identification for each transaction, and that they paid him an amount over the current scrap price.
The managers of Scrap It were in violation of FSS 538.19 metal recycler not maintaining proper records; FSS 538.26(4) metal recycler purchasing from seller without proof of ownership; and FSS 538.09 (1) acting as a second hand recycler without registration, for each of these transactions.
After paying Sawyer for the dumpsters, Delaow allowed him to come back and paint over the “Republic Services” logos on them. Delao and Rosado then sold the dumpsters for $1,000 each to local businesses.
“These three suspects were pretty bold – Sawyer drives away with 42 dumpsters belonging to a business that trusts him to do repair work, meanwhile these metal recyclers are breaking all kinds of laws related to how they’re supposed to conduct business. We have a great working relationship with most of the secondhand metal dealers and scrappers in the county, but these two just proved to us that they cannot be trusted, and shouldn’t be managing a business.” – Grady Judd, Sheriff
Sawyer‘s criminal history includes 5 previous felony charges, including a 1999 arrest for 2 counts bank robbery, two 2002 arrests for armed robbery and vehicle theft, and a 2003 arrest for vehicle theft.
He was arrested and charged with:
Delao and Rosado were both arrested and charged with:
Delao was additionally charged with Tampering with evidence (F-3) for allowing Sawyer to come back after the transaction and paint over the Republic Services logo so they could be re-sold.
The following is an excerpt from their affidavits, and is self-explanatory:
The investigation has confirmed that Jason Sawyer removed the dumpsters/containers without the consent and/or permission of Republic Services. Sawyer then transported the stolen property from Apopka, Florida to Angela Delao and Maria Rosado (Scrap It Metal Recyclers) in Mulberry, Florida. Sawyer then sold the stolen property to Angela Delao and Maria Rosado at Scrap It. Sawyer received cash money from Scrap It for at least 23 transactions totaling $10,788.00 in money Sawyer received from the sale of the containers. Angela Delao and Maria Rosado would pay Sawyer over current daily scrap metal prices and then would re-sell the stolen property to outside parties in the same condition they were brought in.
The investigation also confirmed Delao and Rosado accepted an invalid Identification from Sawyer for all the transactions. Delao and Rosado also never took the required steps to confirm Sawyer’s ownership of the property.  The condition of several of the dumpsters/containers were clearly not in scrap condition. Delao also allowed Sawyer to return to Scrap It in order to cover up any labels that had shown Republic labels on the dumpsters/containers.
The total loss to the victim located in Polk County was determined to be an estimated $150,016.00.
July 16, 2019