A man with a pyramid-shaped head and one eyes works on a puzzle as he sits atop a mushroom house with eyes peering out through the cracks in the wall.

A tortoise nearly crosses the finish line with a race against a hare, only he’s stopped by the hare with his hand–which also happens to be his foot.

The skeletal remains of a plague doctor examines an egg bandaged up in a forest full of bird cages.

Looking at the nearly surreal artwork of Sketch G, you might think they had originated from Wonderland–mostly because some of them are of Wonderland characters such as the Mad Hatter and White Rabbit.

Indeed, his blending of realistic and surrealistic art styles creates unique art sketches unlike any other.

The most fascinating part? He doesn’t even know what he’s drawing when he’s creating his artwork.

When Sketch G puts pen to paper, he doesn’t even know what he’s going to draw. Instead, he simply lets his hand sketch out whatever it sketches as he thinks about whatever he wants to think about.

What results is a stream of consciousness in which Sketch Gdoesn’t even know what he’s drawing until he’s finished drawing it.

Sketch G considers his artwork a form of meditation, where the very sound of pen on paper mesmerizes him, and in which he is always pleasantly surprised after sitting back and looking at what he has created.

“I love the sound of the pen on paper,” he said. “It is very relaxing for me.”

Some of these art pieces are currently being showcased through his art show, “Urban Fantasy” at the Arts Ensemble Downtown & Outer Space Gallery in Winter Haven.

Sketch G celebrated the reception for his art show on Friday evening. With this being his first show ever, he was quite nervous, but still enthralled at the very idea of having his artwork showcased. 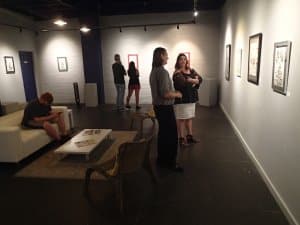 Throughout his life and career, Sketch G has been influenced by the art of Salvador Dali, Maurits Cornelis Escher, and H.R. Giger, with all of their surrealist influences eventually seeping into his own art style.

He has been creating artwork ever since he was a little kid, as far back as he can remember. He attended art school in California, where he has lived for the past 20 years before moving back to Florida six months ago.

“I had an awesome teacher there,” he said. “They taught me a lot of good stuff and allowed me to run with what I came up with. That was the coolest part of them all.”

Recently, Sketch G was involved with the The Door Project, which involved 30 artists from across the state painting 30 doors. Though his involvement with that, he met Curtis Flanders, the curator for the Outer Space Gallery and Studio.

Flanders learned more about Sketch G and his artwork. When he took a look at it for himself, he informed Jane Waters, Executive Director of the Arts Ensemble Education Foundation about it and asked her if they could showcase the art at their gallery.

“When I saw the work, I said ‘absolutley’,” she said. “This is definetly the kind of artwork that we want to see hanging in our gallery. It is very modern and cutting edge. It provokes thought, which is something I am always looking for in arts education.”

Their art gallery, located in Downtown Winter Haven down the street from Grove Roots, helps showcase many emerging artists, especially those that are less-than-mainstream, so Sketch G and his artwork was the perfect match for an art show, Flanders said.

“Our gallery is for emerging artists, to help get them out there, and to help promote them,” he said. “Our goal is to bring in artists who deserve to be shown, and to have their art promoted.”

The gallery is operated by the Arts Ensemble Education Foundation, which serves to act as almost an “arts incubator” and “fuel the arts” within the local community. At least seven residents artists currently take up shop within the art studio creating unique and interesting pieces.

“We are the biggest provider of arts in public places in the state of Florida as a non-profit organization,” explained Waters. “We also do community art programming and art revitalization. So we go into other cities and we do revitalization of impoverished districts through the arts.”

The ensemble currently operates four art programs, including Art For Vets, which allows servicemen and women the opportunity to seek mental and emotional healing by expressing themselves through art.

Recently, they are planning to launch a new program through the county justice system to work with women and children with PTSD as a result of domestic violence to seek similar healing through artwork.

As for Sketch G, he hopes to continue participating in other art shows and events in the near future, and would like to work on a major project such as creating illustrations for a children’s book.

“As far as what the future holds, I just want people to enjoy what I do,” he said.

“Urban Fantasy” is currently on display within the Outer Space Gallery and Studio for one month until June 10. The gallery is located at 230 Ave C SW, Winter Haven, FL 33880. For more information, visit their Facebook page at: https://www.facebook.com/OuterSpaceFL/