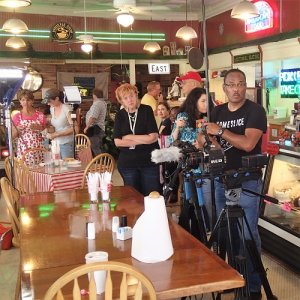 In Historic Downtown Plant City, at the corner of South Collins Street and WJ Arden May Boulevard, stands a rustic old diner called the Whistle Stop Cafe. Here a father and his daughter, along with their friend, sit at a red gingham cloth-covered table within a window side booth as they enjoy their lunch.

The two adults half-finish their hamburgers and fries, while the daughter doodles away at a coloring page upon half-finishing her hot dog and fries. Their female companion gives out a satisfied sigh. She comments how that was the best meal she had ever eaten, even better than her own grandmother’s cooking. 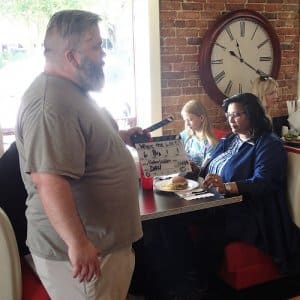 As the daughter finishes her hot dog, the two adults continue their conversation about the man’s recently deceased wife. Both he and his daughter have been on a trip across the state to help fulfill her dying wishes, and their lunch currently serves as a pit stop for their road trip.

Evidently, this is not an ordinary lunch scene at the Whistle Stop. It’s the scene for an independent movie that was being filmed on location at the local resturant last Saturday morning. 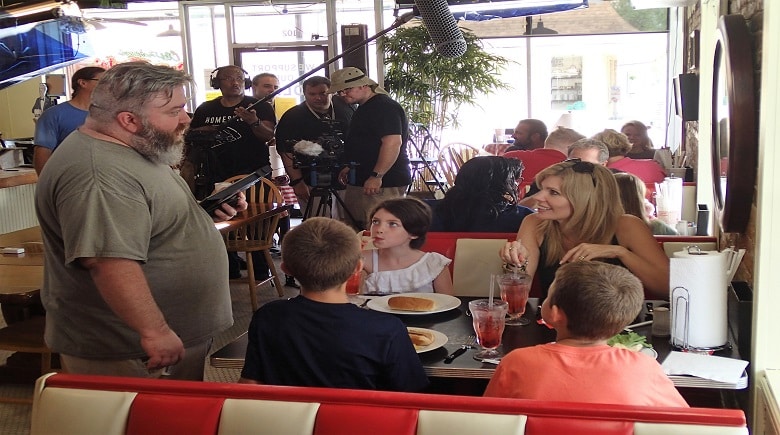 “Where the Land Meets the Sky”, produced by Tallulah Films, is an independent film about a father and his daughter reconnecting with one another during a road trip following the death of the mother.

The movie is being filmed at several locations across Central Florida, including Davenport and Plant City. The lunch scene itself at the Whistle Stop was less than a minute long, but more than five or six shoots were taken within an hour that morning to film it at various angles and to record just the right takes.

Tony Senzamici, the lead actor who plays the father character, Eric Rogers, has eaten many times over the years at the Whistle Stop in Plant City, so being able to shoot a scene there proved to be a real treat for him.

Even then, he appreciates being able to work on small independent films such as this, and he has high expectations for this particular film, the story of which he remains highly enamored by.

“Really looking forward to this film getting some legs,” he said. “I think it has some really good content, and I think it will be a film a lot of people will want to see.”

Cynthia D Perry serves as the second lead actress, playing the female companion of the father and daughter who accompanies them on their journey to fulfill their deceased loved one’s wishes and to reconnect with one another.

Perry traveled all the way from Atlanta to help shoot the movie, especially this particular scene. The journey for her was more than worth it, as she feels that the movie and its underlying message about faith and family is a worthwhile endeavor.

“I think that when people give it a chance, they will love it,” she said. “This is a faith-based film, and we certainly need a lot more faith these days.”

Stealing the spotlight of the movie is Geneva Reynolds, the young 12-year-old actress who plays the daughter character, Rachel, who travels with her father to reconnect after spending many years apart from him.

This is the first time the young actress has acted in a major role, having previously acted in one short film and many school plays. As a child actor, Reynolds of course has to balance her acting career with her school work, which she completes using a notebook that she carries with her on set.

Reynolds loves acting, but she is most looking forward to the film being released, not only so others can see it, but so she can see it as well.

“I am having a really great time,” she said. “I enjoy meeting all the different people and acting on camera.”

Karina Feld, the movie’s producer, made a special cameo apperance with her eight-year-old daughter, Cynthia, sitting in the booth behind the main actors.

She had learned about the Whistle Stop through the movie’s location scouts. When she arrived at the resturant herself, she was amazed by its cozy atmosphere, and considered it the ideal fit for their movie.

“I have never been to Plant City,” she said. “It is beautiful, and the locals are friendly…so I hope this gets people to go in and check them out, because they are a cool little spot.”

Feld had been helping produce such independent features for the past three years. She had previously served as a model in New York City, an actress in Los Angeles and Florida, and later began working behind the scenes in production before eventually taking on her producing role.

While the current movie she is producing is not entirely religious in nature, it does handle themes of faith and family that she hopes will connect with audiences. If the table read for the movie was any indicator, the story contains plenty of emotions that will touch everybody, she said.

Preston Walden, the director and screenwriter, wrote the script for the movie two years ago. As someone who personally knew the owners of the Whistle Stop, having been there several times himself, he felt it the best place to shoot a scene for his film.

“The whole ambience of family just encompasses this place,” he said. “What I love is the different looks. You can do four different location shots in this place alone…even five if you include the counter. It is absolutley wonderful.”

Their film expects to wrap up shooting within the next week, and they hope to eventually release their movie by the end of summer. When it finally releases, Walden expects it to hit big with big audiences.

“It is a wonderful film with its message, that we are hoping that this will connect with a whole lot of people, either with the people themselves or the people that they know,” he said. 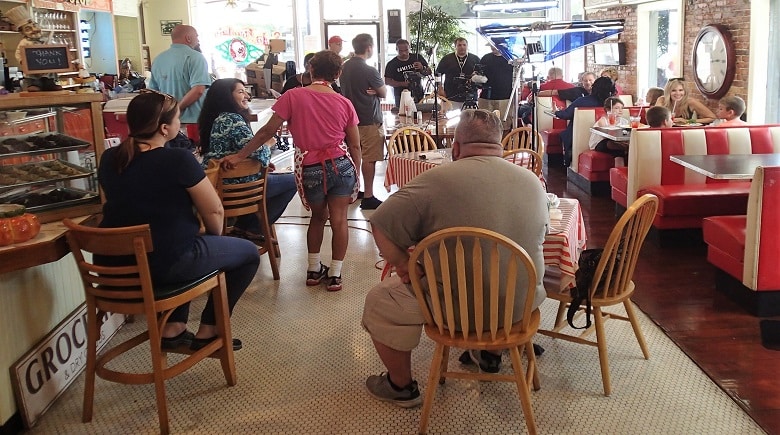 For more information about the movie, visit its Instagram site at: https://www.instagram.com/landskymovie/?hl=en