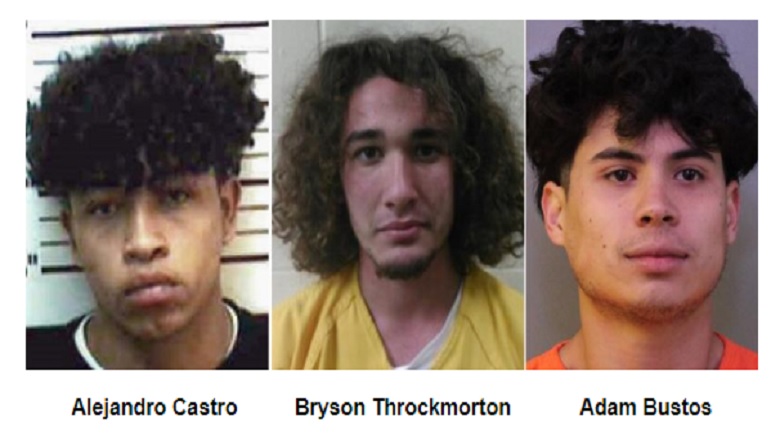 On Friday, February 15, 2019, a Polk County deputy stopped a vehicle for speeding near North Church Avenue and Bridgeport Lakes in Mulberry. That stop eventually led to the arrest of two teens and one adult for their roles in more than two dozen burglaries in southwest Polk County, dating back to November.

During the traffic stop, a 9mm handgun was found on 16-year-old Alejandro Castro, of 3840 Hwy 60 W. in Bartow. The firearm was determined to have been stolen during a trend of car burglaries in that part of the county, so Castro was questioned about his part in the burglaries.

Detectives were able to link Castro to a total of 25 burglaries and a vehicle theft between November and January in the south Lakeland and Mulberry areas. Bartow Police Department was notified after Castro implicated himself in burglaries in their jurisdiction as well.

The investigation identified 16-year-old Bryson Throckmorton of 423 Citrus Highlands Drive East in Bartow, and 22-year-old Adam Bustos of 270 3rd Avenue North in Bartow, as participants in many of the same crimes.

“Thanks to a simple traffic stop and an astute deputy, we got a big break that, at this point, has resulted in the arrests of three people for as many as 25 car burglaries and a motor vehicle theft. It is imperative that these three are held accountable for their crimes and the negative impact they have left on the community.” – Grady Judd, Sheriff.

On January 28, 2019, Castro was the victim of an armed robbery and kidnapping in Bartow, carried out by Adam Bustos. Castro and Bustos had acted together in at least one of the previous burglaries. Castro told detectives that Bustos became upset with him after the Bustos residence was burglarized and Bustos blamed Castro for it.

Bustos and three others were arrested for the robbery and kidnapping, and he was in the Polk County Jail at the time detectives discovered his involvement with Castro’s burglaries.

Castro and Throckmorton were both arrested and transported to the Juvenile Assessment Center in Bartow.