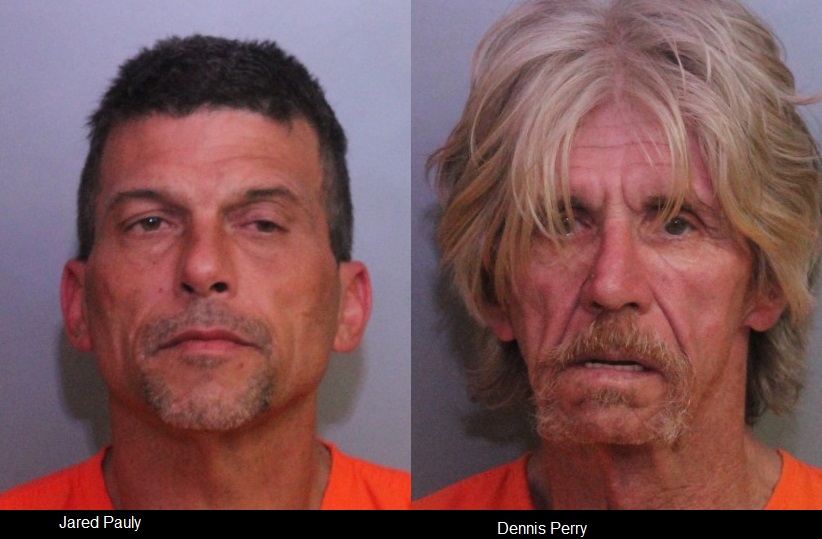 PCSO Release:
On January 15, 2019, PCSO deputies received information that a possible stolen vehicle was located at 1226 Country Club Lane in Lakeland. Deputies responded to the scene and confirmed that the license plate on the blue 2006 Toyota Scion parked there did not come back assigned to the vehicle, and that the Scion was reported stolen on January 4, 2019. The owner of the Scion was in the hospital for an extended period of time, during which his vehicle was stolen.
While conducting surveillance of the residence, deputies witnessed three people leaving the home.  They interviewed all three, and conducted a search of the property, during which deputies found methamphetamine and drug paraphernalia inside the residence.
Deputies arrested Jared Pauley, 48, of Lakeland, who claimed ownership of the residence. He is charged with possession of ammunition by a convicted felon (F-2), grand theft of a motor vehicle (F-3), possession of meth (F-3) and possession of drug paraphernalia (M-1). A check revealed Mr. Pauley has been arrested 41 times in Polk County and has been in state prison 10 times. His extensive criminal history includes grand theft auto, burglaries, grand theft, dealing in stolen property and numerous narcotic offenses.
Deputies also took Dennis Perry, 65, of Lakeland in custody. He’s charged with possession of meth (F-3) and possession of drug paraphernalia. (M-1) Perry’s criminal history includes DUI, drug charges and failure to appear charges here in Florida. He also has been arrested in other states for burglary, resisting an officer, assault and drug charges.
“Mr. Pauley is a habitual criminal who just got out of jail on December 7, 2018. Thanks to a tip, we were able to locate this stolen vehicle, and arrest a career criminal, who has made it pretty clear that when he’s not behind bars, he’s committing crimes.”- Grady Judd, Sheriff
Pauley remains in the Polk County Jail on no bond until a first appearance hearing this afternoon.
January 16, 2019