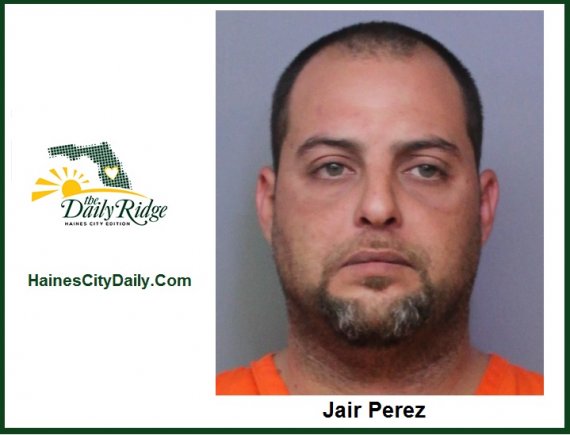 Haines City, Florida – A 35 year old Winter Haven man was arrested about 4pm on Christmas Eve, December 24, in connection with the theft of $732.62 in merchandise and groceries from Walmart in Haines City.

According to a Haines City Police Department arrest affidavit a suspect, Jair Perez DOB:01/29/1983, selected various items in the electronics department, food items and general merchandise. He placed those items in a shopping cart. A Walmart Asset Protection Associate allegedly saw Perez taking off spider wrapping off several tools he put into his cart. At that time the Walmart Asset Protection Associate contact Haines City Police.

Perez took the items in the shopping cart, proceeded to the customer service desk where he returned wipes and Huggies pampers for a refund of $15.41 which was tendered to him in cash. After Perez conducted the alleged fraudulent return he attempted to exited through the grocery entrance at which time he observed an employee checking receipts. Perez then allegedly turned around and proceeded to the general merchandise exit and began exiting crossing all final points of sale without attempting to pay for the merchandise inside his shopping cart. The suspect was apprehended by several officers from the Haines City Police Department along with the Walmart Asset Protection Associate. Perez was escorted to the loss prevention office without incident.

According to the arrest affidavit a criminal history check was ran on Perez which shows he has one prior felony theft conviction dated 12/07/2012 from Lakeland Police Department. Perez allegedly confessed to that he stole the merchandise because he was desperate and does not have a job.

Perez was transported to the Polk County Jail without incident. He was charged with one count of grand theft. Bail was set at $1,000.