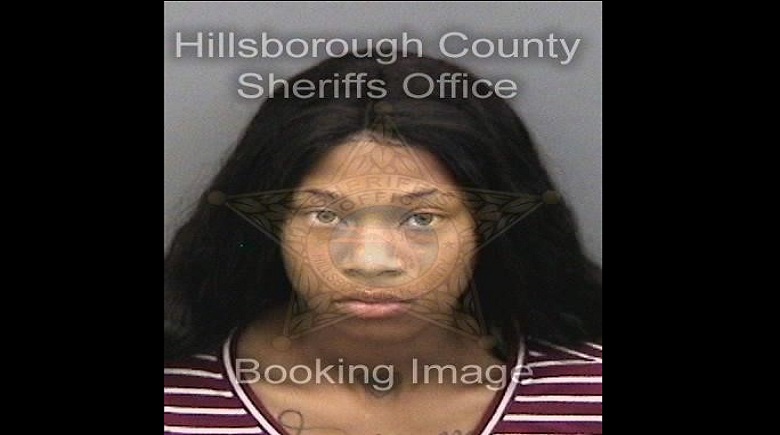 PCSO Release:
The Polk County Sheriff’s Office has charged 21-year-old Tampa resident, Alexcia Calhoun, with grand theft for stealing dozens of cans of baby formula from a Lakeland grocery store. She’s currently in the Hillsborough County Jail following a statewide investigation. The charge was added on Monday, August 20, 2018.
On April 17, 2018 around 6:30 pm, Calhoun and an unidentified woman entered Harvey’s Supermarket, located at 2630 Highway 92 East in Lakeland and headed to the baby aisle.Calhoun put 46 cans of formula in a shopping cart and then proceeded toward the front of the store. The women forced the entrance doors to open and walked out with the stolen baby formula. An employee was alerted and followed them to the parking lot. She asked if they planned on paying for the formula and they quickly entered their vehicle and fled the area, leaving 10 cans of Enfamil Gentlease Baby Formula 12.4 oz. in the shopping cart.
Surveillance video from the April incident and a picture on Calhoun’s Instagram account led to her identification and connected her to the Lakeland baby formula thefts. Calhoun is also suspected of other baby formula thefts at other stores in other Florida jurisdictions.
“Surveillance cameras and social media are great tools in helping us catch criminals. Folks, if you’re going to steal, you’re going to get caught. It’s that simple, so don’t do it.” – Sheriff Grady Judd
Calhoun has an extensive criminal history, which includes grand theft and robbery. She is currently being housed in the Hillsborough County Jail and has additional holds from Manatee and Marion Counties related to baby formula thefts.
Detectives are still attempting to identify the second suspect. Anyone who has information regarding her identity is asked to call the Polk County Sheriff’s Office at 863-298-6200. Or remain anonymous and be eligible for a reward by calling Heartland Crime Stoppers at 1-800-226 TIPS (8477), via the website www.heartlandcrimestoppers.com by clicking on “Submit A Tip” tab, or with your smart device by downloading the free “P3tips” app on your smartphone or tablet.
Click here to see surveillance video.
August 22, 2018