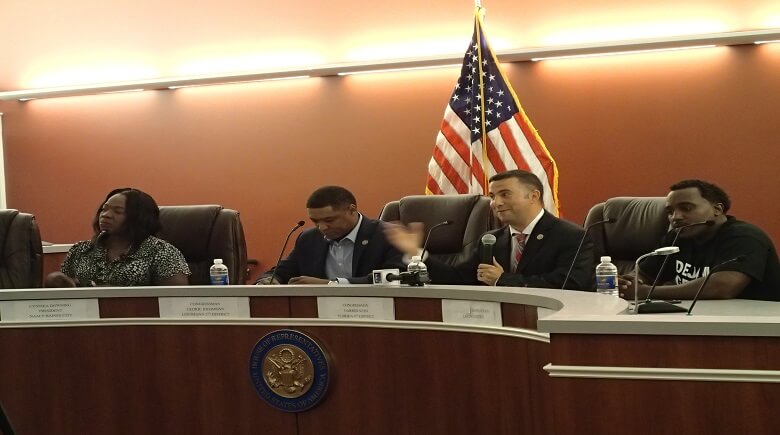 He served only 30 days in jail for his felony, and yet 20 years later at the age of 46, he has still yet to regain his right to vote.

His mother, Johnnie Thomas, attested that her son has been a law-abiding citizen since then, as he remains self-employed, pays his taxes, and retains his driver’s license, yet he is still unable to vote. 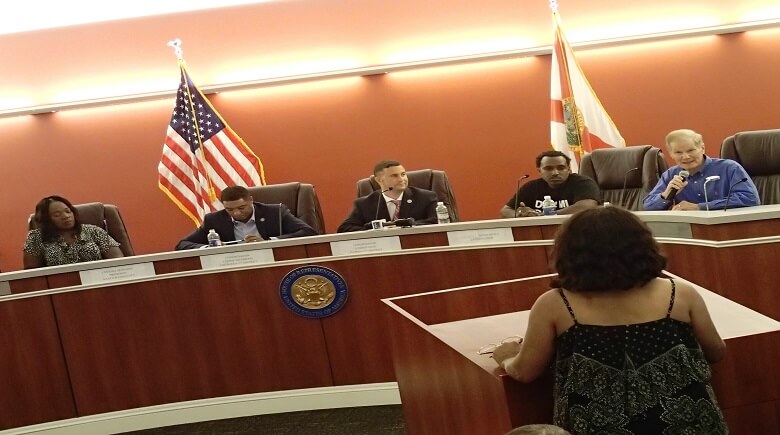 Rep. Soto was one of several local government and community representatives to host the town hall meeting, which included a discussion of topics such as felony voting rights, a pertinent issue concerning a ballot amendment for the upcoming election in November.

Florida Amendment 4, known as the “Voting Rights Restoration for Felons Initiative”, if passed with more than 60 percent of the vote, will automatically restore the voting rights to convicted felons, excluding murderers and sexual offenders, upon the completion of their sentence, be it through jail, probation, or parole.

More than 6.1 million Americans (2.5 percent of the voting population) were disenfranchised due to such felony convictions, including 1.7 million Floridians (10 percent), thus making Florida the state with the highest disenfranchisement rate, according to a 2016 report by The Sentencing Project.

Florida is one of four states not to automatically restore felon voting rights, requiring ex-felons to wait five to seven years before requesting that a state officer or board restore them.

“This is not a normal process,” said Rep. Soto, who is not only running for re-election this year, but is a huge supporter of Amendment 4.

Joining him that evening to discuss such issues were fellow house and senate members, U.S. Sen. Bill Nelson and Cedric Richmond, Louisiana Representative for District 2, and Chairman of the Congressional Black Caucus.

Also joining him at the town hall were Cynthia Downing, President of the Haines City NAACP, and David Ayala, Community Organizer for LatinoJustice PRLDEF.

Ayala knows first-hand the impact of such voter disenfranchisement. Following the completion of his own felony sentence 11 years ago, he has become a law-abiding citizen who has married, maintained employment, paid his taxes, and obeyed all the state laws, yet he is unable to vote for the very people who make those laws.

His inability to vote was especially disappointing for him in 2016, when he was unable to vote for his wife, Aramis Ayala, who ran to be the 9th Circuit State Attorney.

“This affects everyone,” he said. “When you have a state like Florida, and ten percent of the population has been disenfranchised, you know this is a people issue, a human issue that affects everyone in every walk of life.”

Richmond argued that such voter disenfranchisement was a “textbook case” of “cruel and unusual punishment”, as it continues to punish ex-felons even long after the sentences for their crimes have been served.

“If we think about formerly incarcerated friends and strangers, because they made a mistake, they can never participate in democracy, they can never have a voice in the government…and that is another vestige of Jim Crow,” he said.

Sen. Nelson also supports the amendment, claiming that ex-felons cannot be reintegrated into society without having their rights restored.

Former criminals who have done the time have already paid for their crime, and if they are expected to become productive members of society once again, then they must have an easier, rather than a harder, experience to regain the right to vote, he argued.

“I encourage you, if you believe as I do that if you have done your time, you ought to be able to have your right to vote restored,” he said.

Another topic discussed that evening was the U.S. Census, as the 2020 Census, under the suggestion of President Donald Trump and his administration, might include a question asking respondents about their citizenship status.

Such a question has never been on the Census for the past 70 years since 1950, and according to Rep. Soto, this was for good reason.

“We count everyone on the Census,” he said, arguing that such a decision could cost the state millions of dollars, as not every county would receive sufficient preparation.

Rep. Richmond believes everyone living within America deserves equal representation, and thus should not be disenfranchised or left uncounted within the census.

“What makes America great is our democracy, that people have a voice in their government,” he said. “That is what makes this country great: that people from different lifestyles and areas can fight to make it a more perfect union.”