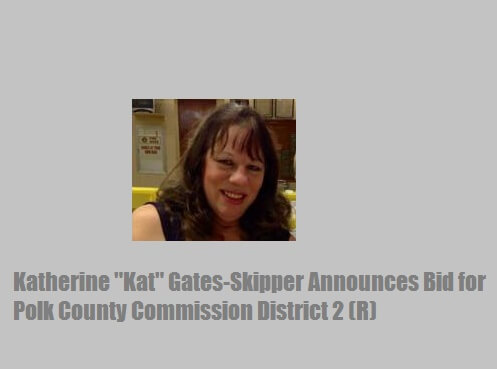 February 10, 2017, (Lake Wales, FL) Veteran, Businesswoman and former Veterans for Trump Florida Chairwoman Kathryn “Kat” Gates-Skipper has filed to run for Polk County Commission. “This past year has reminded me the value in supporting what’s right for our Country.  Running for County Commission is simply a culmination of years of service and recognizing the responsibility of giving a voice to the People,” says “Kat.”
Having served many years in the Marine Corps, both Active and Reserves, and being committed to her hometown of Lake Wales, “I decided that service is the best way for me to show the faith I have in our County and People who live here.  There are many important issues facing Imperial Polk County and I would like to represent the People of District 2 in ensuring we are heading in a forward fiscally responsible direction,” says “Kat.”
Formal Press Announcement (All Press Welcomed)
WHEN: Tuesday, February 21, 2017, 6:00 pm.
WHERE:  Chain of Lakes Complex (Poolside Room)
210 Cypress Gardens Boulevard
Winter Haven, FL 33880
(As part of the Polk County Republican Executive Committee Meeting)
As in the Hymn of the Marine Corps, Kat was born on the shores of Tripoli where she was adopted by an Air Force Colonel and his wife at Wheelus Air Force Base in Libya and became a Naturalized Citizen of the United States at 3 years old. In November 2013, Kat and her Husband were featured in a 2 minute Nationwide Public Service Announcement comparing Obama Care with the troubled VA Medical System drawing a comparison to Nationalized Health Care.
In 2015, Kat’s experience in politics drew the attention of the Trump for President Campaign where she was asked to serve as the Chairwoman of the Florida Veterans for Trump effort. She continues to serve in an Advisory and Voter Mobilization capacity drawing on an array of Grassroots Contacts directed along the I-4 Corridor.
“Kat” owns an Airport Transportation Company, is the Media/Event Coordinator for the American Legion Post/All Veterans Center in Lake Wales, lives in rural Polk County with her Husband Charles, of 12 years, and is the Mother of 4 Children and 4 Grandchildren.  With over 4,000 petitions needed to qualify, “Kat” plans to qualify by Petition.
“Kat” for County Commission Campaign Leadership:
Campaign Manager: Amilee Kalapp, 863-604-0391, [email protected]
Campaign Treasure: Teri Strong, 863-353-8636, [email protected]
Field Director: Debi Bozeman, 863-557-2955, [email protected]
Field Director: Mike Thompson, 863-484-2926, [email protected]
Field Director: Lydia Matteucci,863-280-4100, [email protected]
Candidate: Kathryn “Kat” Gates-Skipper, 863-207-4200, [email protected]
Kathryn “Kat” Gates-Skipper, Republican Candidate, Polk County Commission, District 2.
Donations can be made out to:
“Kat for County Commission”
and mailed to:
3713 Skipper Trail
Lake Wales, FL 33898
February 13, 2017